Preparing students for the real world 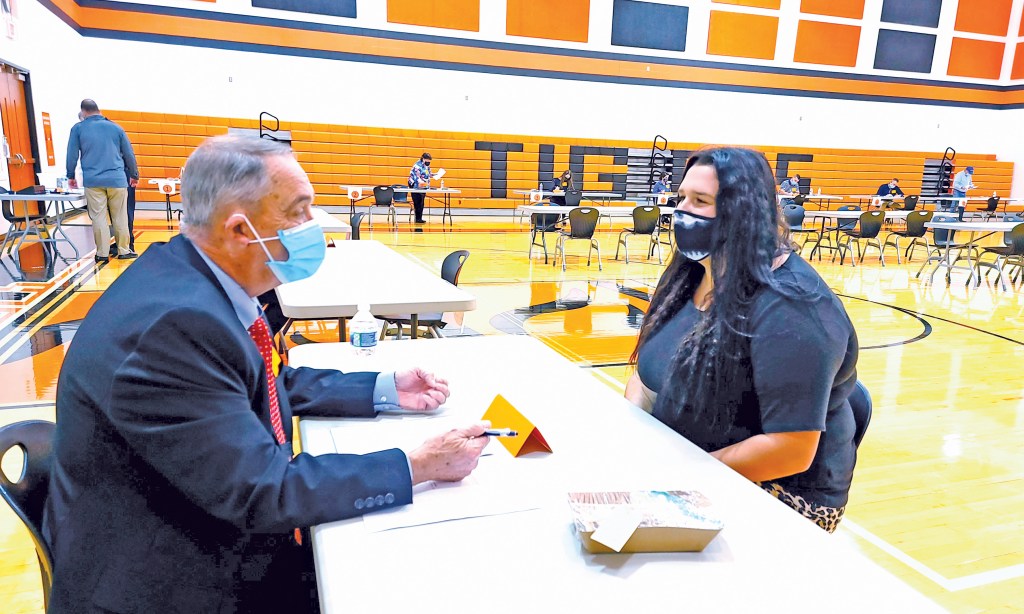 Katelyn Cecil, a junior at Ironton High School, is interviewed by Dave Lucas, of Dave Lucas Communications, on Wednesday as part of classes that the school developed so students would know how to present themselves during a real job interview. (The Ironton Tribune | Mark Shaffer) 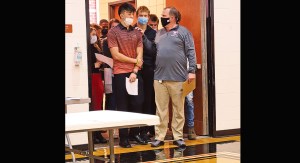 Ironton High School teacher Doug Graham gives a quick pep talk to a student before he goes to do a mock job interview on Wednesday. The students take several classes on everything from building a resume, how to dress and act in interviews and other job building skills. (The Ironton Tribune | Mark Shaffer)

IHS classes teach students how to apply for a job

Sweaty hands, nerves on edge, trying to remember to smile, trying to say the right thing and figuring out how to correctly answer the infamous question of “Where do you see yourself in five years?” — no matter your age or experience, everyone who has sat through a job interview knows how nerve wracking it is.

At Ironton High School, they have nine weeks of classes to help students get comfortable with going through an interview before they actually do one to get a job. That includes everything from putting together a resume to how to dress and behave at the interview.

Doug Graham teaches a class on career research and does the nine-week classes with teachers Tomi Linter and Kris Billing.

He said that in the first semester, they teach juniors and in the second semester, the seniors are taught a variety of subjects they will need in adult life such as finance, resume building and other things to get them acclimated to taking their first steps towards a career.

“As you’re talking, you’re thinking ‘Is this the right thing I’m saying?’ and you’re nervous, you’re shaky, you’re sweating,” he said. “It’s always an awkward situation, whether it is your first one or you’ve done 15.”

He said the goal is to teach them how to get comfortable when it is uncomfortable, to be confident in being uncomfortable and to project that confidence to the interviewer.

They also teach them some of the basic questions that everyone gets in an interview such as what their goals are and where they want to be in five to ten years.

They are also taught to ask about job hours and responsibilities, but to avoid starting off with questions like how much the job pays.

On Thursday, a batch of juniors gathered outside the doors of the gym and steeled themselves to go through mock interviews with one of 15 interviewers, all of which have long held management positions or are business owners.

The interviews are brief, 10-15 minutes long. The first part is question and answer and then the students ask questions as they’ve been prepped to do. Then the interviewer does a recap with the student, going over what they did well and what they need to improve on.

“Often, we find by the time the student has done their third interview, they are 100 percent more comfortable than they were in the first one,” Graham said.

Chianti Martin, who did his practice interview with Ironton Fire Department chief Moose Mahlmeister, said he wasn’t too nervous.

“There is a little bit in your belly that gets you, but you just have to sit down and have a good conversation with the person,” he said. And it helps that he already knew Mahlmeister. “He’s a good guy.”

Martin said that the teachers did a good job of getting them ready.

“They really put it in our heads: Good handshake, have good, mannerly talks and things like that,” he said. “They worked really hard and we had to let it show.”

He had never gone through a real interview for a job because he has been busy with school and being in football, basketball and track.

Tayden Carpenter, on the other hand, said he was nervous.

“It’s just a light interview, but there are a lot of distractions and I got a little bit nervous,” he said. His interview was with Jerry Rowe, who owns several businesses including The Armory, Frisch’s Big Boy, ServePro of Kentucky and West Virginia, and R&R Restorations. “Once I got to talk to him a little bit, I was feeling way better.”

He said he enjoyed learning what to do before he applies for a job.

“This was very helpful,” Carpenter said. “I think it is going to be very helpful, I will know what to expect, how to dress and how to talk to people. It will help a lot.”

He also hasn’t gone through a job interview because he is on the football, basketball and tennis teams.

Katelyn Cecil wasn’t nervous about the mock interviews, since she has had two real life job interviews and has a job at Little Caesars. She also plays basketball and runs track.

“I am still nervous because it is a different person I am talking to,” she said. “But I give myself a little pep talk and go through with it.”

She said the classes would have helped when she interviewed for jobs at two different fast food places.

“I didn’t know what to do, so I just answered whatever they asked me, I didn’t make eye contact, I did not write a thank you note,” Cecil said. “Doing these mock interviews, it has helped me so much with what the real world will be like and what job interviews will be like.”