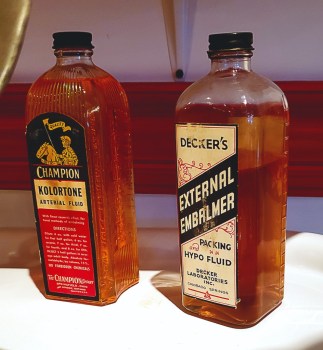 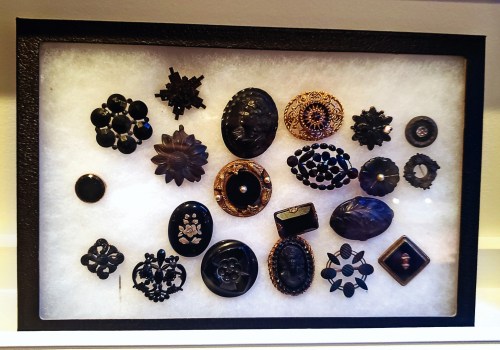 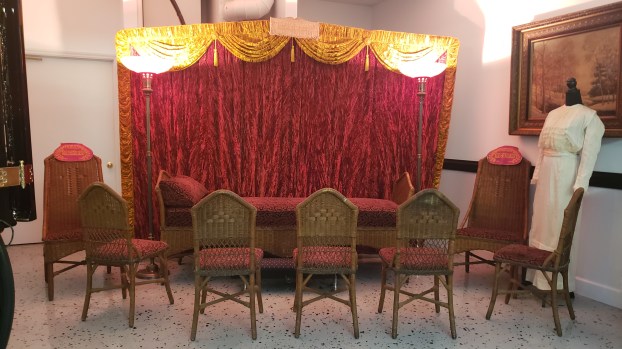 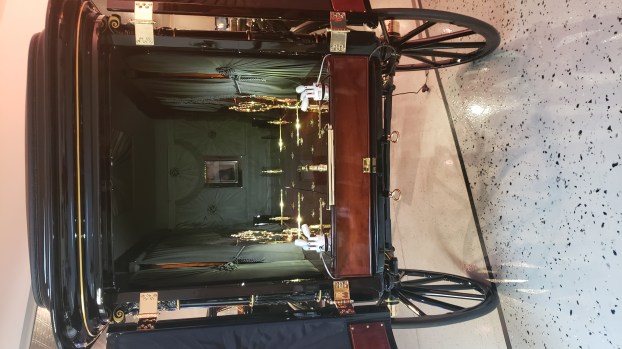 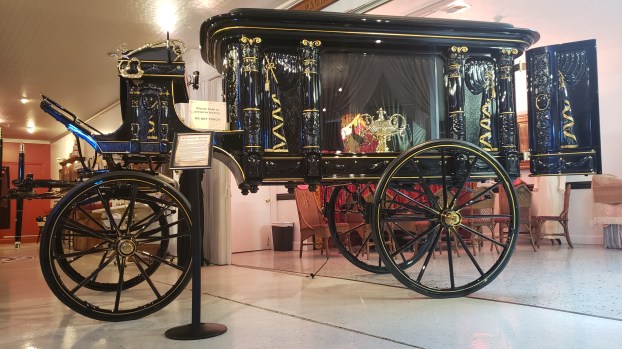 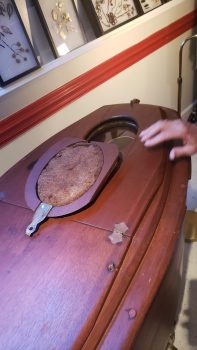 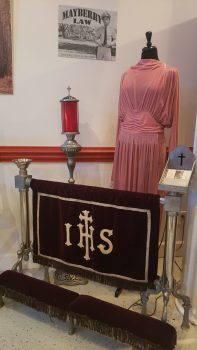 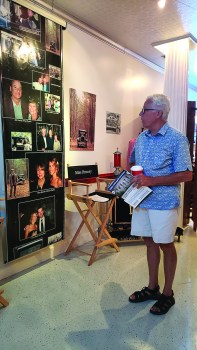 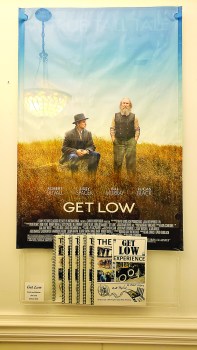 From an early 20th century embalming table lined with tools and tinctures to a collection of ornate mourning jewelry, the Cawley & Peoples Mortuary Museum in Marietta, Ohio offers a one-of-a-kind tour through the history of the funeral experience. The facility, owned and operated by long-time funeral directors Bill and Patricia Peoples, with assistance from general manager Brian Scharff, is full of rare items like antique caskets, elegant burial gowns and mobile kneeling altars from the pre-funeral home era.

“In those days, there weren’t funeral homes,” said owner Bill Peoples. “There were undertakers and morticians, but the funeral services were held at homes. They would load up in big black suitcases and take everything to the house. They would set up the drapes to keep the light out, and the funeral beds for visitation services, and when the casket would arrive a few days later, they would then load the body in for burial.”

Many of the items in the museum date back to the mid to late 1800s, a very different time for the funeral industry. One such item on display is an Ice Box Coffin from the 1850s.

“These were only used for about 20 years, before they knew anything about the embalming process. Embalming started around 1865 during the Civil War, but before that, they had to preserve the body somehow. They would fill these with ice and lay the body on top. There’s a door at the bottom that opens so you could reach in and feel the toes of the body, to make sure it was still cold.”

Donated by a professor in Michigan, an immense collection of vintage mourning jewelry from the early 1900s lines one wall of the museum.

“Back then, when somebody would die, a lot of times the ladies would wear black jewelry during the mourning period and services. Sometimes it was carved out of coal or onyx. Other times they painted their own jewelry black. And some are even made from human hair. They would cut off a lock of hair (from the deceased), braid it into floral patterns, and mount them in shadow boxes to commemorate the person’s life.”

The rare jewelry, early embalming tools and antique caskets on display are certainly impressive. But upon entrance, visitors are immediately captivated by the museum’s collection of antique funeral cars, each one restored to pristine quality. A 1934 Studebaker President named “The Westminster” is the last surviving model of only six, making it a priceless, one-of-a-kind classic. A 1940 Henney Packard, one of the last three ever made before the company retooled to help with World War II efforts, still gets driven to events around Marietta. One of People’s vintage funeral cars, a 1927 Henney, even made it onto the set of the feature-length film “Get Low,” which stars Robert Duvall as a mountain hermit who throws his own funeral party while still alive, and Bill Murray as a mortician who smells a big payday from the stunt. The museum features a section dedicated to People’s experience on the film, including a signed script by all the actors and his own personal director’s chair.

“I said no several times, but eventually agreed to it. They filmed the movie around Atlanta, so the deal was I would take it down in my trailer and I stayed there every day for six weeks, protecting my car. I wanted to make sure there were no high speed chases or shootouts. I’m glad I did it. I wouldn’t do it again, but it was a great one-time experience.”

One of the most immaculate items in the museum is a full-size, horse-drawn funeral coach from the pre-automobile era. Hand-carved from wood in 1895 in Cincinnati, the impeccable piece is a historic work of craftsmanship. Near the carriage is a large wicker basket, which happens to be the origins of a popular term still used today.

“When the undertakers went to the family home, if the body couldn’t be embalmed or viewed for whatever reason, that’s what they would use to carry the person out of the house. They would attach the basket to the underside of the coach. And that’s where the term ‘basket case’ comes from.”

Despite the somewhat macabre peripheral subject matter associated with mortuaries, Cawley and People’s Mortuary Museum is anything but morbid. Completely centered on the historical aspects of the funeral business and the evolution of the ceremonial process, the museum and tour is a fascinating exploration of one of the most universal human experiences. That’s not to say the museum doesn’t get a different kind of visitor every now and then.

“We get some of the gothic crowd sometimes,” Peoples says with a smile. “Some calls around Halloween from people wanting to perform seances here. But we don’t do that kind of thing. I think the vast majority of our visitors appreciate what we offer, which is the historical aspect of it all. They leave here with a good feeling.”

To schedule a tour of Cawley and Peoples Mortuary Museum, call 740-373-1111 or visit cawleyandpeoples.com.