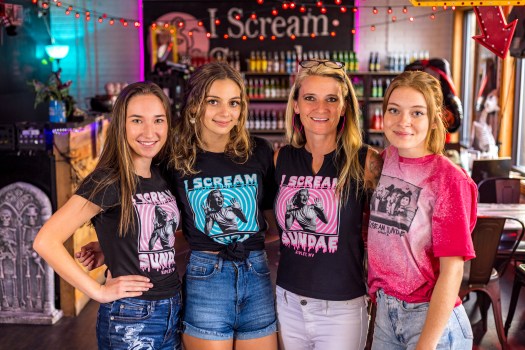 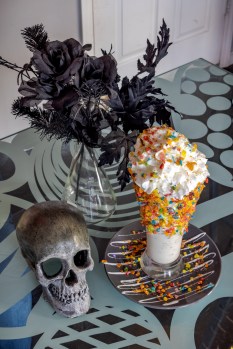 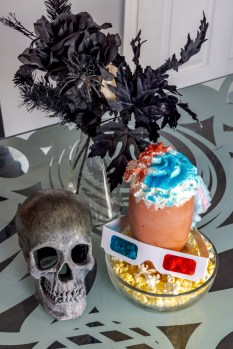 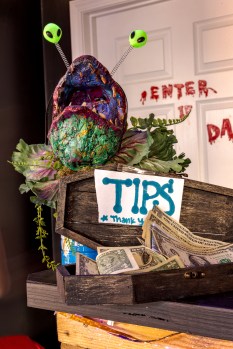 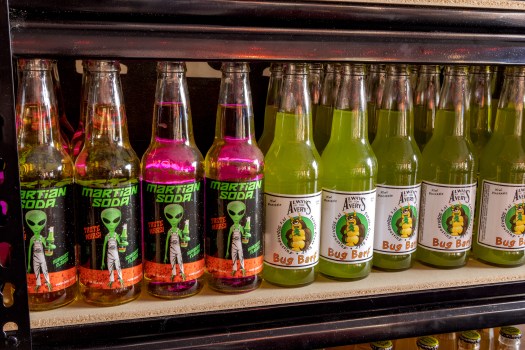 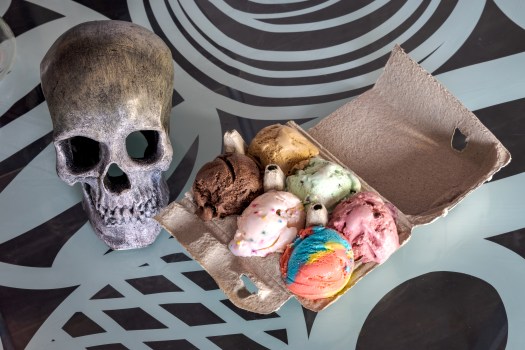 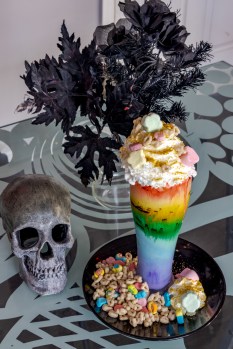 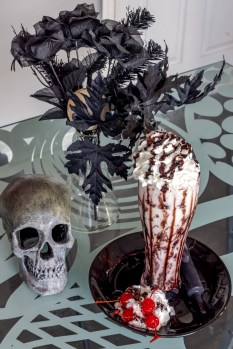 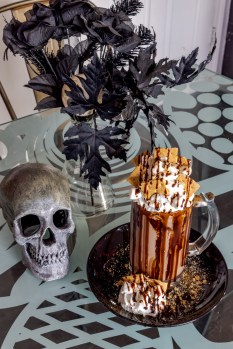 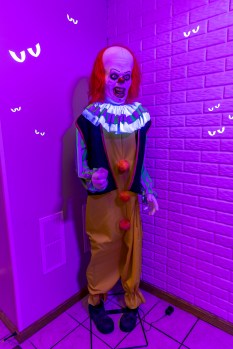 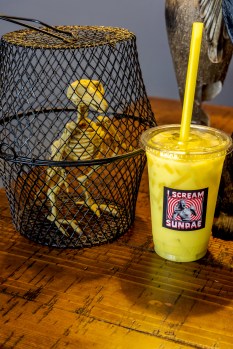 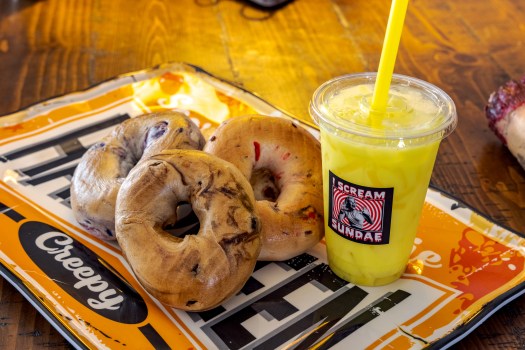 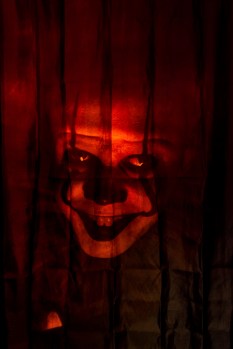 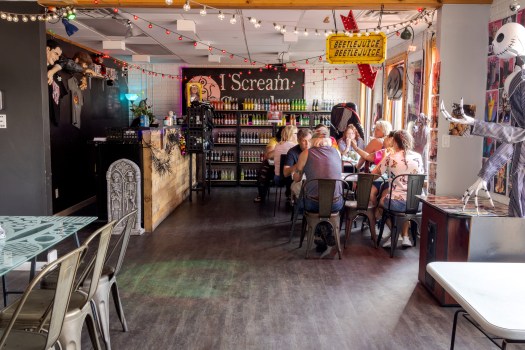 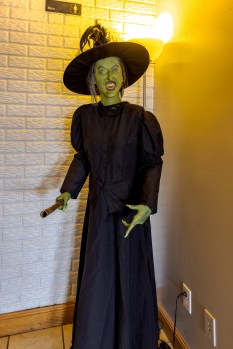 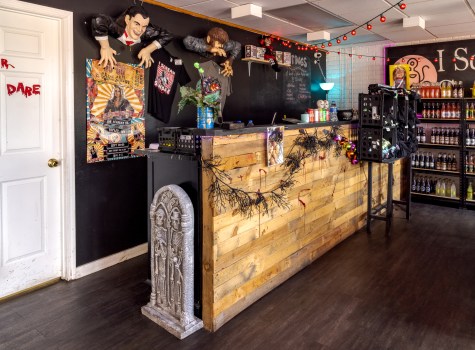 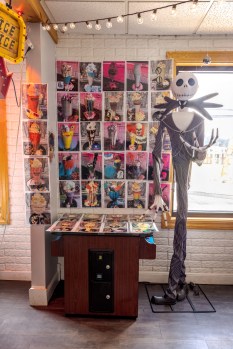 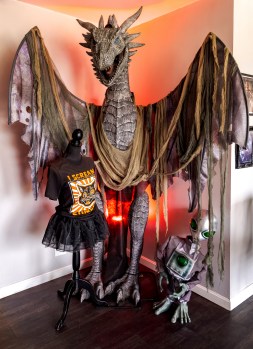 For fans of scary movies and haunted houses, fall is a favorite time of year. But what if there was a place where it’s Halloween all year long? Travel to Ripley, West Virginia, less than 40 miles north of Charleston, and check out I Scream Sundae and Hallowbeans Coffee House.

From Pennywise to the Headless Horseman, Nightmare Before Christmas to Little Shop of Horrors, Creature from the Black Lagoon, Dracula, Wolfman — enthusiasts will be delighted with the creepy cornucopia both inside and out.

A Cross Lanes native, owner Charessa Wilkinson came to the Ripley area 17 years ago. Despite her tattooed appearance and penchant for haunts and oddities, she is a “very strong Christian.”

“People think it’s kind of interesting when they look at me and what I do,” she said. “But God led me to where I am.”

Wilkinson is a former film/communications student with a master’s degree and 15 years of experience in higher education. But after a bout of unemployment, she went in a different, and very unexpected, direction: real estate. Wilkinson is one-half of the successful Sold Sisters Realty (the other is her sister, Amber Mouser, with whom she co-owns Hallowbeans), which shares space in the same building as I Scream Sundae and Hallowbeans.

“I did not want to do real estate because I felt like it was a used car salesmen kind of gig, and I had all this education, and it just felt weird to me,” Wilkinson said. “And obviously, I’m tattooed and, you know, just a little bit different, and I felt like you had to be dressed up to do that kind of job. But I thought, ‘You know what? I’m just gonna change it.’ So, I went out in my Corolla, and my tattoos and my jeans and my T-shirts. And I got a lot of credibility from people.”

“Having a haunted house had always been my dream,” Wilkinson said. And Wilkinson achieved that dream just a few years ago when she and her husband, David Westfall, started The Go Go Scare Show, a seasonal attraction described as a “dark and twisted side show full of screams and panic” in Ripley.

The couple put on the Go Go Scare Show for three seasons, hiring young adults as their temporary employees. At the time, Wilkinson and Westfall had four teenagers between them, and Wilkinson really loved working with the local youth.

“It’s like my ministry,” she said. “I’m a PK — preacher’s kid — and I’ve done missions all over the world, but my heart has always been for teenagers and young adults.”

Unfortunately, the Go Go Scare Show was only open a few weeks a year, and Wilkinson wanted to be able to provide stable employment for this demographic, especially those that had a more “alternative” look and interests similar to hers. And therein was the inspiration for her future businesses.

Now, even though the Go Go Scare Show isn’t continuing, its spirit lives on in I Scream Sundae and Hallowbeans Coffee House.

Using some of the props from the Go Go Scare Show (and later adding more from fans), Wilkinson and Westfall opened I Scream Sundae on July 1, 2018.

“I put the haunt stuff together with ice cream to build a business and create year-round employment for young adults. I wanted to teach them entrepreneurship and business skills, and it just took off. I was not planning on that at all.”

I Scream Sundae has more than 30 over-the-top milkshake creations to choose from currently, with more being added all the time. Pictures of each are hung on the wall for easy selection. These shakes are $9 each and range from the most popular “Night of the Living Dead” (made with Oreo “scream,” or ice cream, chocolate donuts, fudge icing, chocolate sprinkles and “worms”) to the “Serial Killer” (Coco or Fruity Pebbles scream, marshmallow icing and mash and whip cream) to the more recent addition “Gremlins” (red velvet scream, whip cream, red and blue sugar, cotton candy stripe in a bowl of popcorn with 3-D glasses).

There are more shakes that have more obscure references, like a creation based on “They Live” and Rowdy Roddy Piper.

“I respect what kids like and love to watch,” Wilkinson said. “I just added a little touch of ‘magic’ to that with the sparkler.”

As for her inspiration, that comes from a number of sources, including customer requests, but it is often based on what Wilkinson feels would go best with the flavors that she has or a lingering idea that she wants to represent.

“Oftentimes at night, I’m just browsing Amazon looking at different candies and toys that I could use,” she said.

Since Halloween is year-round at I Scream Sundae, there aren’t special flavors for that time of year, but Wilkinson does do some for Christmas and other holidays

“The ‘Christmas Vacation’ creation was a favorite of mine,” she said. “It was eggnog ice cream with a brownie Christmas tree, red icing and white cotton candy on top to look like a Santa hat and green jello and cinnamon toast crunch ‘cat food’ on the side.”

For a simpler shake, customers can order the “B-Movie Creations” for $6. These can be made with any flavor of ice cream as well as banana, peanut butter, black raspberry and blueberry. Other options include single or double scoop “Screams,” “Slashed Throat” floats ($5 — root beer, orange cream, Coke or Dr. Pepper) and “Bloody Sunday” sundaes ($5 for one scoop or $7 for two).

Can’t decide which flavor to order? Try “The Hive,” an ice cream sampler of six scoops served in an egg carton.

In addition to the ice cream, I Scream Sundae has a wall of bottles of flavored “Sick Sodas” and “Frankenweenies” ($2.50) all-beef hot dogs on grilled English buns topped with slaw, chili, mustard, onions, jalapeños and Sriracha ketchup.

“Sometimes we add beer cheese, too, if you want it,” Wilkinson said. “I consider myself a hot dog connoisseur, and I tell people that, so if I was going to do that [serve hot dogs], I was going to do it right.”

Though it has only been open a little over three years, I Scream Sundae has become a destination, with some customers traveling several hours to visit.

“There was a time where a family drove like six hours to get here; I think they were from Delaware. It was a 14-year-old’s birthday wish, so they went and picked up grandma in the nursing home and all drove down together as a family. It was very sweet,” Wilkinson said. “But we’ve met people from all over. Every day we get people that have drove two or three hours to get here. They feel like The Scream is a part of them, and all of our reviews talk about how friendly and welcoming our staff is.”

And for those who might be a little hesitant to bring their youngsters, Wilkinson assures that kids love it.

“There are a lot of little kids that are super horror fans,” she said. “Like, you see these three-year-olds with Pennywise dresses on.” And Wilkinson makes sure their experience is special, focusing on them as customers.

“When families are coming in, sometimes I’m not even acknowledging the parents. I’m talking directly to the kids,” she said. “I think that’s probably a different way to do business, but I also think that the parents appreciate it.”

Above I Scream Sundae is Hallowbeans Coffee House. Wilkinson describes it as “more of a local spot” than The Scream, though it maintains a similar aesthetic — although taking it a bit further in some of the rooms — with clowns, ghostly family photos, menacing masks, “bloody” fabric and heads on stakes.

“I tell people that up here [Hallowbeans] is more of an adult-themed haunted house,” Wilkinson said. “For example, the clowns — I discovered that I can’t have clowns downstairs because some people are really scared of them.”

In terms of a menu, customers can enjoy traditional cafe beverages like drip coffee (using beans from Hill Tree Roastery, a small-batch roaster based in Huntington), espresso shots, lattes, iced brews, hot chocolate and chai tea, along with smoothies and the “Killer Bee,” a milk and honey drink. There are also “Tortured Frozen Brews” like “The Darkness” (a frozen mocha with dark chocolate syrup, whip cream and chocolate shavings),“Ghosted” (a vanilla frozen brew with whip cream and optional cinnamon) and “Creeper” (a caramel frozen brew with whip cream and caramel syrup).

“It was a bit of a learning curve for this area to have a real coffee house with quality coffee because, at the time that we opened [in August 2020], we were the only real coffee shop between Charleston and Parkersburg,” Wilkinson said.

Hallowbeans also has bubble teas — a tea-based milk beverage with tapioca pearls — which Wilkinson said was another new item for the area.

“We introduced that, too,” she said. “I’ve traveled the world a lot, and bubble teas are very popular in Asia — it’s everywhere — and it’s becoming more known here in the United States.”

Pretzels and “Bad Bagels” are available if you’re in need of a snack. The bagels come in rainbow, chocolate chip, French toast, very berry, blueberry, cinnamon raisin and everything flavors and can be ordered with house-made cream cheese.

“The [rainbow] bagels really helped us take off,” Wilkinson said. “Then, we decided to add pretzels because we have nothing else like that in this area, either.”

And just like at I Scream Sundae, Wilkinson sets a high bar for the products at Hallowbeans.

“I want to make sure that everything we do, we do well because I want it all to be top quality,” she said. “Because I think it’s quality that makes you sustainable, not just novelty.”

For Wilkinson, having three businesses has been a wild ride, but then again, she’s always been a bit of a risk taker.

“I come from a long line of entrepreneurs, and I feel strongly that small businesses support other small businesses,” she said. “What’s interesting is that I never knew how to do any of this. I never had a business plan, and I never took out a loan. I just figured it out. From real estate to The Scream. I mean, we had built the Scream, and  I didn’t even know exactly what we were going to do as far as what the creations were going to look like, so I was just learning as I went. And with Hallowbeans, I didn’t know anything about coffee, either. I think you find the right people to teach you and then you just figure it out from there.”

I Scream Sundae and Hallowbeans are located at 516 W Main Street in Ripley, WV. For hours and more information, like @iscreamsundaewv and @hallowbeans on Facebook.