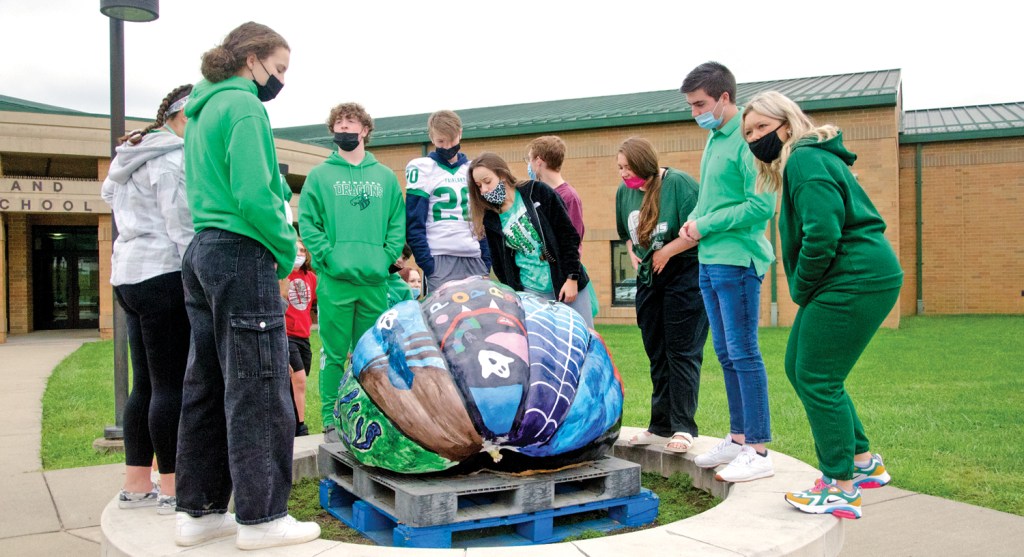 Students in Jerry Bell’s art class at Fairland High School stand with the giant pumpkin they painted after it was put on display in front of the school. (The Ironton Tribune | Heath Harrison) 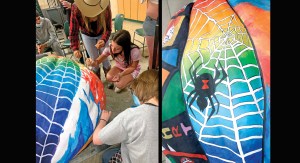 LEFT: Art students at Fairland High School add paint to a section of the giant pumpkin now on display. (Submitted photo) RIGHT: Five different art classes, putting more than 50 hours of work into the project, contributed to the Halloween-themed pumpkin in front of Fairland High School. Each class chose a panel one of five art styles for the project. (The Ironton Tribune | Heath Harrison)

ROME TOWNSHIP — Since Friday, students entering Fairland High School have been greeted by a colossal display for Halloween.

An 847-pound pumpkin, donated to the school’s art department by Fairland school board member Martin Appleton, is positioned near the main entrance.

The pumpkin, grown in Ironton, was the first place winner at the West Virginia Pumpkin festival earlier this month.

“It was grown in the county and it came back to the county,” Appleton, who purchased it at the festival said.

The massive squash was so large, it is still on the pallet from when he purchased it and had to be moved by a forklift.

After it was delivered to Fairland, it became the subject of a project by five of the school’s art classes, all taught by instructor Jerry Bell.

Bell said each of the classes were responsible for a section and, using acrylic paint, decorated their portion in one of five styles — expressionism, abstract expressionism, pop art, Bauhaus and non figurative.

Bell said a ghost on the piece is part of the abstract expressionism section, while the pop art portion features the lips from the Rocky Horror Picture Show film.

Other features are a reproduction of Edvard Much’s painting, “The Scream,” with the face of its subject replaced with the mask of Ghostface from Wes Craven’s “Scream” films.

He said, before the acrylic was applied, a white primer was put on the pumpkin as a base. Then the classes worked simultaneously on it.

Altogether, 120 students worked on the project for more than 50 hours of class time.

“I think it’s fantastic,” Appleton said, upon seeing the finished project. “And I’m glad they used a Halloween theme.”
He said the pumpkin was dropped off 10 days earlier.

Bell said this is the first time the school has done something like this, and it is his first year as a teacher there.

He said he pleased with how the project went and he hopes to have art classes do another next year and start a tradition.