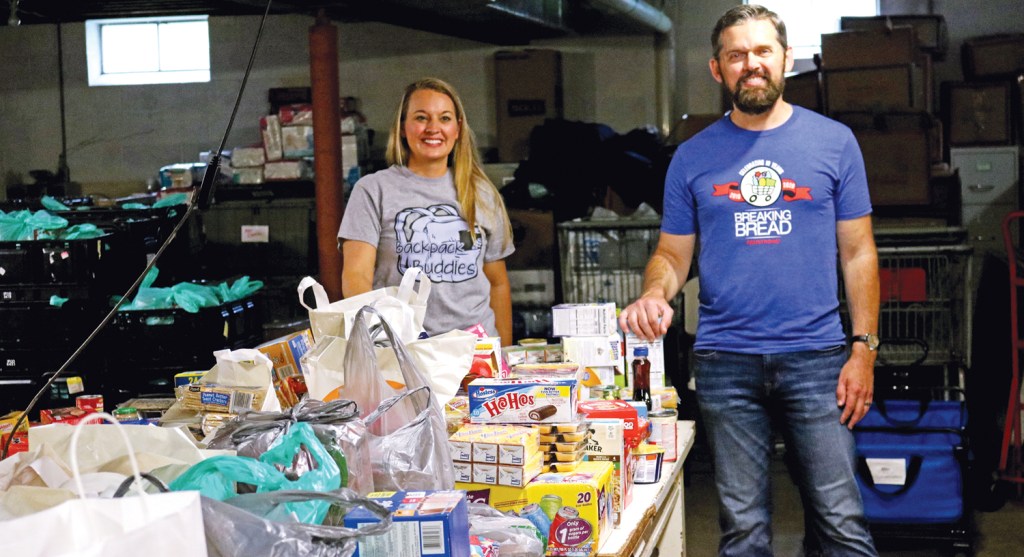 Jodie Hunt, program director of Backpack Buddies, left, and Shane Finster, community marketing manager with Armstrong, right, stand with some of the over 5,000 food items collected during the fourth annual “Avenge Hunger Month.” The food will go towards feeding more than 300 children in Lawrence County. (Submitted photo)

SOUTH POINT — Fighting hunger is a never-ending battle, but Armstrong did well in their effort during its fourth annual “Avenge Hunger Month” to provide much needed resources to over 200 community feeding programs.

Through the support of 17 area businesses, collection bins were placed and a total of 5,589 food items were collected and $242 was raised.

“We appreciate the generosity of our customers, employees and community members who donate, so that we can continue to support the important work being done through Backpack Buddies,” said Shane Finster, community marketing manager with Armstrong. “These donations help our local, Lawrence County children, by providing for those with limited to no access to food over the weekends.”

Backpack Buddies started in October 2012 with the Rock Hill school district and has grown to serve 15 schools in Lawrence County, delivering more than 300 backpacks to children who otherwise might not have access to food over the weekend.

Over the past four years of the drive, Armstrong has collected more than 120,000 pounds of food and nearly $60,000 in monetary donations to share with community feeding programs.

Since 2010, Armstrong’s Breaking Bread has approached food insecurity and hunger with a four-pronged approach: Providing food, money, time and awareness.

As a year-round initiative, non-perishable food or monetary donations are accepted at Armstrong’s South Point office at any time during regular business hours.

These donations are distributed to a variety of non-profit food pantries across Lawrence County.

Nationally, from late August through early October, Armstrong customers, employees, and community associates donated 22,321 pounds of food and $15,219 in monetary donations, as well as raising additional awareness via email, social media, and television commercials. The much-needed resources will go to over 200 community feeding programs.