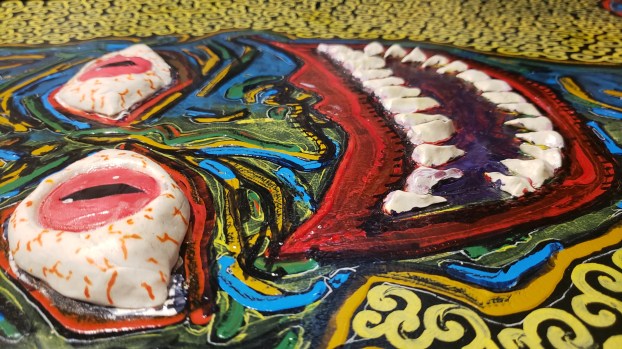 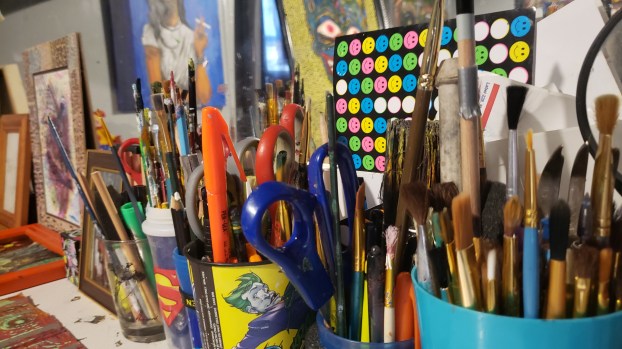 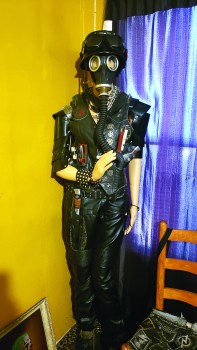 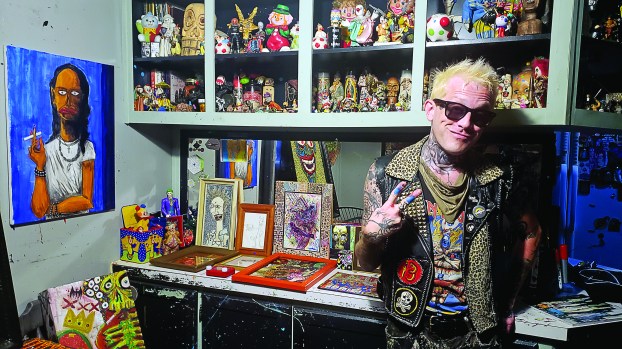 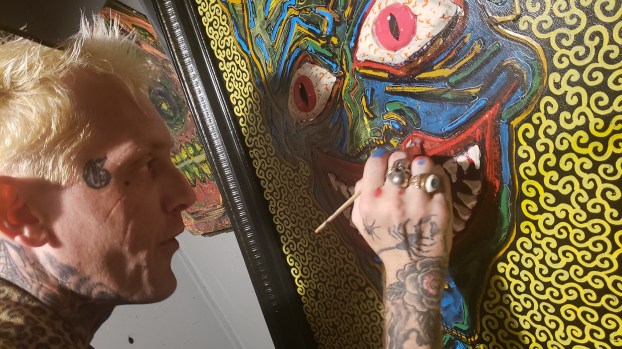 “Artistically speaking, I like to spread myself as thin as possible,” says mixed-media artist and Ashland, Kentucky native Shannon Lee. “And I work on something every day and every night.”

Lee’s obsession with making all kinds of art is evident as soon as one enters his home studio. Elaborate, abstract collages hang on nearly every wall. Miniature wood carvings of creepy creatures sit on a shelf full of transformed toy figurines. Original paintings both large and small await finishing touches. One painting, a large cartoon-ish portrait of a bug-eyed devil with a menacing grin, is about to be packed and shipped to a buyer in New Jersey. The space teems with a palpable, twisted creative energy.

Though he’s been painting and drawing since childhood, Lee admittedly got more serious about making art in 2017 after years of relentless touring all over the country as the frontman of the now-defunct local punk band The Transmissions. Leaving the band was not the only significant change for Lee that year.

“Literally the day after I quit music, I picked up a paintbrush. I quit the band, got a house and found out I was going to become a dad. So the idea was I would paint as much as I possibly could and create this giant inventory that would never run out.”

After constantly creating for the last four years, Lee’s work can now be found on six different continents. Locally, the artist has had several showings in venues like the Grayson Gallery and Arts Center and Midnight Society Tattoos. Despite the Tri-State’s small fringe art scene, Lee has carved out a significant spot for his work on the local level, and he sees the scene growing in positive ways.

“I’ve placed paintings all over the area. A lot of people have my art in their homes and in their businesses. And it’s always a good response if I show. There’s a lot of talent in this area. That goes for music, art, performances of all kinds. The people who are doing their thing are doing a phenomenal job of promoting the arts. There are still some weird downtown loopholes, but I’ve been a part of the scene around here forever and it has gotten better. Diversity here is growing everyday, and that’s a beautiful thing to see.”

Though much of Lee’s visual aesthetic is chaotic and abrasive, there is an unmistakable uniqueness to the artist’s style and approach. The spirit of punk rock lives in Lee’s creations, each one of them oozing with an accessible yet anarchic feel that transcends the typical boundaries of fringe cultures. More playfully irreverent than deliberately deviant, Lee melds subversive imagery of pop and religious icons with comic book-style characters and abstract surrealism to create an arresting visual universe.

“I’ve always loved to draw and I’m pretty observant. I’m completely untrained and I don’t really draw and paint like I used to. Now, a lot of times, things get pretty messy and not super detailed. But I learned to draw from Mad Magazine and Spiderman comics. A lot of cartoon characters. Basically, anything I could read and get my hands on. Mad was particularly great. All the characters were often mutated. That really stuck with me.”

Lee’s lifetime of creativity goes far beyond painting and fronting punk bands. An accomplished fashion designer, Lee also makes and sells hand-sewn leatherwork, studwork and spikework to fans and followers all around the world. He even dabbles in wood carving, sculpting and making furniture. And in true punk rock fashion, much of his work begins with the repurposing of old and discarded materials like frames, old thrift shop canvases, and National Geographic magazines. Of course, networking and a little luck help too.

“A friend of mine recently wanted to buy one of my clown paintings for her boyfriend for his birthday, because he loves clowns. So she bought a painting. I delivered it to her in the park during the Pride Festival and we got to talking and she said, ‘My neighbor has an old broken pinball machine that you might like on his front porch.’ BOOM! I went and picked it up the next day. And now I’m turning this vintage, circus-themed pinball machine from 1981 into a beautiful coffee table. The bottom part will be a table and the backboard will be a lightboard for the wall.”

With multiple projects across several different mediums in progress simultaneously, it is safe to say Lee’s artistic output won’t be slowing down anytime soon. But if his home studio is any indication, he wouldn’t have it any other way.

“I don’t sleep much,” Lee says with a laugh. “I’m a night owl, I like to be alone and my son sleeps like a log. So that gives me a lot of time to work on my art.”

To view and purchase Lee’s work in person, head to the Final Friday event on Friday, Oct. 29 at the Grayson Gallery in Grayson, Kentucky and in Ashland at the Midnight Society’s annual Blood Moon Ball on Saturday, Oct. 31 at the Social Room (5405 Roberts Drive). To view and purchase his work online, follow him on Facebook and Instagram @snakehips138.