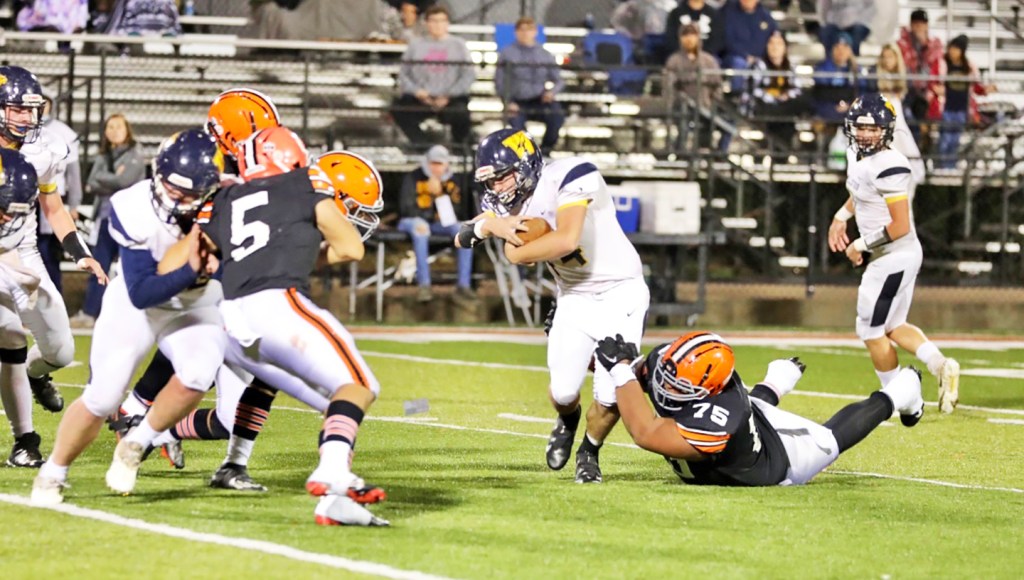 BELOW: Ironton Fighting Tigers’ freshman quarterback Braden Schreck threw 3 touchdown passes in a 49-6 rout of the Wellston Golden Rockets in the first round of the Division 5 playoffs on Saturday; ABOVE: Ironton defensive lineman C.J. McCall (75) brings down a Wellston running back. (Photos By Tim Gearhart) 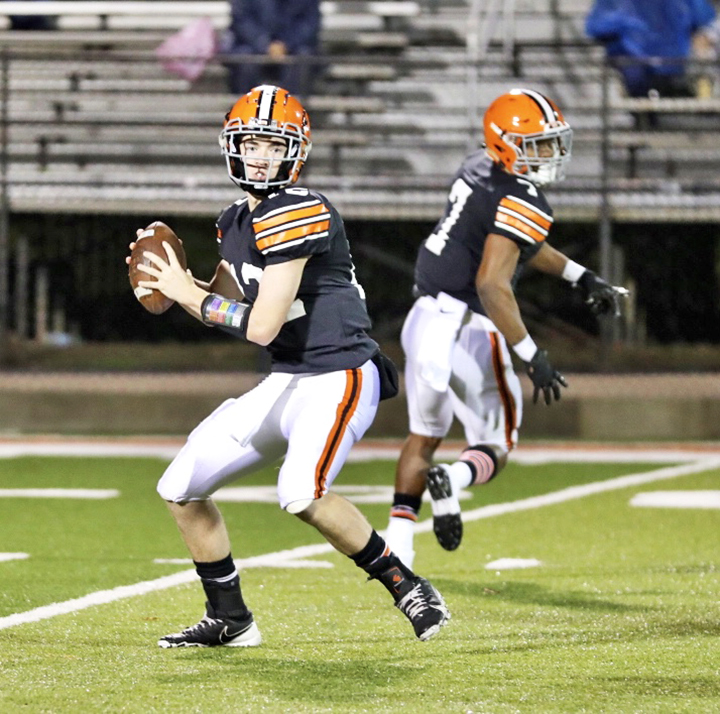 Braden Schreck was such a large baby at birth that his father Tobey called him “Biggie.”

Now, the nickname has stuck and the Ironton freshman quarterback lived up to that name as he came up big in his first varsity start as the Fighting Tigers routed the Wellston Golden Rockets 49-6 in the opening round of the Division 5 playoffs on Friday at Tanks Memorial Stadium.

Starting quarterback Tayden Carpenter suffered a broken ankle on the fifth play of the game last week and backup Jon Wylie has a shoulder injury.

That threw Schreck onto the big stage and he performed up to Tony Award form as he completed 8-of-12 passes for 162 yards and three touchdowns.

“It was a big moment and (Schreck) gets his first start and handles himself well,” said Ironton coach Trevon Pendleton. “He’s very mature and that’s a plus for him. He runs our jayvee team and he takes a lot of reps in practice.”

Ironton will now host Portsmouth next Saturday in the second round of the playoffs.

Scheck’s numbers were all in the first half as the backups played the second half. But Schreck wasn’t a one-man show by any means.

The running game finished with 233 yards including 161 in the first half as the offense exhibited balance. Pendleton said the running game helped set up the passing game.

“Obviously, it was them loading the box (to stop the run) and they ran cover zero and us handling that,” said Pendleton.

Jaquez Keyes had 86 yards on just 8 carries and a touchdown while Landen Wilson ran only three times for 64 yards and two TDs.

The defense came up big as well.

Ironton (10-1) held the Golden Rockets to minus 29 yards on 21 carries. Quarterback Isaac Molihan was 8-of-17 passing for just 71 yards and was intercepted twice, both by C.J. Martin who returned one for a 22-yard Pick-6.

Ironton recovered a fumbled kickoff to start the game at the 47-yard line. Three runs by Keyes got the ball to the 25 and after a one-yard loss, Wilson weaved his way through the Wellston defense 26 yards and a 6-0 lead.

Matt Sheridan then kicked the first of seven extra points and it was 7-0 with just under two minutes gone in the game.

Wellston managed a first down on a 21-yard pass to Garrett Brown, but two passes later Martin came up with his first interception and the Fighting Tigers had the ball at their own 37.

Schrck hit Aiden Young for 12 and Ty Perkins for 16 to start the drive. Keyes had a 14-yard run and then Schreck and Aaron Masters teamed up on a 16-yard catch-and-run pass for a touchdown and a 14-0 lead with 5:13 left in the quarter.

Ironton’s offense exploded in the second quarter for 28 points with Martin adding his Pick-6.

Amar Howard had a 9-yard run, Keyes carried for 25 and 11 and Schreck threw to Perkins for a 14-yard scoring strike and it was 21-0 just 26 seconds into the second quarter.

Schreck lofted a nice pass to Angelo Washington for 35 yards, Wilson ran 28 yards to a 2-yard line where he finished off the drive on the next play and it was 28-0.

On the first play after the kickoff, Martin came up with his interception and it was quickly 35-0.

Following a Wellston punt, Schreck hit Young for 31 yards and then he ran 7 more yards to set up a 5-yard scoring run by Keyes and it was 42-0 with 2:26 left in the half.

Wellston (5-6) avoided the shutout when Isaac Molihan hit Evan Brown with a 24-yard scoring pass with 3:51 to play.