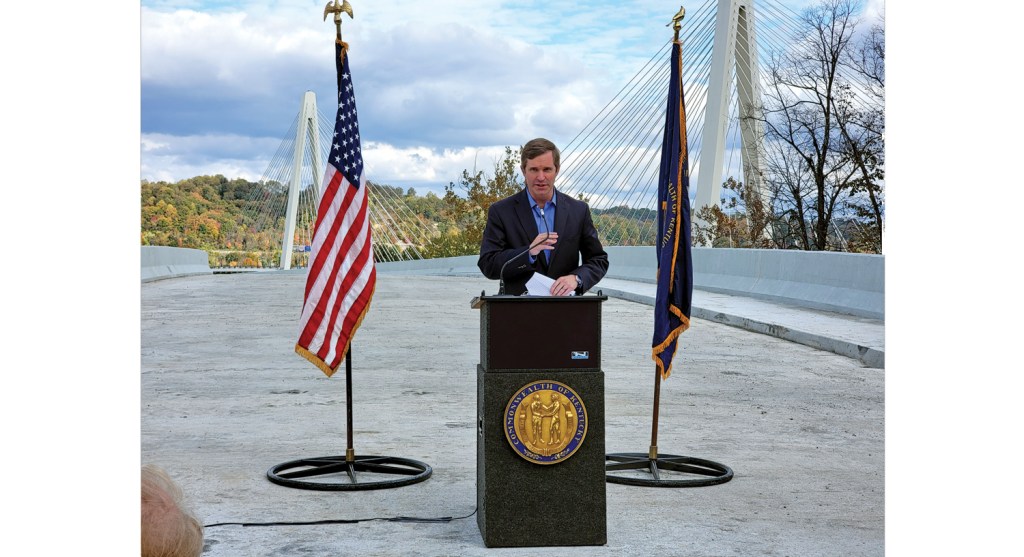 Kentucky Gov. Andy Beshear announed the opening of the new Russell, Kentucky viaduct bridge on Tuesday. The bridge will be opened to traffic on Nov. 15. (The Ironton Tribune|Mark Shaffer) 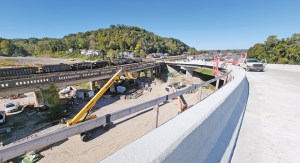 A view from the top of the new viaduct bridge in Russell, Kentucky. The bridge is expected to be open on Nov. 15. (The Ironton Tribune|Mark Shaffer)

Expected to be open to traffic on Nov. 15

He was joined by many county and local officials including Greenup County judge executive Bobby Carpenter, who was happy that the viaduct bridge was nearly complete.

“It is going to help us with some development in the rest of this county,” he said, adding that the viaduct bridge and the Oakley C. Collins bridge are two project that have been worked on for years. “This bridge was also stand for years.”

It was fitting that Beshear was there to open the viaduct bridge since it was his father, then-Gov. Steve Beshear, who broke ground on the project in 2012.
Beshear said the bridge would be open on Nov. 15.

“So, it is coming and it is coming fast,” Beshear said, adding that along with the Oakley C. Collins bridge, the two projects represent a multi-million-dollar investment in transportation and economic development by Kentucky and Ohio.

Beshear called the interstate-style “flyover” design of the viaduct bridge will be a gateway for Russell, Kentucky and moves access to the city away from the congestion of U.S. 23/Oakley C. Collins bridge intersection and improving traffic flow for the 18,000 vehicles that go through there every day.

The “flyover” design of the new viaduct bridge chosen to keep the old bridge open since it is one of only four ways to get into Russell, Kentucky and the viaduct bridge is the simplest.

Kentucky Transportation Cabinet District 9 spokesperson Allen Blair said the current 82-year-old viaduct bridge needed to be replace because while it was still structurally sound, it was nearing the end of its functional life.

About a decade ago, the Kentucky Transportation Cabinet began looking at replacing the viaduct and realized quickly that there was a big construction issue for the project.

“If it had been a bridge over a creek, we would have just built a new bridge next to the existing one and then torn down the old bridge, that’s the simplest.” Blair said.

“But, here, that would be impossible because of the new Ironton-Russell Bridge, U.S. 23 and the train tracks. One of the biggest issues we have is that the Russell viaduct bridge is the only access for large vehicles. We looked at several options and had public meetings and this concept of a flyover to come into relatively the same place as the Russell viaduct bridge was liked by everyone.”

With the new viaduct bridge accessing U.S. 23 at Kentucky 775, that will leave the intersection from the Oakley C. Collins Bridge a single T-shaped intersection, which should cut down on the amount of time, or phases, it takes to get out of the intersection.

“We will cut the number of phases down on the signal and the timing will be less,” Blair said. “So more traffic can move faster at the intersection. It will all change once this bridge disappears.”

He added that the changes won’t be put into effect immediately after the new viaduct bridge is opened because they will still need some of the space around the old viaduct bridge for demolishing it.

“It won’t happen right away, but it will happen soon after the new bridge is opened,” Blair said.