Third time is a charm 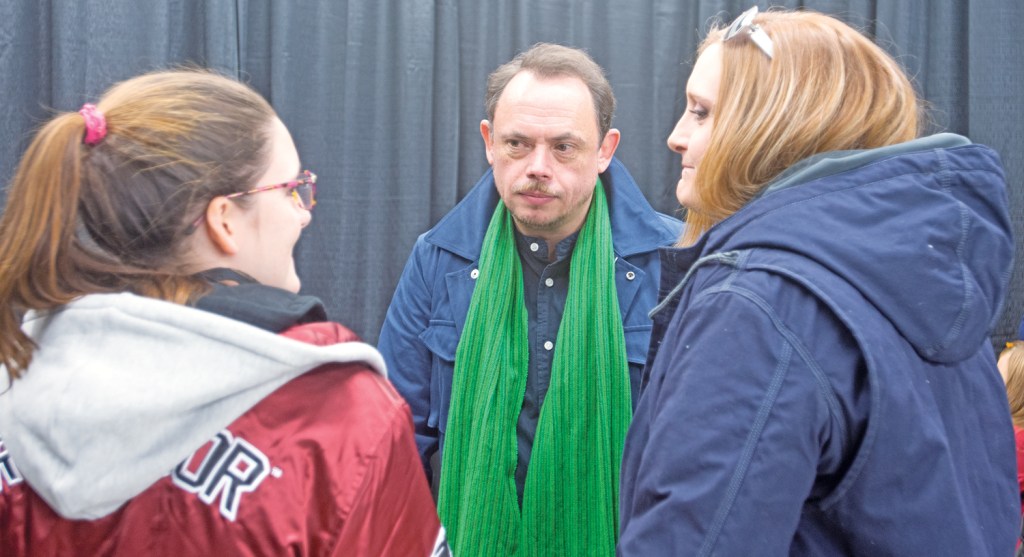 James Payton, who played Neville Longbottom’s father, Frank, in “Harry Potter and the Order of the Phoenix,” listens as fans asks him a question during the 2019 Wizardfest in Ironton. (The Ironton Tribune | Mark Shaffer)

Ironton Wizardfest will return to the city’s downtown street next weekend and transform it again into a magical place with strange beasts, costumed wizards, training in wand use and even a couple of actors who have appeared in the Harry Potter-related films.

“I, for one, am excited that we are back,” said Brad Bear, one of the organizers of the event. “It has been a challenge knocking the dust off. That two-year gap is a bit of hurdle to overcome. But we are back and ready for everyone to have fun with people who enjoy Harry Potter.”

Wizardfest wasn’t held last year because of state restrictions on gatherings of large crowds and the fan festival attracts around 3,000 people each event.

But the year off just gave the organizers more time to get things set up and make sure that the event is safe as possible.

He said ticket sales are better than they were for 2019.

“So the fans are ready to get back out there and mix and mingle and see each other again,” Bear said. “And I think we all need that hope and good time and escape into our fandom.”

Three actors have confirmed their appearance at Wizardfest.

Making his first appearance is Jim Tavare who played Tom, the innkeeper of The Leaky Cauldron in “Harry Potter and The Prisoner of Azkaban.” He has had a long career as a comedian, well known for appearing in formal wear and playing an upright bass. He was the first overseas actor to appear on NBC’s “Last Comic Standing,” has worked with Ricky Gervais on “‘The Jim Tavaré Show” and is a favorite comedian of England’s Prince Charles.

Making a return trip to Ironton is actor James Payton, who played Neville Longbottom’s father, Frank, in Harry Potter and the Order of the Phoenix, and was the stand in/cast reader for other actors in Fantastic Beasts and Where to Find them. He has appeared in 52 movie and TV shows including the USO actor playing Adolf Hitler in “Captain America: The First Avenger.”

Also returning for a second time is Walles Hamonde, who portrays an Auror in Fantastic Beasts and Where to Find Them.

Payton and Walles will also be doing their popular “Order of the Improv” performance wherein they will mash Harry Potter and other genres together.

“There is audience interaction and they bring people up onstage,” Bear said. “Jim will be doing a question and answer session.”

There was a bit of a concern about getting actors to Ironton because of COVID-19 as there is a ban on travel between the UK and America. But that is set to expire on Monday.

The organizers had already bought airline tickets because the White House had said that the travel ban would end in early November.

“But they didn’t give a date,” Bear said. “Just last week they gave a date and it is Nov. 8 and the actors are set to fly over on Nov. 11, so they are going to be some of the first UK residents into the U.S. in almost two years.”

Tavare is based in the Los Angeles and will be flying in before the weekend.

As is common at fan festivals, the actors will be signing autographs and will be available for photos, but that is an additional charge of $15 each.

Q&A and the improv performance will be open to the public.

Among the new things at the event is Terra Fate Exotics, which has exotic plants.

Ironton in Bloom will be having crafts in the greenhouse as well.

The BARKer Farm will be returning with its menagerie of animals, including Daniel the camel.

Dr. Des Coveries will be bringing his snakes, insects and spiders as well.

With concerns about COVID-19 still lingering, the organizers are making an effort to prevent large groups of people gathering for long periods of time indoors.

“We’ve made a lot of adjustments that will help people with distancing,” Bear said. In 2018, there were a lot of activities inside the City Center. Several activities are being moved outside into a giant event tent.

The popular ButterBrew drink stands have been moved outside, making it more accessible and preventing lines from building up inside. One will be outside the Wizard’s Pub under the marquee of the Ro-Na theater and a second one will be in the parking lot next to the Ro-Na in the giant food court. ButterBrew is a gourmet butterscotch soda.

Kids crafts and wand making have also been moved outside to give people more space to create.

And those moves give the Ohio, Kentucky, Indiana LEGO Users Group more space for a more impressive Harry Potter display inside the City Center.

“They are expanding their Harry Potter Legos this year,” Bear said. “It was epic before, now it will be more so. And they will be bringing in more builders too.”

House sorting and cosplay will also remain in the building.

Masks will still be required inside buildings per health department and CDC recommendations.

“So, we are doing all we can for social distancing, but at the end of the day, it is a festival,” Bear said. “If you still feel unsafe, we will be back next year.”