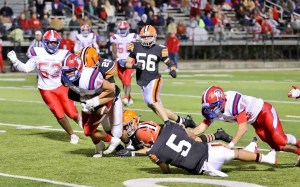 The Ironton Fighting Tigers’ offense was out of rhythm and out of the end zone more than usual.

Fortunately, they defense was there to make sure the Portsmouth Trojans’ offense performed the same way.

While Ironton’s mistakes kept the offense out of rhythm for most of the game, the defense held Portsmouth (8-4) to a net minus-2 yards on the ground and quarterbacks Drew Roe and Tyler Duncan combined to complete 17-of-31 passes for 156 yards and two interceptions.

Roe — who had thrown for more than 2,000 yards this season — came into the game with a bad knee and re-injured it late in the first half running to his right and avoiding the rush. He was 5-of-10 for 40 yards and an interception.

Duncan came on and threw an incompletion at the Ironton 22 with less than a minute to play in the half. He finished 12-of-21 for 116 yards with a touchdown and an interception.

Ironton coach Trevon Pendleton said his team was not at its best but fought through it to get the playoff win and beat the Trojans for the second time this season.

Ironton won 36-9 just two weeks ago in the season finale.

“They done a lot of good. These guys battled through adversity. Things didn’t go well for them and they just kept fighting,” said Pendleton.

“But that’s a credit for Portsmouth. Portsmouth is a good football team and well-coached. They’re not going to beat themselves.”

Ironton tried to help Portsmouth. The Fighting Tigers fumbled four times and lost one while being whistled for penalties eight times totaling 60 yards.

Pendleton praised his team for fighting through all the adversity.

“That’s one thing I’ll say for this group, when they have their backs to the wall they come out fighting,” Pendleton said.

Ironton (11-1) will now play Wheelersburg at 7 p.m. next Saturday at  Portsmouth.

The teams exchange punts and then Ironton scored although they began the drive with a huge loss on the second play.

First, Ironton blocked a punt and got the ball at the Portsmouth 23. A dropped ball on the exchange was kicked backwards and Ironton recovered only to have an 18-yard loss.

Quarterback Braden Schreck then hit Aiden Young for 10 yards and then found Ty Perkins around the 10-yard line and he turned, made a nice move and ran into the end zone for the touchdown from 28 yards out.

Portsmouth managed to get to the Ironton 37 only to have Amar Howard pick off a Roe pass at the 31.

Ironton drove to the Portsmouth 27-yard line 10 plays and then Schreck hit Aaron Masters for 16 yards and a first down at the 11.

But Ironton was called for holding on the next play to push them back to the 20. The drive stalled at the 8-yard line and Pendleton called on Sheridan who kicked a 25-yard field goal at a 10-0 lead with 8:35 left in the half

Portsmouth threatened at the end of the half as the Trojans reached the 23. After Roe went out hurt, the Trojans attempted a 39-yard field goal with 44 seconds left only to have Ironton block the kick.

Portsmouth had just 9 yards rushing, 40 passing and two first downs in the first half.

Neither team scored in the third quarter, but an Ironton fumble at the Portsmouth 46 was recovered by Beau Hammond to set up Portsmouth only scoring drive.

The Trojans went 56 yards in just six plays thanks to a 15-yard pass from Duncan to Dariyonne Bryant on the first play that got the ball to the Ironton 31.

Two plays into the fourth quarter on a third-and-6, Duncan threw across the field to the left corner of the end zone and Devon Lattimore outjumped the defensive back for the ball and made the catch for a 16-yard touchdown pass.

The conversion kick was block and Ironton led 10-6.

The Fighting Tigers drove to the Portsmouth 35 but Masters was stopped for 2 yards on a fourth-and-5 play.

But two plays later, Angelo Washington picked off a Duncan pass and Ironton was back in business at the Trojans’ 39.

Keyes ran 8 times in the 9-play drive — Schreck scrambled for 7 yards when attempting to pass — and he ran the final 2 yards for the clinching touchdown with 2:59 to play.

Portsmouth got the ball at its own 14 and Duncan was 5-of-10 passing to get the ball to the Ironton 36 before the drive stalled.

Schreck finished 10-of-17 passing for 113 yards and a touchdown. Wilson ran 10 times for 51 yards, Perkins caught two passes for 37 yards and a score while Aiden Young had three grabs for 31 yards and Wilson three receptions for 27 yards.