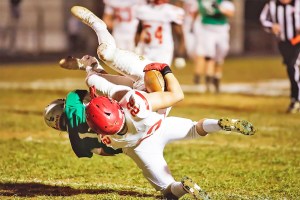 PROCTORVILLE — Let’s air it out.

Both Fairland Dragons’ quarterback Peyton Jackson and Worthington Christian Warriors’ Hobie Raikes were in a passing battle on Saturday in the Division 6 Region 23 quarterfinals.

Jackson didn’t have as many yards but he had the better performance as he sparked the Dragons to a 58-28 romp over the Warriors.

Zander Schmidt had 5 receptions for 122yards and 2 touchdowns.

Raikes was 21-of-31 for 348 yards and 2 scores, but he was intercepted 4 times including one that was returned for a touchdown.

The Warriors (8-3) finished with a net rushing of minus 6 yards.

The win means Fairland will face West Jefferson in the regional semifinals at 7 p.m. on Saturday at Chillicothe. The winner will advance to the regional finals.

The game was a see-saw affair in the first quarter as each team scored two touchdowns.

Jackson hit Steeler Leep with a 45-yard scoring pass and Alex Bruce kicked the first of 8 conversions and it was 7-0.

Fairland came right back to take a 14-7 lead as Jackson and Schmidt teamed up on a 39-yard scoring pass.

Raikes went deep as he hit Correll Amsbaugh with a 55-yard TD pass and the game was even again.

But he who lives by the pass, dies by the pass as Schmidt picked off a Raikes’ pass deep in Warriors’ territory and returned it 12 yards for a touchdown and the Dragons took the lead for good at 21-14.

Jackson and Schmidt clicked on a 65-yard touchdown pass and the lead was 28-14 before the half.

Each team scored in the third quarter as Brycen Hunt caught a 45-yard scoring pass from Jackson and it was 35-14.

The Warriors came back with an 11-yard TD pass from Raikes to Ethan Albert to cut the deficit to 35-21.

But then came a key sequence as the Dragons tackled Raikes in the end zone for a safety to make it 37-21 and on the ensuing free kick Hunt ran 40 yards for a touchdown and it was 44-21.

The Warriors closed out the scoring on a 5-yard TD run by Tyler White.