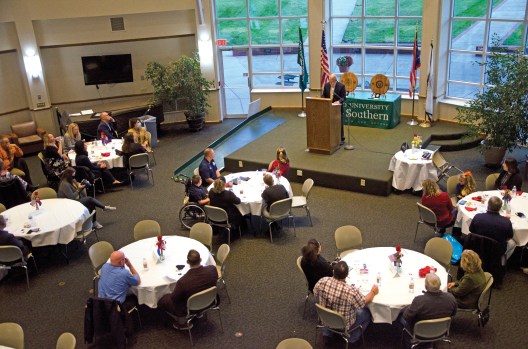 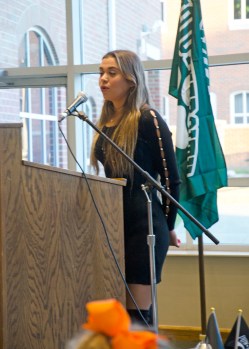 Demi Sands sings the national anthem at the Lawrence County Veteran of the Year ceremony at Ohio University Southern on Wednesday. (The Ironton Tribune | Heath Harrison) 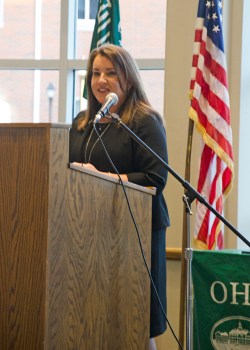 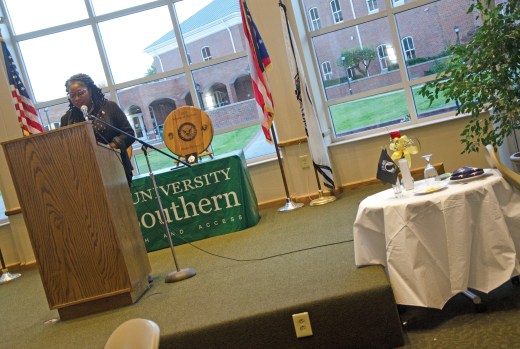 Dr. Teresa McKenzie, USAF veteran, reads the Missing Man poem, next to an empty table set to specifications, at the Lawrence County Veteran of the Year ceremony at Ohio University Southern on Wednesday. (The Ironton Tribune | Heath Harrison) 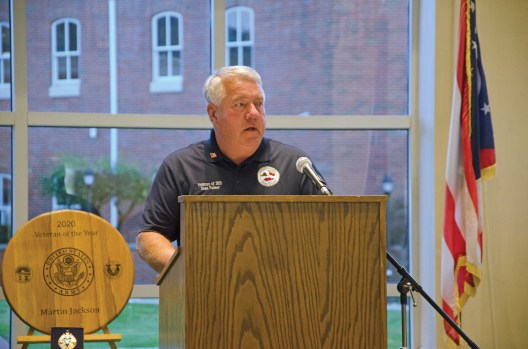 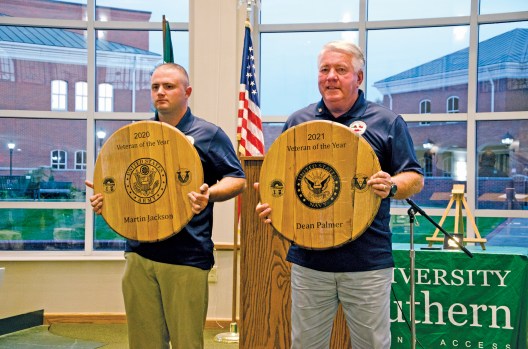 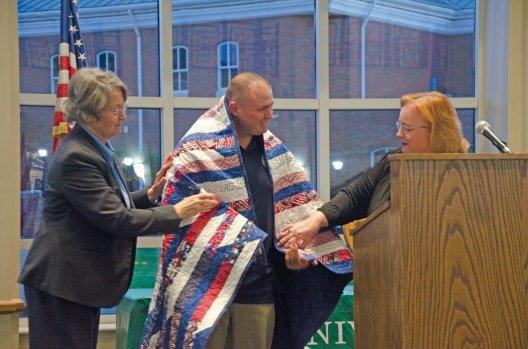 Members of Material Hugs Quilting, Group # 78489 present Martin Jackson, the 2020 Veteran of the Year, with a Quilt of Valor at the Lawrence County Veteran of the Year ceremony at Ohio University Southern on Wednesday. (The Ironton Tribune | Heath Harrison) 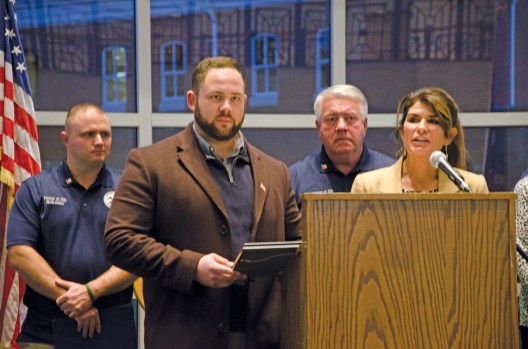 Two veterans from Lawrence County were honored on Wednesday, not just for their service to their country, but also their contributions to their community in following years.

The Lawrence County Veteran of the Year Ceremony took place at Ohio University Southern. The award, now it in third year, had a double induction, as last year’s event was canceled due to the COVID-19 pandemic.

Named as 2020 Veteran of the year was Martin Jackson, while Dean Palmer was awarded the honor for 2021.

“We want you to feel welcome and uplifted as this event commends your service and bravery,” she said.

Pennington said it is important to remember of veterans that “Service does not come without sacrifice.”

“And we are grateful to them,” she said.

He said that those chosen are servant leaders, meaning they “serve first, but a conscience choice aspires them to lead.”

“The veterans this evening clearly embody what a servant leader is and display those qualities,” he said.

He introduced Jackson as having a “multitude of impressive accomplishments as a respected citizen of Lawrence County.”

He graduated from Collins Career Technical Center with a certification in massage therapy and used his skills in the community, visiting nursing homes and providing free massages for residents. In 2016, he joined the American Red Cross.

Jackson founded a non-profit group to help children with mobility-related issues. He and a team conducted research to build Ironton’s first and only all-inclusive playground through the organization.

He has continued to serve his community and fellow veterans. In 2018, he graduated from Huntington Junior College with an associate’s degree in business management and opened his first business, The Party Place, which became instrumental as part of his plan to help crate a space for veterans to meet. He has started a “Veterans Meet and Greet” at the venue for veterans, Gold Star families and military supporters, providing a free dinner, live entertainment a positive atmosphere and guest speakers.

He has also partnered with Pathways, Inc. in Ashland, Kentucky to help connect veterans to free mental health services provided there.

He founded his second veteran-focused organization, Veterans 4 Veterans, which provides food and supply drives for the Huntington Homeless Vet Center and highlights services there, such as free lawn care for disabled veterans and marches to bring awareness to suicide rates among veterans.

“I firmly believe, as vets, that we should stick together,” Jackson said upon receiving the award. “The smallest gesture makes the greatest difference.”

In introducing Palmer, Carpenter said he “still continue to provide selfless acts of service, and, obviously, personifies this in everything he does.”

Palmer has served Lawrence County his entire life. As a teen, he began as a volunteer firefighter and, after graduation from high school, joined the U.S. Navy, serving as an aviation structural mechanic third class.

In 1976 and 1978, he was named Sailor of the Month and later transitioned to the Naval Reserves.

Palmer served in the Coal Grove Police Department and later the Lawrence County Sheriff’s Office upon separation from active duty. In his spare time, he volunteered as a troop leader for Boy Scout Troop #103.

Using the skills he learned in the Navy, he volunteered and joined the Lawrence County Marine patrol and Dive Rescue Team, helping with 19 underwater recoveries.

In 1991, he decided to help his fellow peace officers with the sheriff’s office and local police departments and built a firing range on his property, where he worked to train others and maintain their firearms qualifications at no cost. He continues to offer those services free to officers in the area.

In 2015, he started volunteering at Hope’s Place Child Advocacy Center in Ashland, where he teaches victims of domestic violence and other women and children in the community self protection to increase their self esteem. He also instructs on other survival techniques, such as how to get out of trunks or escape tape restraints and offers positive feedback and encouragement to those he works with.

Music for the ceremony was provided by Demi Sands, who sang the national anthem and a closing song, while Dr. Teresa McKenzie, a U.S. Air Force veteran, read the Missing Man poem.

The Lawrence County Veteran of the Year award was created in 2018, with nominations coming from the community. The recipient for 2019 was Mathew Jenkins.