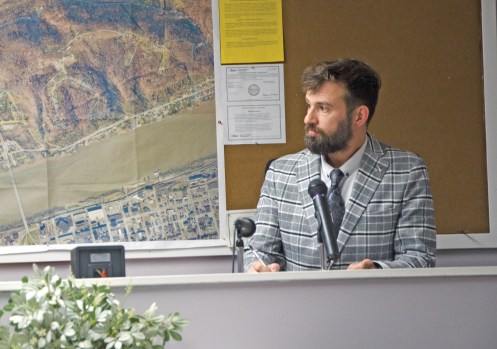 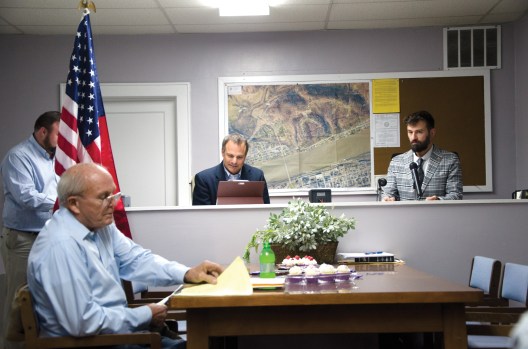 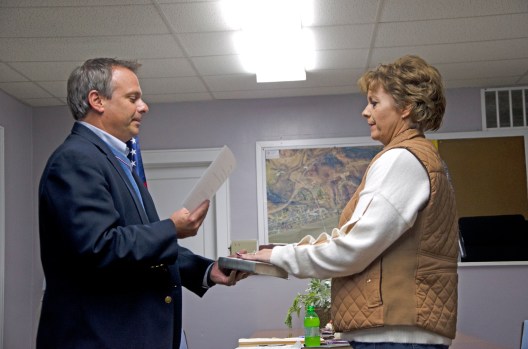 Lisa Blake is sworn in as a new member of the Chesapeake village council on Friday by village solicitor Derick Fisher. (The Ironton Tribune | Heath Harrison) 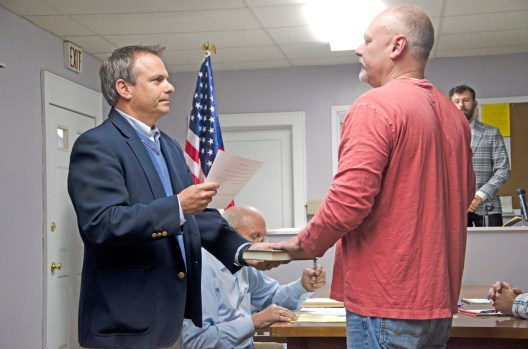 Marvin Henson is sworn in as a new member of the Chesapeake village council on Friday by village solicitor Derick Fisher. (The Ironton Tribune | Heath Harrison) 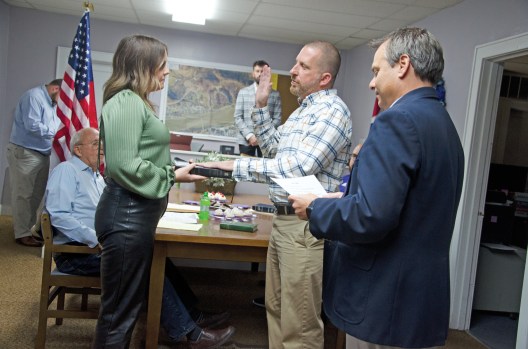 Drew Griffin is sworn in as a new member of the Chesapeake village council on Friday by village solicitor Derick Fisher. (The Ironton Tribune | Heath Harrison) 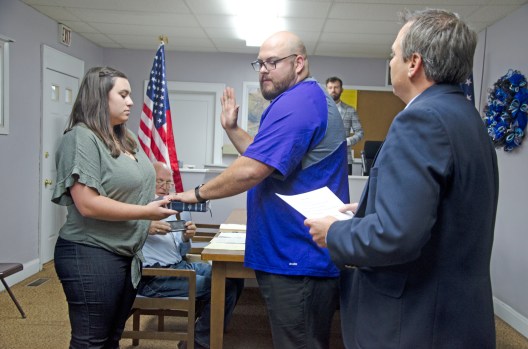 Jacob Wells is sworn in as a new member of the Chesapeake village council on Friday by village solicitor Derick Fisher. (The Ironton Tribune | Heath Harrison) 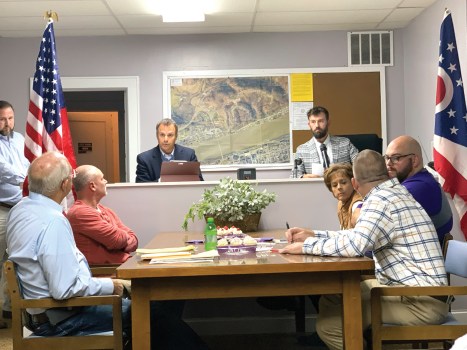 The Chesapeake village council voted on Friday not to keep police chief Steven Woodyard in his position. (The Ironton Tribune | Heath Harrison) 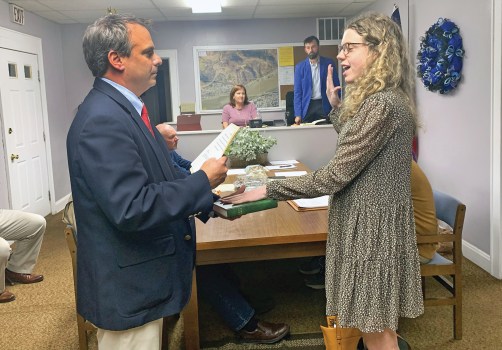 Katie Bentley is sworn in as a new member of the Chesapeake village council on Monday by village solicitor Derick Fisher. (The Ironton Tribune | Heath Harrison) 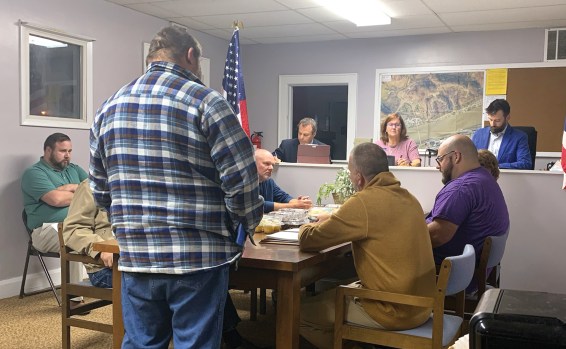 Former Chesapeake fiscal officer Lenny Abrams answers questions on Monday from council at Monday’s special meeting. The council voted to hire him as interim officer through the end of the year. (The Ironton Tribune | Heath Harrison) 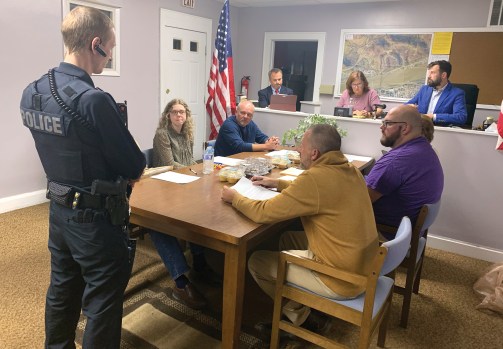 Chesapeake police Sgt. Josh Sammons answers questions on Monday from council members as they consider him for the position of interim police chief. He was approved in a 6-0 vote. (The Ironton Tribune | Heath Harrison) 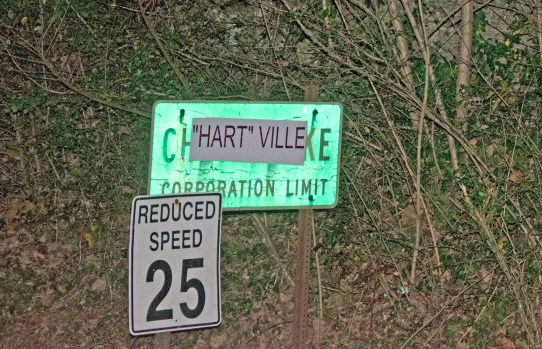 A sign at the limits of the village of Chesapeake on Big Branch Road is defaced on Friday with a sticker reading “Hartville.” Council member Paul Hart said there are others in the village with the same sticker and said they were applied by political critics. Mayor Kim Oldaker and four members of council resigned in October, citing disagreements with Hart, who was the sole remaining member of council after fellow member Nate Ittig became mayor. (The Ironton Tribune | Heath Harrison)

CHESAPEAKE — Once again, Chesapeake has a full village council and, once again, it found itself needing to fill the position of police chief.

The council, which consisted solely of longtime member Paul Hart, met for its regular monthly session on Friday.

This was a delay of four days from the original Oct. 1 meeting time, in order to allow Mayor Nate Ittig to have the 30 days on the job required to fill the vacant seats on the council.

In a typical scenario, the council would have 30 days to fill the vacancies before it fell to the mayor, but, with Hart the only person on council, there was not the needed quorum of four members to do so.

In the first order of business, Ittig moved to fill the vacancies.

As he had previously announced, Ittig named Lisa Blake to fill the seat vacated by Allen Barrett, Jacob Wells to fill Beth Brown’s seat and Drew Griffin to fill Lonnie Salyers’ seat. Each was approved.

Blake, Wells and Griffin ran unopposed in this month’s election and would have started their terms in January, regardless of the appointments.

Ittig also moved to name two others to fill the remaining vacant seats.

For the seat vacated by Larry Estep, he chose Marvin Henson, who was approved by council.

For the seat he left vacant upon becoming mayor, Ittig chose Katie Bentley.

Council member Paul Hart introduced Alex Martin as a possibility for the seat, who then spoke to council. However, the council chose unanimously to go with Bentley for the position.

All were sworn in except Bentley, who had a prior commitment and was unable to attend on Friday. She had previously accepted the nomination for the position, with the expectation that the meeting would take place at its original Monday time. She was administered the oath on Monday.

With enough of the council now in place, they first met in executive session for about 20 minutes to discuss pending litigation, then moved on to two items of business, which were both contentious.

First, Ittig asked that the council re-hire Lennie Abrams as fiscal officer. Abrams had resigned his position last month, unrelated to Oldaker and the council members leaving, but agreed to stay until the end of October.

During the discussion preceding the vote, Hart took issue with this idea and stated that Abrams, who has other jobs, was “overworked,” though he said he had “super good intentions.”

He said minutes for council meetings had not been corrected by Abrams and there was a backlog of work that needed to be completed.

Abrams took the position after Theresa Lawless resigned in 2020.

The council then voted and unanimously rejected hiring Abrams.

They were then advised by village solicitor Derick Fisher that they needed to schedule a special meeting “immediately” to deal with payroll, bills and to “keep the village going.”

This was set for Monday.

Second, Ittig moved to the matter of the village’s police chief.

Steven Woodyard was in the position for a six-month probationary period, having been promoted into position as an officer after the council moved to discharge Randy

Thompson as chief in February. Thompson has since filed an appeal in Lawrence County Common Pleas Court.

Ittig said the council had to decide on making Woodyard the permanent chief.

He said he asked Woodyard to type up a statement regarding his time in the position, which the mayor then read.

Hart and Ittig disagreed on semantics when the mayor referred to it as a list of Woodyard’s “accomplishments.” Ittig then said he misspoke and that it was a “record of service” and did not constitute an endorsement.

Woodyard’s letter stated that he had completed the required physical to be chief and taken part in required training. He said he had completed an audit of evidence in the department’s safe, as well as created an evidence log sheet. He stated that he had turned over domestic violence and accident reports to the state, something he said had not been done in some time prior to his becoming chief.

Woodyard also stated that he had radars for the village calibrated and had used a grant to implement body cameras for officers, utilizing phones. He said officers had completed firearms training and MARCs radios had been updated, as well as equipment procured for the village from other municipalities.

He said officers had carried out five felony drug busts since February and that several new officers had been hired for the department.

After the statement was read, Wells put forward a motion for the council to discuss the hiring.

Hart took issue with Woodyard’s record on various issues, stating that “things had changed so drastically” regarding officer hires and said the council had, in the past, interviewed candidates and checked credentials.

“We’ve just had people hired and salaries are at an all time high,” he said.

He said there were continuing problems with evidence and said residents told him officers had been writing too many tickets.

The council then voted, with Hart, Griffin and Wells opposing the hiring and Blake and Henson abstaining.

Fisher said that, as a result, the appointment failed.

Ittig then moved onto another item of business, regarding police personnel. As he began to speak, two officers came in and turned their badges into him, stating they were resigning upon Woodyard leaving.

This was greeted with applause from the back of the room, where several family members of the officers were seated as a group.

With the personnel matter no longer applicable with the officers resigning, the council then moved to adjourn the meeting.

Members of the public continued to linger in the chambers after the meeting. Ittig asked that anyone who was not an officer or a council member to leave, “out of respect to the officers” and so that matters regarding equipment could be taken care of.

With the resignations, this left the village with two officers in its police department.

The council met again in a special session on Monday, which was less heated than the preceding one. With Bentley seated midway through the meeting, all six positions at the table were filled.

Ittig said the first order of business was to vote to establish and appropriate funds for an interim fiscal officer, for which he said he wanted to appoint Abrams.

Abrams, who was present, then took questions from council members.

Wells asked about payments made to Lawless last year and asked why they were made.

“By December, were we done utilizing her,” he said.

Abrams said Lawless had continued to work on payroll for the village following her resignation and that it was recommended by the solicitor that she be compensated.

Griffin then asked about filings that were not made to the county auditor’s office from the village. He stated nothing had been filed from the village in the past 11 months.

Abrams replied that he had spoken and was working with deputy auditor Chis Kline.

“He’s OK with waiting and is aware of it,” he said.

Wells told Abrams he empathized with him.

“I know you took over from a dumpster fire, to say the least,” he said.

Ittig said that having Abrams in the position for the time being would help the village with complying with a three-year audit of 2019-2021 from the State of Ohio.

Abrams said he wanted to finish out the year, rather than have a new fiscal officer “start from scratch.” He said he is nearly finished with the annual financial report from 2020.

“I want to stay through the suit,” he said. “This year has my name on it.”

Steve Johnson, the fiscal officer for the village of Athalia, then spoke to council and said he was interested in the position.

“But I don’t want to take the job until all the books are straight,” he said.

Johnson, who said he had worked with Abrams and respected him from when he was Athalia’s police chief, said he would be willing to shadow Abrams for the next two months.

The council then voted, 6-0, to hire Abrams as interim fiscal officer through the end of the year at $1,300 a month.

Fisher said that hiring Johnson as an assistant could not be done at this special session, as they could only work on items already on the agenda.

Ittig then asked the council to establish and appropriate funds for the position of an interim police chief.

Sgt. Josh Sammons, who was the highest ranking of the remaining officers, then answered questions for council upon being nominated.

Sammons, who has been with the department for four years, said it came to him “as a bit of a surprise.”

Hart asked him if he thought he could “handle getting the department up and running,” to which Sammons said he could be.

The council then voted, 6-0 to hire Sammons. The room applauded in congratulations.

Next on the agenda was for the council to authorize the mayor to pay the village’s bills, but Ittig said, with Abrams serving in the interim, the matter was now “moot” and it was not taken up.

The council then had to vote on a new street commissioner for the village. The previous commissioner, Danny Burd, a former council member, resigned last month.

The last item on the agenda was appropriating funds to install and repair a street light at Third Avenue and Big Branch Road. This was tabled until the next meeting, 6-0.

The next meeting of Chesapeake council is set for 6 p.m. on Monday, Dec. 6.

Village shake ups
The past two months have brought significant changes to the Village of Chesapeake.

• Dennis Gibson – removed in a vote by council at the urging of Mayor Tommy Templeton on April 12, 2016

• Lennie Abrams – Served as chief after Gibson, until resigning in September 2016, after Templeton refused a donation for bulletproof vests from Riverside Recovery Services. Two officers resigned with Abrams

• Steven Woodyard – Appointed by Oldaker as interim chief. Served until Oct. 5, 2021, when council, under new mayor, Nate Ittig, declined to hire him after a six-month probationary period. Two officers resigned with Woodyard leaving.

• Josh Sammons – Was appointed as interim chief on Monday.