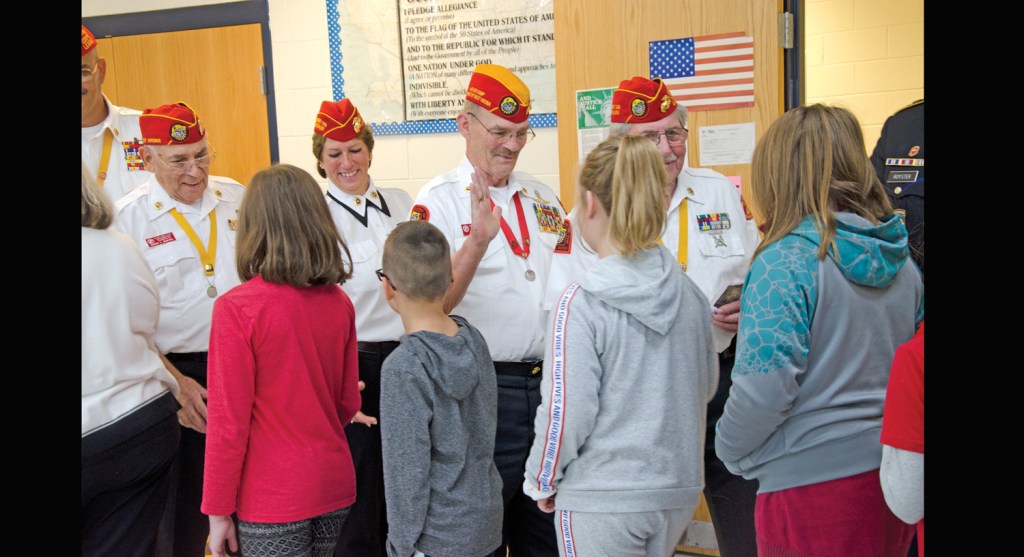 Prior to the COVID-19 pandemic limiting events, many schools in the county hosted Veterans Day events each year, paying tribute to those from the community who served. One of the largest is Burlington Elementary School’s annual observance, organized by the school’s librarian, Harriet Ramsey. (The Ironton Tribune | Heath Harrison)

This week, many schools in Lawrence County will host programs for Veterans Day, teaching students about the value of service to their country.

While events have been scaled down this year due to the COVID-19 pandemic, Burlington Elementary School has a tradition of hosting one of the most thorough programs in the county.

School librarian Harriet Ramsey has been organizing the event for several years, along with principal Michael Clay and the school’s music teacher, Jodi Bapst.

Ramsey said she does it because there is a need to “open the eyes” of children to the opportunities that are out there.

She said that service in the military is a path many can take.

“We try to do something different,” she said. “Because there are lot of things these kids don’t get to see or hear about.”

Typically, the school invites veterans from the district who sit on stage while children from each grade sing patriotic songs. This is followed by a keynote speaker, whom Ramsey said is recommended to the school.

One of the notable speakers was LTC Clydellia Prichard-Allen, the first female battalion commander for the Columbus Recruitment Battalion, who spoke in 2015 of her service and specifically addressed the girls among the students.

“You go out and make a difference and say, ‘Hey, I can do it just as easy as any of my male counterparts,’” she said. “Take a moment to figure out what you want to do. There’s a higher calling to everyone.”

A prayer is read and students also see the proper folding of an American flag, with narration explaining the meaning of each fold.

The event concludes with the veterans lining the hall and each grade passes, shaking hands with them and thanking them for their service.

Ramsey said she met him at her husband’s funeral and invited him to come to the school.

“They had never heard anything like it,” she said of the students’ reaction. “I watched and their eyes were as wide as moons.”

While the school will not be able to host the large assembly because of social distancing guidelines, Ramsey said they will still do an event to honor veterans from the area on Thursday, offering lunch to them.

“We’ll be doing that as a drive-through event,” she said.