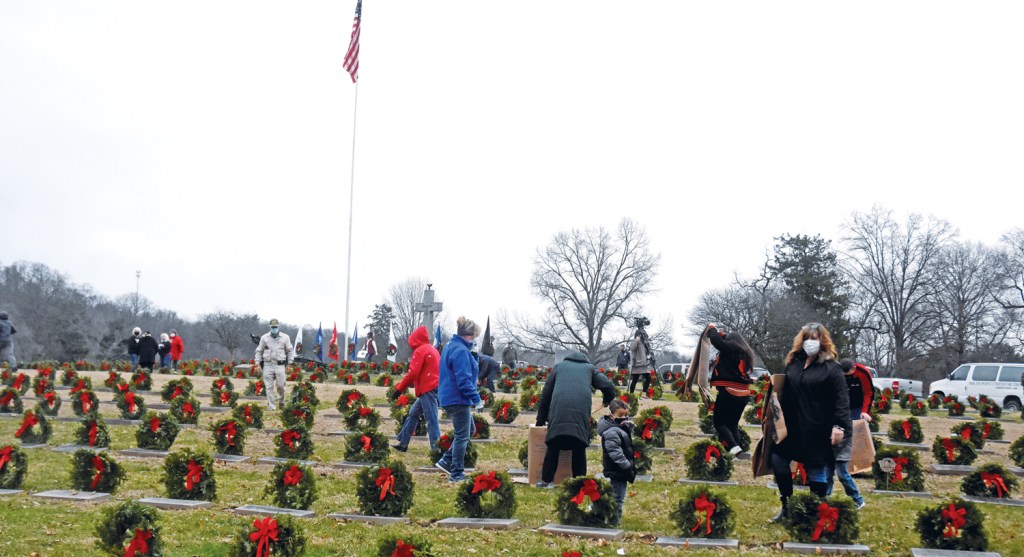 Next month, volunteers will honor veterans buried at Woodland Cemetery with a tradition that has been ongoing in Lawrence County for several years now.

Wreaths Across America is an effort to place a fresh evergreen wreath, with red velvet ribbon, on each grave at the cemetery’s Veteran’s Hill and Civil War section.

It has its roots in a national effort, which began in 1992, when the Worchester Wreath Company, of Harrington Maine, found themselves with a surplus of wreaths at the end of the holiday season.

Owner Morrill Worcester made arrangements for the wreaths to be placed on military graves in the older sections of Arlington National Cemetery, outside Washington, D.C.

This became an annual tradition and, in 2005, a photo of the wreaths in the snow appeared on the Internet and went viral. Since then, local groups across the country have organized similar campaigns for cemeteries in their areas. In 2007, Wreaths Across America was established as a nonprofit organization and by 2008, ceremonies took place at 300 locations in every state, Puerto Rico and in overseas cemeteries.

Wreaths Across America in Lawrence County began in 2011, when locals Linda Dalton and Juanita Southers saw the Arlington event and were so moved that they contacted the national group and became local coordinators to do the same for graves at Woodland.

With no political or religious agenda, the group wanted to honor all who served who were buried in the cemetery. Southers and Dalton began explaining the project to locals and, in the early years, funds were raised and wreaths were purchased for as many of the graves as possible, with a ceremony taking place each year when they were laid in mid-December. The wreaths were left up for 30 days through the holiday season.

In addition to honoring the veterans, Southers said it brought much-needed color in the winter months.

“This cemetery is so beautiful in the summer, but lays desolate in the winter,” she told The Ironton Tribune in 2015. “These wreaths make it beautiful during the holidays.”

She explained the meaning behind their mission.

“This brings to the forefront that we didn’t get all these freedoms just because they are there,” Southers said. “We have them because lots of people gave their lives that we might have them.”

Southers and Dalton oversaw the local group until Southers’ death in July 2019.

That year, Laura Brown took over as the local organizer, with Dalton continuing to advise her.

Brown, who along with her sister, Sally Ingles, had worked with Brown and Dalton, continued fundraising and, that winter, they were able to purchase enough wreaths for each of the 1,100 graves on the veterans hill.

“That was something Juanita always wanted to do, but never got enough,” she said, adding the group dedicated the feat to her memory. “She always said, ‘If I could look at the hill and see a wreath on every grave, I’d be satisfied.’”

Brown said the group was able to cover all the graves on the hill in 2020 as well, and has been able to cover a good portion of the Civil War section the past two years.

“I hope she is looking down and seeing it,” she said of Southers.

Brown said in addition to her sister, who lives in Florida and comes in for the holidays to assist, she receives a great deal of help from Lou Pyles, of the Ironton-Lawrence County Memorial Day Parade Committee, and Tim Carpenter, veterans service officer for the county, who help out with fundraising and the laying of the wreaths.

She said the group will again place them on graves in a ceremony this year at noon on Saturday, Dec. 18.

Anyone who would like to assist in the effort may join, she said, and they should show up at the cemetery shortly before noon.

She said wreaths are also for sale for $15 each for individual graves and can be purchased from the group to be placed on Dec. 18 and after.

The group is also fundraising with $1 candy bars, which are for sale at businesses around Ironton. Brown said those who want to purchase them can also call 740-646-2795.

For her third year in charge, Brown said the group is hoping they can cover the entire hillside again this year, as it is what Southers wanted.

“And it’s important to cover every grave, because Christmas always meant a lot to veterans,” she said.