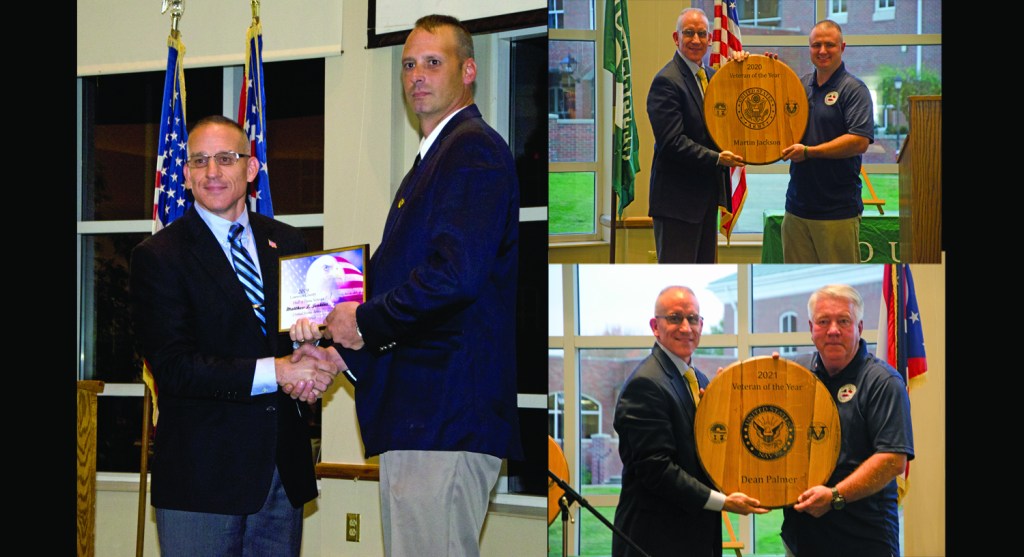 The Lawrence County Veteran of the Year award began in 2019, but, due to the COVID-19 pandemic, last year’s ceremony was called off.

So, at last week’s event, two local veterans were honored to make up for the lost year.
Martin Jackson was named as 2020’s recipient, while Dean Palmer was named for this year.

The two follow Matthew Jenkins, who was honored in 2019 as the inaugural Lawrence County veteran of the Year.

To give an idea of the community spirit of the award, Jenkins, a Chesapeake native, served in the U.S. Army from 2005-2010 and the National Guard from 2011-2016. He has also been assistant chief of the Aid Township Volunteer Fire Department, where he has worked with the junior firefighters and local schools on fire safety, and has served as vice president of the Lawrence County Fireman’s Association, as chaplain and on the honor guard for the Symmes Valley Veterans, VFW and an advisor for the Arabia All-Stars 4-H Club.

“It was something we always wanted to do,” Holliday told The Tribune last year, noting that the inspiration followed a state honor for a local veteran. “And then, when Dean Cooper was named to the Veterans Hall of Fame for the State of Ohio, we realized just how many amazing veterans we have here in the county.”

The Lawrence County Veterans Hall of Fame recognizes Lawrence County veteran residents who have served with distinction, honor and exemplary service while in the military or a veteran who has after service continued to contribute to their communities, state and nation in an exemplary manner.

“It’s a wonderful program,” Lou Pyles, who served on the Veteran of the Year committee, said. “People know that a lot of veterans continue to give to their communities when they return from service.”

She said the award is based on the recipient’s total service record.

These contributions can be in the areas of military service, professional achievements, civic or public service, volunteerism, veterans’ advocacy or other significant achievements over the life of the nominee.

Those who are past or current Lawrence County residents, have received an “Honorable” discharge for all periods of service and are of good moral character are eligible.

Copies of the nomination form can also be emailed, faxed or mailed from Carpenter, of the Lawrence County Office of Veterans Service by contacting them through Facebook, calling 740-533-4328 or emailing tcarpenter@lawrenceoh.com.