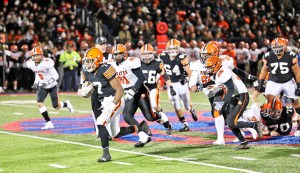 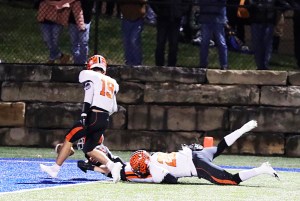 Ironton Fighting Tigers’ running back Landen Wilson dives into the end zone for a touchdown against the Wheelersburg Pirates in the Division 5 Region 19 semifinals on Saturday. Ironton lost, 17-14. (Photo by Tim Gearhart)

PORTSMOUTH — The Ironton Fighting Tigers showed why you should never play with guns.

“Never should have listen to the serpent

You shot yourself in the foot again”

Skream & Example sang this song 10 years ago, but they could have been inspired on Saturday night in the Division 5 Region 19 semifinal game.

Ironton shot itself in the foot five times — two lost fumbles and three interceptions — that crippled the Fighting Tigers’ offense in a 17-14 upset loss to the Wheelersburg Pirates.

The serpent was not being able to escape the Pirates’ pass rush off the edge all night that harassed quarterback Jon Wylie who was just 1-of-10 passing for 16 yards and the three picks.

Ironton (11-2) dominated the game but lost too many scoring opportunities with turnovers and gave Wheelersburg its scoring chances with the same turnovers.

The Fighting Tigers outgained the Pirates 167 yards — all on the ground — to a mere 32. Ironton had six first downs to just one for Wheelersburg.

Wheelersburg’s winning touchdown came after an interception by Casey Doerr with 6:06 to play in the game.

The Pirates had to go just 37 yards and they did it in nine plays — all on the ground — with Ethan Glover running the final 3 yards with 1:57 to play.

Ironton looked like it had the clinching drive in the third quarter. A score would have made it 21-10 and it’s doubtful the Pirates could drive for two scores. Wheelersburg never drove the ball past midfield.

All three scores came after turnovers with possessions starting at the 16-yard line (field goal), 3- and 37-yard lines in Ironton territory.

The first turnover came when Ironton fumbled the ball away on the second play of the game and the Pirates recovered at the 16. Five plays later, Braxton Sammons kicked a 26-yard field goal with 8:52 on the clock.

Ironton answered three plays later as Jaquez Keyes ran the ball three straight plays for 2, 5 and 55 yards, the latter for a touchdown with 7:22 left in the quarter.

Wheelersburg had a third-and-4 when Angelo Washington stripped the runner and Ashton Duncan recovered at the Pirates’ 19.

The Pirates’ Carson Williams intercepted a screen pass and ran it to the 2-yard line. Three plays later Eli Jones ran the final yard and it was 14-10 after Braxton Sammons kick with 9:24 to go in the half.

Ironton then drove from its own 20 to the Pirates’ 24 only to have a fourth down pass go incomplete.

Neither team scored in the third although Ironton had the afore mentioned deep drive that ended on a fumble.

Ironton finished the game with 236 total yards including 220 on the ground on 47 attempts.

Keyes ran 19 times for 138 yards — both career highs — but only ran the ball six times in the second half and just one of those carries came early in the fourth quarter.

Due in part to the turnovers, Ironton ran 31 plays in the first half and 21 in the second including just seven in the fourth quarter.

Jones ran 16 times for 67 yards and Glover had 41 yards on 15 attempts as the Pirates got only 96 rushing yards for the game 32 more passing.