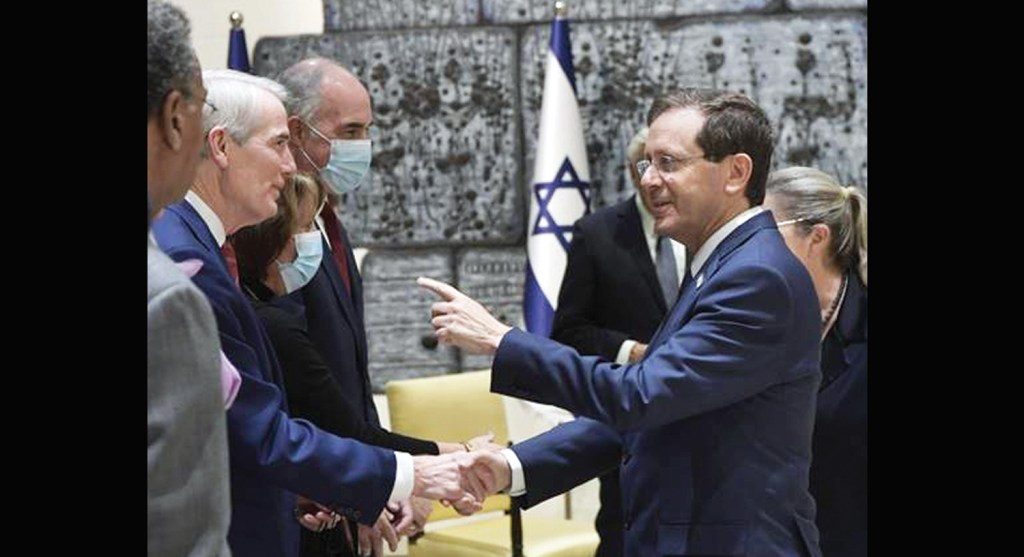 The bipartisan congressional delegation, led by U.S. Sen. Ben Cardin, D-Maryland, also met with Palestine’s Prime Minister Mohammad Shateyyah and ambassadors from United Arab Emirates, Egypt, Morocco, Bahrain, Jordan and Kosovo to discuss the significance of the Abraham Accords, and the importance of normalization of relations between Israel and Arab nations.

“We had a very constructive trip and good discussions with Israel’s Prime Minister Bennett and President Herzog, Palestine’s Prime Minister Shateyyah, and ambassadors from multiple Arab countries on ways to support normalization efforts between Israel and the Arab world, especially through the Abraham Accords,” Portman said in a news release on Thursday. “Promoting peace and security in Israel, and the surrounding areas, remains a priority for myself and my colleagues in Congress. I was glad I was able to see firsthand the work so many are doing to ensure long-term stability in the region.”

In the afternoon, Portman visited the Shimon Peres Center for Innovation and Peace in Tel Aviv to hear about Israel’s innovation and the center’s programs bringing together Israeli and Palestinian youth. In the evening, Portman attended a reception in honor of the Abraham Accords with the ambassadors of Bahrain, Egypt, Jordan, Kosovo, Morocco and UAE to Israel and discussed ways to deepen the accords, especially by strengthening U.S. trade and economic ties with each country.

On Tuesday, Portman flew by military helicopter to Israel’s border with Lebanon, where he met with Defense Minister Gantz and Brigidaier Gen. Binder of the 91st Division to hear an update on the crisis in Lebanon, Hezbollah’s rocket arsenal and the security implications for Israel. Portman then toured the Rafael Factory, where components of the Iron Dome middle defense system are manufactured. In the evening, Portman visited with Herzog and reiterated his strong support for Israel.

On Wednesday, Portman went up the Mount of Olives and met with an Israeli and a Palestinian tour guide from the People to People Program who help further peace by conducting dual-narrative tours of Jerusalem and its surroundings. In the afternoon, Portman met with members of the Knesset and former mayor of Jerusalem, Nir Barkat, to discuss the myriad of security threats facing Israel. In the evening, Portman visited the Knesset and visited with Foreign Minister Lapid, with whom he discussed the important of Israel’s defense against conventional, and nuclear threats, from Iran and Prime Minister Bennett, with whom he discussed the importance of bipartisan support for Israel, and shared concerns about China’s investment in Israel. Portman then visited the Knesset chamber and listened to floor debate by the members.