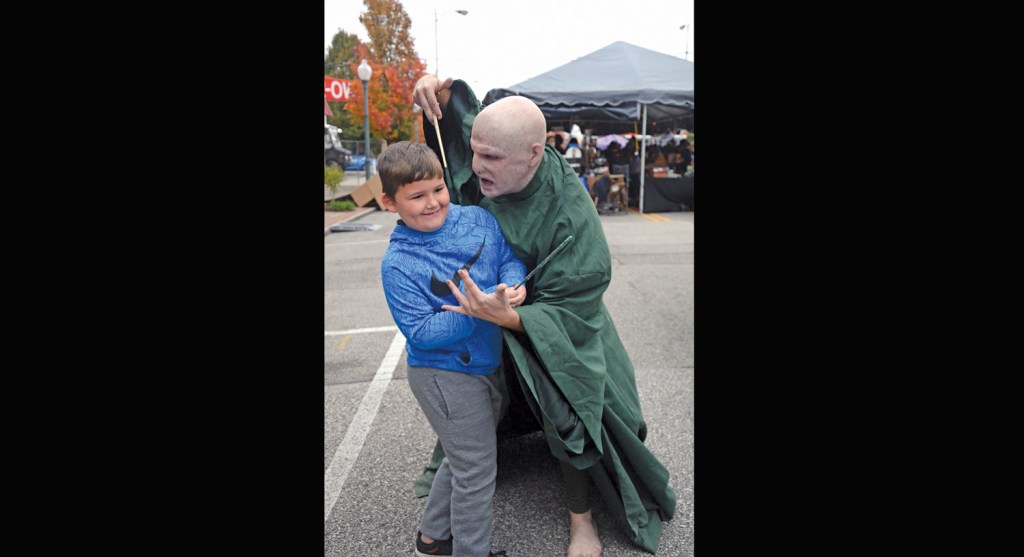 A professional cosplayer from Cos-Ohana, an Ohio group, dressed as the villain Lord Voldemort, interacts with a young Harry Potter fan on the street during Ironton Wizardfest on Saturday. (The Ironton Tribune | Heath Harrison)

Ironton Wizardfest was back and after a year off, the crowds were happy to be back and take it to the “next level,” said Brad Bear, one of the organizers of the event, as the sun set on Saturday evening.

He said people were really into the whole event this year and thinks part of it is that Wizardfest wasn’t held last year due to restrictions on large gatherings of people because of the COVID-19 pandemic.

“People have had a couple of years to perfect their cosplay and really get excited about it,” Bear said. “In terms of numbers, the crowds are definitely as good as always if not better. In terms of energy, everybody came kind of next level, I think it has to do with the pandemic. We have all been looking for something fun and hopeful and something to just let our hair down and just let loose. And that is what Wizardfest lets us do.”

In fact, it was hard at times to tell who was a fan who had assembled a really good costume and who were the professional cosplayers like the man portraying the main Harry Potter villain, Voldemort, who not only looked properly creepy, but didn’t wear shoes in the 40-degree weather.

“That guy was phenomenal,” Bear said, adding the cosplayer was with Cos-Ohana, a cosplay group that specialized at looking as close to the source material as possible and performs at a number of events around Ohio.

Lord Voldemort interacted with attendees from mock threatening kids dressed up as their favorite Hogswart character to posing for pictures and selfies with anyone who asked.

“And the attendees, they really stepped it up and really got into character,” Bear said. “It’s just so much fun.”
Among the fans dressed up as Hogwarts students were the Reffitt family who all dressed up as members of the Gryffindor house. They drove down from Beaver, Ohio to attend Wizardfest.

“I came to have fun,” said Amelia Reffitt, 9, and when asked how much she enjoyed Harry Potter, she replied “a lot, lot, lot.”

She is on her first read of the book series and is in the middle of “Harry Potter and the Chamber of Secrets.”

She said it was her parents who convinced her to come to the event.

“I didn’t know about this until about four weeks ago,” she said. “And I’ve been excited ever since.”

Her mother, Mariane, said she first read the books when they came out.

“So, I am really excited she is exploring them now,” she said. “I accidentally picked up a copy of ‘Harry Potter and the Sorcerer’s Stone’ when I was 22 and just couldn’t put them down.”

Rich Reffitt, who was dressed as Harry Potter, said he got into the series when the movies came out and got to see the last four films in the theater.

“I am on my first read of the books, because Amelia is reading them and convinced me to read them too,” he said. “I think Wizardfest is great. It is a great way to get people out into the community and have some fun together.”

The Harry Potter celebrities that came to Wizardfest this year were Jim Tavare, James Payton and Walles Hamonde.

This was the first visit for Tavare, who played Tom, the innkeeper of The Leaky Cauldron in “Harry Potter and The Prisoner of Azkaban. He flew in from Los Angeles where he works as an actor on a number of shows and is a professional comedian, known for his formal wear and upright bass.

When asked why he left sunny LA to visit the Midwest on a freezing day, he joked “Well, I’m a glutton for punishment. I had too much nice weather in Los Angeles and thought it was time to change it around a bit. Of course, being British, I missed the rain and the cold.”

He said he never gets recognized on the streets for being Tom the innkeeper “because I’m a bald guy and if you’re a bald guy, you look a lot like every other bald guy. But I have grown a mustache and that gets me more niche work. Ironically, I’m recognized for a couple of things I’ve done since Harry Potter because of the mustache. It’s a good look.”

Asked if he has done a few conventions and enjoyed them, he said, It’s an unusual way to make a living but you get to meet the people and that’s quite important,” he said. “You take in for granted, living in your ivory tower of Los Angeles and Hollywood and all that. It gets you out on the road and it’s only the people in movies like this and Star Wars that get to do this and have the fun.”

This was the second Ironton Wizardfest for Hamonde, who despite the cold temperatures was wearing shorts.
“It’s not that cold here,” he said, laughing.

He and Payton flew in from England for the event and the pair performed together in a show called “Order of the Improv,” where they took questions from the fans in the audience and then tried to answer them in the style of Harry Potter characters. He said he loves crowd that shows up every time.

“We were very lucky to be invited in 2019 and we had a terrific experience here and loved working with Brad Bear and Seth Bear. So getting an invitation back was a terrific honor and we couldn’t turn it down. We were having a ball doing the improv.”

Payton said the invitation to return was something they couldn’t say no to.

“Everyone was so kind and friendly to us last time and, equally, we have been welcomed back like family members,” he said. “It is absolutely our pleasure to come back.”

Payton and Hamonde were amongst the first British citizens to fly to the U.S since the COVID-19-related restrictions were lifted on Nov. 8.

“I think it was serendipitous that it all happened at the right time,” he said. “We were hoping that things would open so we could be here. In comedy and acting, it is all about timing. Well, the timing seemed to work this time.”

And would he come back for a third visit?

“If Brad and the team would have us back, we would be delighted,” Payton said.