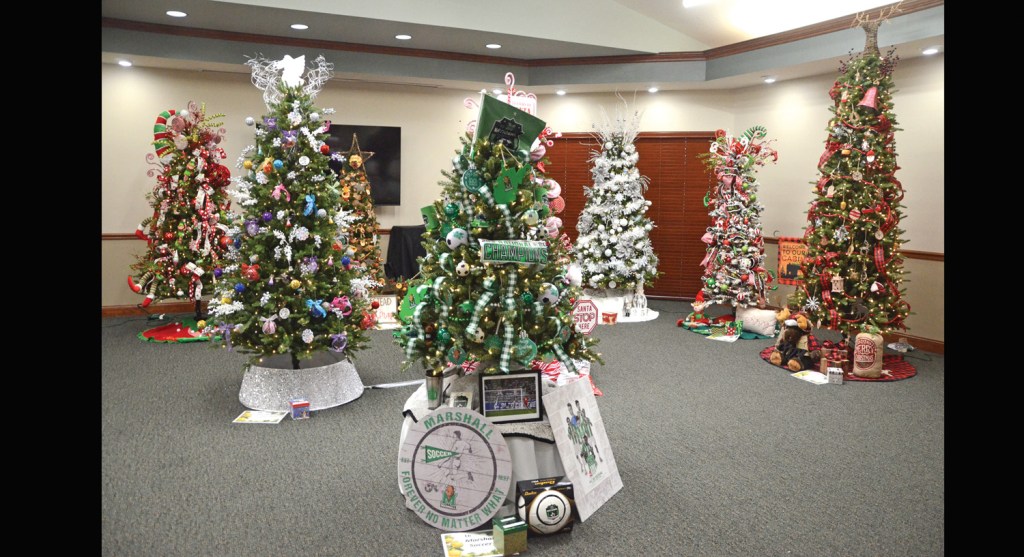 More than 30 trees are on display in the Lawrence County Chamber of Commerce’s Festival of Trees and Christmas Market, which runs through Saturday. (The Ironton Tribune | Heath Harrison) 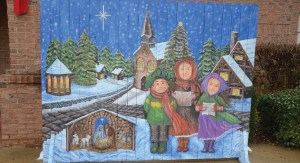 Hand painted decorations at the entrance to the Lawrence County Chamber of Commerce’s Festival of Trees and Christmas Market. (The Ironton Tribune | Heath Harrison)

SOUTH POINT — The Lawrence County Chamber of Commerce’s Festival of Trees and Christmas Market kicked off Friday and this year’s event is the largest yet.

“We like to see it grow,” chamber director Shirley Dyer said.

The Festival of Trees launched seven years ago, organized by the Chamber and hosted at Ohio University Southern’s Proctorville Center. It eventually moved to the Chamber headquarters, located at 216 Collins Ave. in South Point, where it has been accompanied by the Christmas Market.

Trees in the festival are decorated by local businesses and schools and are up for bids throughout the duration of the event.

Dyer said this year, there are more than 30 trees in the event, a record.

The market has also seen growth each year. Dyer said, when they started, they had 18 local artisans and vendors, increasing gradually the following years. This year, they have 45, almost double the amount they had in 2019, the last time the market took place. (The event was called off last year, due to COVID-19 precautions, while the Festival of Trees took place virtually.)

The festival opened on Wednesday with a VIP reception, followed by a 5K luminary run, presented by Armstrong, on Thursday, before full activities began Friday, running until 8 p.m. 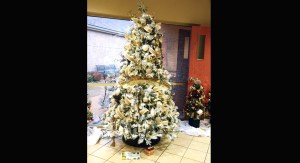 Dyer said there are several special activities planned for Saturday, with hours set for 10 a.m.-8 p.m.

Kids Day activities will take place Saturday from 10 a.m.-2p.m., which will include breakfast with Santa, a Christmas maze, pony cart rides and candle making. The event is sponsored by Necco and McDonald’s.

From 5-7 p.m., Dyer said the event will have “a grand finale,” featuring a York Family Sing Off.

“They’re the family of Joe Freeman, who own Quality Care Nursing,” Dyer said. “And they performed on the Grand Ole Opry.”

Also part of the musical showcase will be several church choirs, as well as a bonfire and caroling.

Admission to all events is free, but those attending Kids Day activities are asked to bring a can of food, which will be distributed to Harvest for the Hungry food pantry in Ironton.

This year’s events were sponsored by sponsored by A&L Home Care and Training Center, and Mountain Health Network.
Bids will be taken for trees at the event until the close of the event on Saturday.

Marty Conley, of the Lawrence County Convention and Visitors Bureau, said a code will be available on TV screens that visitors can use to go to the bidding site, which can also be accessed through the Chamber’s Facebook page and the Festival of Trees page on social media. 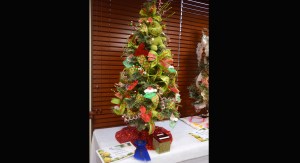 Notifications will be sent if a participant is outbid, Conley said, and those who win will receive a message giving them instructions on picking up the tree.

Proceeds from the auction will go toward scholarships for Lawrence County students, as well as community development programs for businesses in the county.

Those attending will also have a chance to vote on a People’s Choice winner.

“People are ready to get out and do something in the community,” he said. 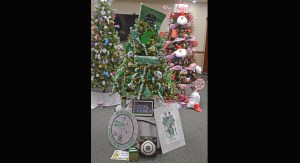 A tree decorated by the Marshall University men’s soccer team is among those on display at the Lawrence County Chamber of Commerce’s Festival of Trees and Christmas Market. (The Ironton Tribune | Heath Harrison)