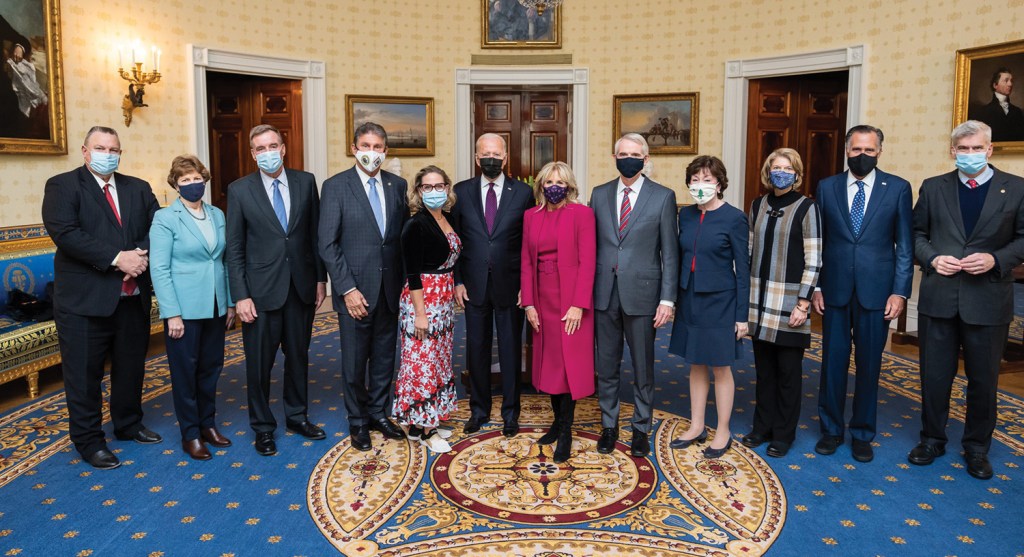 President Joe Biden and first lady Jill Biden appear with a bipartisan group of U.S. senators, including Rob Portman, R-Ohio, fifth from right, on Monday at the White House. The group negotiated the passage of the infrastructure deal that Biden signed into law on Monday. (White House photo)

WASHINGTON, D.C. — U.S. Sen. Rob Portman, R-Ohio, was among leaders from Congress who appeared at a ceremony at the White House when President Joe Biden signed a $1 trillion infrastructure deal into law.

Biden declared that the new infusion of cash for roads, bridges, ports and more is going to make life “change for the better” for the American people.

“My message to the American people is this: America is moving again and your life is going to change for the better,” he said.

“Today is an historic day for America and my constituents in Ohio,” Portman said. “Presidents and members of Congress of both parties have talked for decades about the need for significant investments to improve our nation’s dated infrastructure. Finally, Congress put partisanship aside and came together in a truly bipartisan effort to write legislation that will have a positive impact on the lives of all Americans.”

Portman said, for Ohio, the deal means a $9.2 billion investment in the state’s roads and highways, along with special funds to assist with bridge repairs, including a long-sought repair and expansion of the Brent Spence Bridge in Cincinnati.

Biden said the deal represents a bridge in the partisan divide.

“Folks, too often in Washington, the reason we didn’t get things done is because we insisted on getting everything we want. Everything,” Biden said. “With this law, we focused on getting things done. I ran for president because the only way to move our country forward in my view was through compromise and consensus.”

Portman celebrated Biden’s willingness to jettison much of his initial proposal to help bring GOP lawmakers on board. In order to achieve a bipartisan deal, the president had to cut back his initial ambition to spend $2.3 trillion on infrastructure by more than half.

“This bipartisan support for this bill comes because it makes sense for our constituents, but the approach from the center out should be the norm, not the exception,” Portman said.