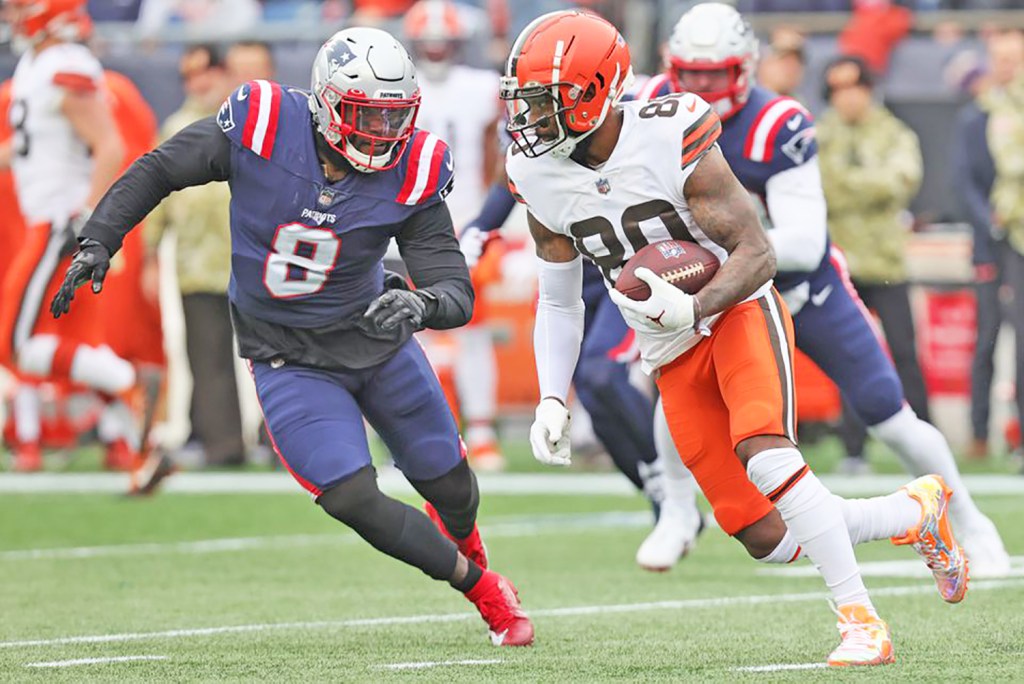 CLEVELAND (AP) — The starting quarterback is injured and won’t be close to 100 percent — if he even plays. The passing game isn’t producing nearly enough big plays or points and the season has grown desperate.

And you thought the winless Detroit Lions had issues?

The Cleveland Browns have similar problems.

Shaken by an embarrassing, humbling 38-point loss at New England last week, when Patriots coach Bill Belichick seemed to enjoy toying with his former team, the Browns (5-5) head into Sunday’s matchup against the Lions (0-8-1) without any more wiggle room in a season going sideways.

Their hopes of winning the AFC North, making the playoffs and perhaps a Super Bowl title run seem a bit far-fetched at the moment. But in a nonsensical season in which elite teams are few and far between, anything seems possible.

“We’re within striking distance,” said Browns left guard Joel Bitonio, who has been on more than a few roller-coaster rides in Cleveland since 2014. “We’re not where we want to be, but we have everything left. There’s a lot less room for error now, but we’re good.”

Actually, it’s hard to figure out the Browns — one of the NFL’s most talented yet unpredictable teams.

Two weeks ago, they overpowered Cincinnati 41-16 while playing their most complete game this season.

A week later, it was just the opposite as the Browns couldn’t do anything right.

The past few days have been filled with corrections and reflection.

“It’s a humbling process,” said quarterback Baker Mayfield, who expects to face the Lions despite shoulder, foot and knee injuries. “It’s very easy to look around and try to find excuses, but when it comes down to it we have seven more games right now to be able to figure out how to make it work.

“And we have a lot of division games in front of us, and that’s the most important part.”

The Browns aren’t good enough to take anyone lightly, especially the Lions, who managed a 16-16 tie last week at Pittsburgh and were within a missed field goal in overtime of shocking the Steelers.

Detroit returned from its bye week emphasizing the run on offense and playing with the same intensity on defense that has kept the Lions in most games.

Bitonio played on Cleveland’s 0-16 team in 2017, when the Browns lost twice in OT and lost four other games by four points or less.

He said the Lions will not be overlooked.

“They play as hard as anybody,” said Bitonio, who has warned his younger teammates about the pitfalls of overconfidence. “It’s not like you’re at Alabama, just walk in and beat a team. Records don’t mean anything. You come out, you have to perform.

“You just have these games where it’s like, ‘Oh, this team should win.’ But it’s the NFL, so anything can happen.”

If Goff, who has a league-low 27.3 rating, can’t play, backup Tim Boyle will make his first career start. Boyle has been on injured reserve since breaking his thumb in the preseason and undergoing surgery. He spent the previous two seasons backing up Aaron Rodgers in Green Bay.

Cleveland’s unexpected issues on offense can be partly blamed on Mayfield’s injuries, Odell Beckham Jr.’s messy release or the Browns just being overrated.

Whatever the case, they’ve scored 14 points or less in five of the past seven games, and haven’t had more than 217 yards passing in the last five.

The three-time Pro Bowler receiver, who missed four games with a knee injury, has just 23 catches for 219 yards and no touchdowns.

“We will find ways to get the ball into No. 80’s hands and get going again,” Mayfield said.

“Whether it’s quick throws, double moves or in the run game,” Van Pelt said. “Whatever it is, but he needs to touch the ball more, and we’re aware of that.”

They are the team’s sixth and seventh kickers since the start of training camp.

Santoso pushed an extra point wide right in the third quarter at Pittsburgh and then missed a 48-yard field goal in overtime that would have ended the Lions’ winless slide.

“Kind of hate it for him, but at the same time, that’s the nature of this business,” Lions coach Dan Campbell said. “Sometimes you only get two chances, and you’ve got to perform if that’s your job description.”

Patterson will fill in while Austin Seibert remains on the injured reserve list for at least two more games with a hip injury.