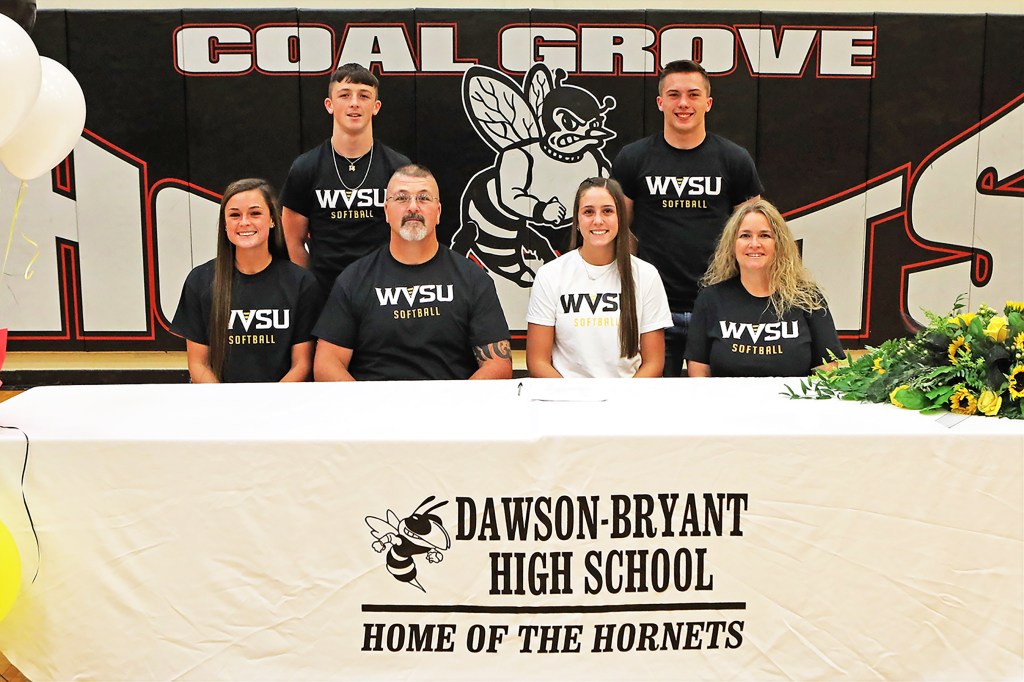 COAL GROVE ¬— When a player signs to play at the college level, they usually set some goals.

Even if she had to take her sister’s job.

Kaleigh flashed a big Cheshire Cat grin as she laid out her plans.

“I got to scrimmage them this year and I didn’t strike Kasey out, but I made her hit it back to me with a change-up, so I hope my hard work pays off and I can play my freshman year,” said Kaleigh.

“I think it will be fun. It’ll be competitive. I think we’ll want to be competitive with each other like we were in travel ball. I think that will be the main thing playing together again. I’ll try to beat her out of her spot maybe.”

Her sister was glad to be re-united with her sister but was a lot more tight-lipped.

Kaleigh had plenty of offers, some for softball, some for basketball and some for both. Ultimately, the lure of playing alongside her sister won out.

“But, I want to go play with Kasey. I’ve only gotten to play travel ball with her, but never any other regular season sports.”

“West Virginia State was the only school I looked at me for softball. My other schools I looked at were for basketball.

Not only did West Virginia State talk to Kaleigh about softball, but there were discussions about playing basketball as well.

“D2 would be tough (playing both sports). Otterbein wanted me to do both, but I kinda wanted to stay in D2 and above range just to help my parents out with money,” said Kaleigh.

“This high school season has been the best I’ve had and it really changed my mind about softball for a minute. But I had to realize what was going to make me happy for the next four years and playing with Kasey one more year, I couldn’t pass up on the opportunity,” she said.

Although she works hard at playing softball during the offseason as well as in-season, Kaleigh said there have been several people who have helped mold her and reach her current level of success.

“My dad was my travel ball coach all this time. Steve Dillow helped me a lot during elementary and little league. Kenny Waulk, Barb Moore and Scott Moore had a big impact on my athletics and always pushed me to be the best,” she said.

Her father is also the police chief in Proctorville and she said he maintains a watchful eye along with his fellow officers.

“He makes sure all the cops are looking after me whenever I’m driving so it’s kind of scary,” she said with a laugh. “He gives (boyfriend Owen Hankins) a hard time.”

Academics and athletics have been her main focus so much that Kaleigh said she would say she’s not really an adventurous person.

“I’m either home in bed or with a ball,” said Kaleigh. “It’s always sports, non-stop. I was told that Elvis Presley dated a girl who was my cousin.”

She plans to major in education with a degree to teach physical education and health.