Getting ready for Thanksgiving 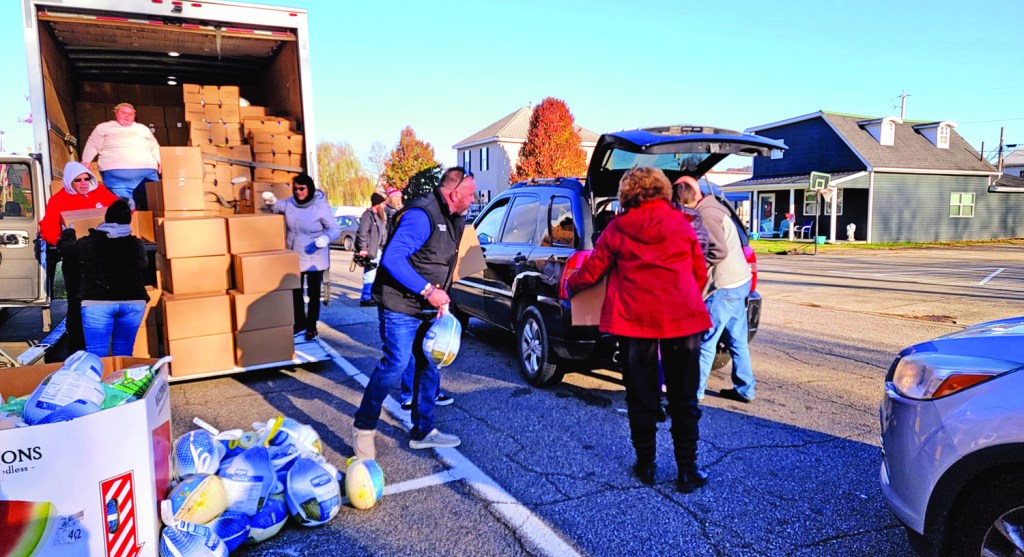 On Tuesday morning, volunteers helped Harvest for the Hungry distributed boxes of Thanksgiving food to a couple hundred people at the First Church of the Nazarene in Ironton. (The Ironton Tribune | Mark Shaffer)

Harvest for the Hungry distributes hundreds of meals on Tuesday

There was a parking lot full of cars and vehicles lined up around the block waiting for their opportunity to pick up a turkey and a box full of the Thanksgiving trimmings.

She said some were concerned that they wouldn’t be able to get food, but Porter assured them that “as long as you have a ticket, you have a turkey.”

Within a half hour, a very efficient crew of 15 volunteers had emptied the parking lot and distributed a couple hundred meals.

Porter said they got to the First Church of the Nazarene on Fourth Street in Ironton around 7:30 a.m. “and we had a parking lot full, another parking lot half full and they were parked around the corner. So, we started directing traffic and getting people lined up and tickets handed out.”

The tickets are used to track how many boxes of food were given out. About 500 were printed up.

By 9 a.m., over 200 tickets had been distributed. People were picking up for more than one family, most people had tickets for four families and one home health nurse was picking up meals for eight of her clients.

There were about 15 volunteers including members of the First Church of the Nazarene, Impact Church, Christ Episcopal Church and Christ Temple as well as Lawrence County Commissioner Freddie Hayes and commissioners’ clerk, Katrina Keith.

“Thank goodness so many volunteers showed up,” Porter said. “We were worried that we wouldn’t have enough to lift all these turkeys and boxes.”

And at eight pounds a box, that meant that there was two tons of food to be moved.

It takes a long time for the food pantry to organize the giveaway.

“We start in May,” Porter said. “We start gathering up things then because each box has vegetables, mashed potatoes, gravy, two cans of pumpkin, two cans of peanut butter and some kind of nuts.”

This is the eighth year that Harvest for the Hungry has had the Thanksgiving food giveaway and it was the first year that they couldn’t order turkey in bulk amounts.

“We had to go all over Ohio to get turkeys,” Porter said. “We had them running up to Circleville to get some. And thankfully, the National Wild Turkey Federation Longbeard Chapter donated 100 turkeys last week,” Porter said.