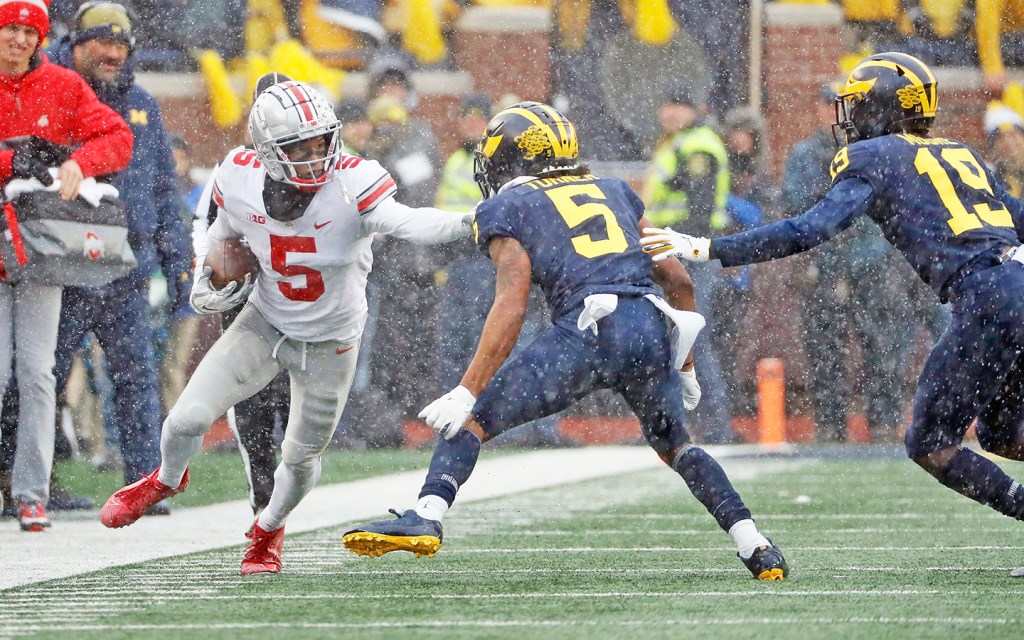 ANN ARBOR, Mich. (AP) — Jim Harbaugh got the win he wanted perhaps as desperately as any coach in sports.

Hassan Haskins matched a school record with five rushing touchdowns and Aidan Hutchinson had three sacks to break a single-season program mark, helping No. 6 Michigan finally beat No. 2 Ohio State 42-27 Saturday to give Harbaugh his first win as a coach against the Buckeyes.

The Wolverines clinched the Big Ten East and will play in the conference title game next week with playoff hopes in hand after snapping an eight-game losing streak to Ohio State.

Harbaugh has been dissed and dismissed as a coach long on hype and short on substance over his first six seasons with his alma mater, but he earned a win that should quiet at least most of his critics.

“I’m so happy to be a part of his first win, and to have a top-five game at home,” Hutchinson said. “He was just so happy.”

Minutes after the game, long-suffering fans filled the Big House turf to celebrate a rare win in the storied series and they were in no rush to leave as music blared.

“Watching the snow fall and the crowd rush rush onto the field was truly a surreal moment,” said Michigan quarterback Cade McNamara, who was 13 of 19 for 159 yards with an interception.

Ohio State had a school-record winning streak in the rivalry, taking 15 of 16 to turn The Game into its game.

The Buckeyes (10-2, 8-1) blew their chances to continue their dominance with 10 penalties, many before the snap, and because they simply could not stop Michigan’s running game.

“I feel awful,” Ohio State coach Ryan Day said. “I just got done talking to the team, and when you work this game 365 days out of the year and you come up short, it’s a failure. It hurts. It hurts a lot.”

Harbaugh clearly had his team ready to beat the Buckeyes.

After Harbaugh’s pay was slashed in his new deal last winter in part because of his lack of success against the Buckeyes, he reshaped his coaching staff again and renamed a running-heavy period of practice the “Beat Ohio,” drill for to add another layer of focus on the rivalry.

It seemed to work.

Haskins had 169 yards rushing on 28 carries, scoring a go-ahead touchdown late in the second half and four more after halftime to pad Michigan’s lead.

“It’s an amazing feeling, I want to thank each and every one of my linemen,” Haskins said.

Blake Corum returned from a two-plus game absence to run six times for 87 yards, helping the Wolverines gain a total of 297 yards on a ground against a rival that has pushed them around for much of this century.

“It was dominant,” Harbaugh acknowledged. “There was continual movement up front by the guys.”

The Buckeyes could not disagree.

“You have to stop the run in a Big Ten game,” Ohio State safety Bryson Shaw said. “It’s embarrassing.”

Harbaugh also seemed to out coach Day, who had not lost a Big Ten game until Saturday, by sprinkling in some surprise plays such as a slot-around with A.J. Henning running for a 14-yard TD to cap the game-opening 10-play, 75-yard drive and calling a flea flicker later in the game that fooled Ohio State.

Ohio State’s high-powered offense seemed rattled against Michigan’s new-look defense with first-year coordinator Mike Macdonald making all the right moves. Hutchinson, who set a single-season school record with 13 sacks, was in the backfield all day.

“Definitely should be in strong consideration for the Heisman Trophy,” Harbaugh said.

C.J. Stroud was 34 of 49 for 394 with two touchdowns, including a 25-yard pass to Garrett Wilson that gave the Buckeyes a 10-7 lead early in the second quarter.

The Buckeyes turned it over on downs on their last possession, failing to protect Stroud. He was sacked four times, doubling the total from any other game this season.

“People are probably going to hate me for it, but I know in my heart I put up everything,” Stroud said.

After Harbaugh’s news conference, he was met by athletic director Warde Manuel.

The Wolverines and Buckeyes were pushing, shoving and talking in the tunnel at halftime. The emotions spilled out onto the field many times.

As Michigan receiver Roman Wilson lay in the end zone, he grabbed the left leg of cornerback Cameron Brown, who responded by ripping Wilson’s helmet off and getting called for unsportsmanlike conduct.

That set off a scrum that officials and coaches were able to contain.

“These guys have been disrespecting us, stepping on our jerseys, talking about hanging 100 on us,” Hutchinson said.

Ohio State: The Buckeyes had won 26 straight Big Ten games, a streak that trailed only the school’s 30-game run from 2012-15 in Big Ten history. Ohio State also had won 21 games in a row over ranked Big Ten teams.

Michigan: The Wolverines will have to come down quickly and focus on the Big Ten title game. Win that and a spot in the College Football Playoff is practically a lock.

Michigan will jump past Ohio State in the College Football Ranking and the AP Top 25.

Michigan: Plays Iowa in Indianapolis next Saturday. The Wolverines did not play Iowa during the regular season.