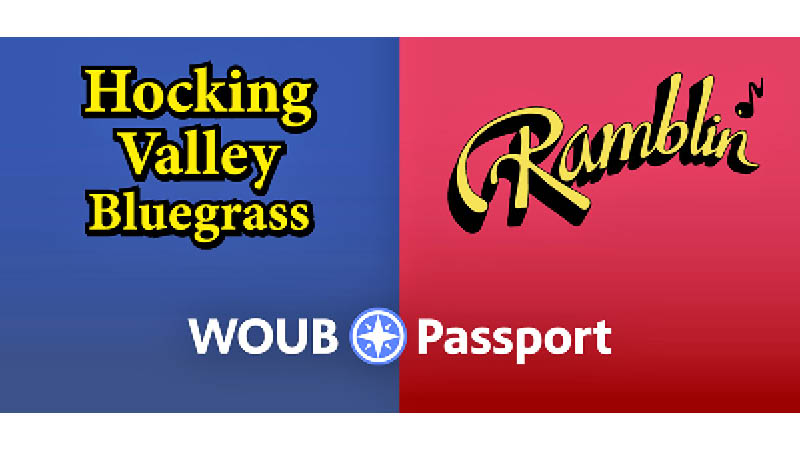 ATHENS — Episodes of two popular historic WOUB TV musical performance series are now available for streaming on WOUB Passport. Several episodes of Hocking Valley Bluegrass and Ramblin’ were recently uploaded.
“We are so excited to be able to share these programs with members on WOUB Passport,” said WOUB general manager Mark Brewer. “We know the programs mean a lot to so many people in our region because they show our musical and cultural history.”
The shows were produced in the 1970s and 80s and were originally recorded on two-inch quadruplex videotape.
They had to be digitized to be uploaded to WOUB Passport.
“The WOUB Archive Room contains a variety of media, each saved on the preferred format at the time they were recorded,” said Digital Broadcast archivist Kaycee Warren. “As time passes, viewing the oldest formats require obsolete machinery. We send these formats to be restored and digitized. The film and quad tapes are deteriorating, and we are working quickly to save the content.”
Ramblin’ was a nationally distributed series. It presented a wide variety of traditional music including Folk and Bluegrass. Each one-hour program focused on a different performer or group and showcased the most respected names in acoustic music. In addition to “live on tape” concerts, the production crew worked with each artist to create personal and introspective programs which were informative as well as highly entertaining. Episodes from three seasons of Ramblin’ that were produced between 1980 and 1982 have been uploaded to WOUB Passport and include artists like The Hotmud Family, Doc and Merle Watson and Jean Ritchie. Many of the episodes were recorded at the WOUB studios in Athens.
Hocking Valley Bluegrass was a half-hour show that highlighted regional bluegrass musicians from Ohio, Indiana, West Virginia and Kentucky. Episodes that were produced between 1975 and 1978 are available on WOUB Passport.
They feature The New Vinton County Frogwhompers, the Falls City Ramblers and The Hutchison Brothers.
“People in our region are very interested in this kind of music. Ramblin’ and Hocking Valley Bluegrass performances are not available outside of WOUB. We are working to preserve and share each episode on WOUB Passport for on-demand streaming,” said Warren.
While digitizing these programs is a tremendous first step, Warren’s work in the WOUB Archive Room is far from over.
There are many decades of programming on old tape formats to preserve.
And she says there are many times when she picks up a tape box that it’s like opening a time capsule.
“I unlock some of the tape boxes, and there are handwritten notes telling me something about what’s on that quad tape. And there are other little papers stashed inside,” said Warren. “Those who worked on these programs wanted to make sure those of us in the future knew all the information because they were proud of this work. I’m possibly the first person who has read some of these notes, and I’m honored to make sure these programs are properly preserved.”