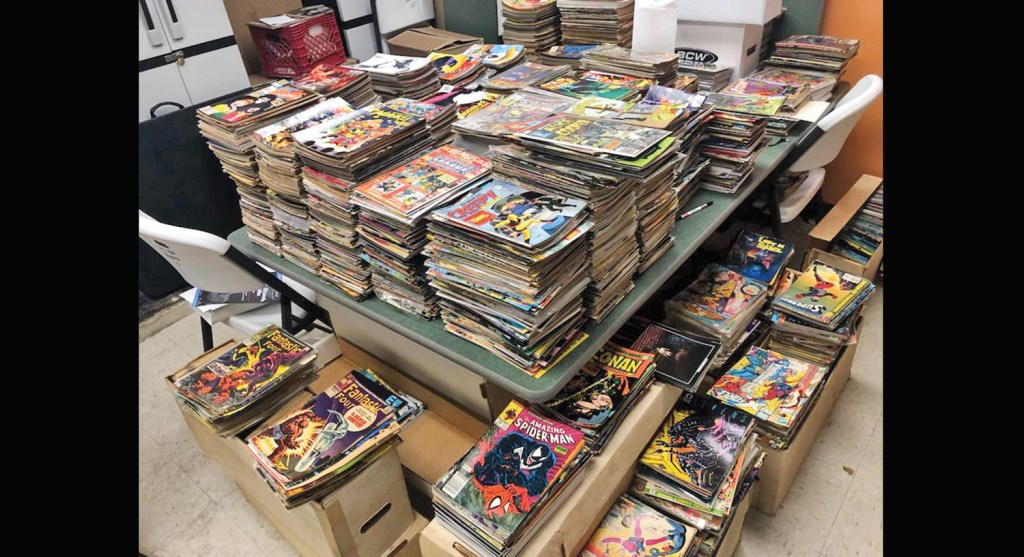 A storage locker in Ironton was broken into and a large collection of classic comic books worth thousands of dollars were stolen, and those accused of selling the comic books were arrested within two days.

The collection of comic books was stolen from a storage unit rented by Clint McElroy, who is well-known in the Tri-State for being a DJ at several radio stations from 1975 until his retirement in 2017. He is also a comic book writer. He gained wider fame when he began podcasting with his sons, Justin, Travis and Griffin in 2014.

According to a report from the Ironton Police Department, Mickey Wilson, 33, and husband and wife, Delbert, 43, and Amanda Dean, 34, were arrested Nov. 24, and charged with second-degree felony engaging in a pattern of corrupt activity and fourth-degree felony receiving stolen property for selling the comic collection.

Ironton Police detective Captain Brian Pauley said they don’t know exactly when the storage unit was broken into, but the department got a report on it on the evening of Nov. 22. He said McElroy didn’t know his storage unit had been broken into until he got a call from a friend at an Ashland, Kentucky comic book store and told him that Goblin Traders in Ironton had taken in a bunch of comics.

“That’s when he decided to go check his storage unit and found it had been broken into,” Pauley said. “It was several hundred, if not a thousand, comic books.”

Pauley went to Goblin Traders and after reviewing the comics, he was “pretty confident” that it was McElroy’s collection because “one of them actually had a note in it addressed to our victim that was still in one of the comic books.”

McElroy was called to the store and confirmed that those were his comics.

“When Goblin Traders takes something in, you have to sign a document with your name and what you brought in and how much you get for it. So, we had a pretty good lead to go on and we tracked down three people,” Pauley said.

Wilson and the Deans, who are homeless, were tracked down in a little shed on Wednesday after they were spotted by a police officer who was responding to a complaint that people were in the building without permission.

Pauley said they were brought in and interviewed separately.

“They all confessed to going and selling the comic books. No one really confessed to breaking into the storage unit,” he said.

But that information was enough for felony charges.

The trio got around $3,000 for the comics, but Pauley said the comics, some of which date back to the 60s, probably had a value as a collection in the $15,000 range, while if the comics had been sold individually could probably bring in three times as much.

The Deans rented a storage unit in the same place as McElroy and after the police got consent to search their unit, the officers found more comics and other items that belonged to McElroy.

“The storage unit of Delbert’s, we found plaques and awards that had McElroy’s name on them,” Pauley said. “There was even a picture that Tom Wopat had signed for him.”

Pauley said he doesn’t know if McElroy’s unit was a specific target or not.

“We don’t know how they knew to get into his unit,” Pauley said. “There were five or six storage units that were hit. His is the only one that we got a report on. I don’t know if they knew what was in there at the time.”

For his part, McElroy, who has been collecting comics since he was five years old, said he was happy to get his collection back.

“I’m very happy with the Ironton Police Department. They’ve done a great job,” he said. “And the guys at Goblin Traders have been terrific to work with.”

He said they are still cataloging his collection, so he doesn’t know if anything is missing. He added that it was bittersweet to get his collection back, but some personal items were destroyed during the theft.

McElroy got his start writing comics in the 80s and 90s with the “Green Hornet” series and movie adaptions of “Freejack” and “Universal Soldier” for NOW comics. He and his sons wrote a five-issue mini-series for Marvel Comics, a revival of the “Journey Into Mystery” in 2019 as part of the publisher’s larger “War of the Realms” event storyline.

The McElroys have also published their own graphic novel series based on their Adventure Zone Characters in 2018. With four volumes out so far from Macmillan Publishers, the books have been an enormous success. The first volume became the first graphic novel to reach the number one spot on The New York Times bestselling fiction list.