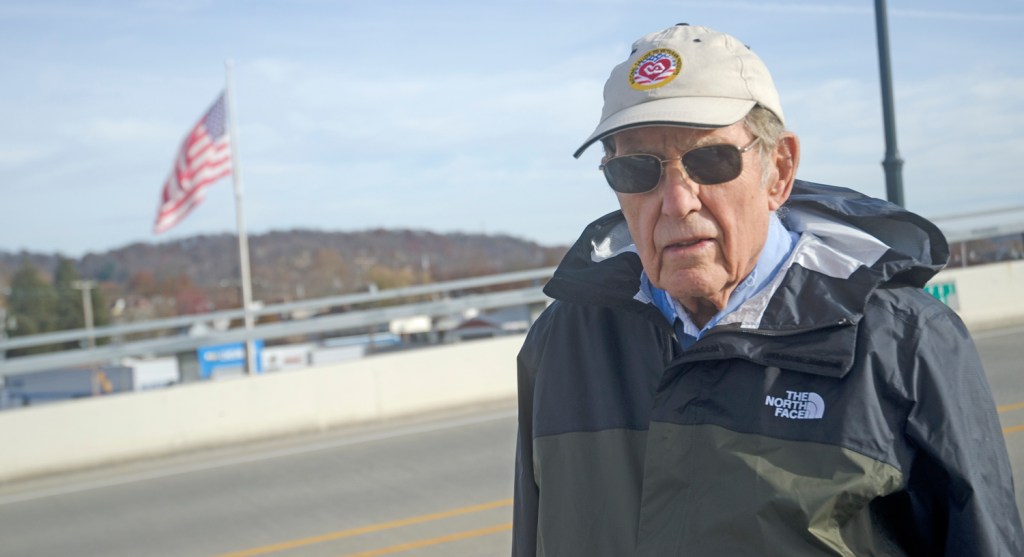 Bill Neville, 94, of South Point, walks the Oakley C. Collins Memorial Bridge each November in tribute to veterans and those who built the bridge and its predecessor. (The Ironton Tribune | Heath Harrison) 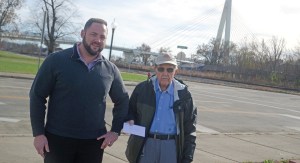 Ironton Mayor Sam Cramblit II showed up to meet with Bill Neville before his annual walk across the Oakley C. Collins Memorial Bridge on Wednesday. (The Ironton Tribune | Heath Harrison)

Last week marked five years since the closure of the old Ironton-Russell bridge and the opening of the Oakley C. Collins Memorial bridge in its place.

And it was also the start of a tradition of honor by one local man.

Each year, just before Thanksgiving, Bill Neville, of South Point, walks the length of the span, which has meaning his for family.

When his older brother Fred was an infant, he was carried across the old bridge, shortly after its opening in 1922 by their mother, Birdie Nell, and grandmother, Lucinda Blankenship.

The old bridge served the area for 94 years and when it came time for the new bridge to open in 2016, Fred was too ill to attend the ceremony.

In his place, Bill walked both the old and new spans.

“One for me and one for my brother,” he told The Ironton Tribune at the time.

Fred died at age 94 in April of 2017 in Ironton and each year since, on the anniversary of the bridge’s opening, Bill drives downtown and does his walk across the new bridge, often carrying an American flag.

Both were veterans, with Fred serving in the European Theater during World War II and Bill serving in Japan during the post-war occupation.

Bill, who turns 95 on New Year’s Eve, says he does the walk in memory of Fred and other veterans, as well as to pay tribute to the workers who built both bridges.

“I just enjoy doing it for the memory of the people who have gone before us and for the ones who did all the work letting us enjoy this,” he said.

Neville was born in Deering and is the oldest man in the congregation at Deering Missionary Baptist Church, where he serves as caretaker of its grounds, maintain a shrubbery cross that is visible from the highway.

He is retired from AK Steel/Armco and also lived in Ironton for five decades.

When he began his sixth walk last week, he was met at the foot of the bridge by that city’s mayor, Sam Cramblit II, who presented him with a letter of appreciation.

“I think it’s honorable people here make sure that those people from our community are remembered,” Cramblit said. “It’s admirable what you’re doing.”