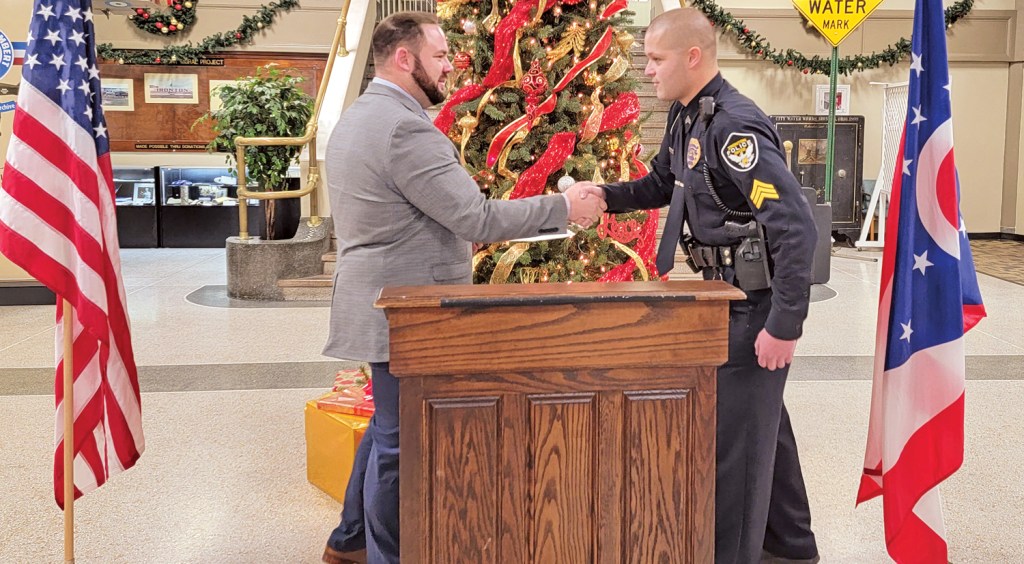 Ironton Mayor Sam Cramblit shakes the hand of newly-promoted Ironton Police Department Sgt. Evan McKnight after he is sworn in on Tuesday afternoon in the lobby of the City Center. (The Ironton Tribune | Mark Shaffer) 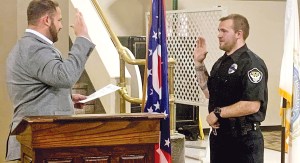 Ironton Mayor Sam Cramblit shakes the hand of newly-promoted Ironton Police Department Sgt. Evan McKnight after he is sworn in on Tuesday afternoon in the lobby of the City Center. (The Ironton Tribune | Mark Shaffer)

McKnight has been an officer since 2018

On Tuesday afternoon, the Ironton Police Department had a promotion ceremony in the City Center Lobby. Being promoted from patrolman to sergeant was Evan McKnight, who has been with the IPD since 2018.

McKnight graduated from Ironton High School in 2015 and then went to the Ohio Police Training Academy in 2017. He was a member of the Hanging Rock Police Department before joining the IPD.

“I always wanted to be a police officer for my whole life,” he said. “I am very thankful to take on this position of sergeant and further my career here.”

IPD Chief Pam Wagner said that after McKnight joined the force, he continued his training with numerous classes and had become a TAZER instructor, started the Mobile Terminal program and is the TAC for the department.

She added he worked on many major cases and assisted in the apprehension of suspects and recovery of property.

“McKnight has proven himself to be a valuable member of our department and it is with great honor we say congratulations on your promotion to sergeant,” she said.

As a sergeant, it will be his responsibility to manage the officers on the evening shift and make sure common tasks are done.

“I have a great shift, honestly,” McKnight said. He will be serving under IPD Captain Chad Gue. “He is one of the best captains we have. I am very happy to be working with him.”

Gue was promoted to captain earlier this month on Nov. 2. 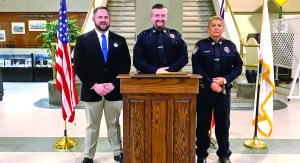 He started as a patrolman with the IPD in March 2008 and became a sergeant before being promoted to the evening shift captain.

“Chad has done many things with our department,” Wagner said. “He was at one time a detective, he is a member of our Special Response Team, he is a certified breacher and comes with a great deal of credentials. We are pretty proud of him making his way up the ranks.”

Gue said he spent five years on the evening shift and “so I guess I just fall back to where I came from.”

He grew up in Cabell County, West Virginia and “marriage brought me to Ohio,” Gue said.

He said he was happy to have McKnight as his shift’s sergeant.

“He will be the weekend shift commander when I am off,” Gue said. “I have the utmost confidence in my department. They do a top-notch job. I am very proud of Evan. He earned his way up and worked very hard to get where he is at. I trust I am leaving it in good hands when I’m not here.”

An officer who joined the IPD in August was Chance.

“He previously worked for the city in a different capacity, just not in law enforcement,” Wagner said. “He went to work with the Lawrence County Sheriff’s Office and then graduated from the Ohio Police Training Academy and came to work for us.”

With Chance Blankenship joining the force, it is the first time since at least 1996, there are two brothers working on the IPD.

“He and Brandon are the only brothers that have worked for the IPD that I am aware of,” Wagner said. “Chance has done a good job and filled some pretty big shoes of people that have retired.”