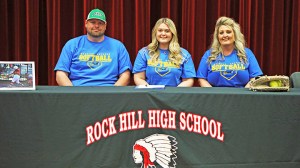 PEDRO ¬— Abby Morrison knows after graduation that she will be jumping up to the next level, but she also knows she will be helping to jump start a new women’s softball program.

This spring will be the first year for softball at Hocking College in Nelsonville and the Rock Hill Redwomen senior standout is anxious to help build the program from the ground up after signing a letter-of-intent to play for the Hawks.

“I’m looking forward to it and meeting everybody,” said Morrison. “It’s a great opportunity and it’ll be exciting to try and build a program.”

Two other schools Morrison was interested in attending were Kentucky Christian and Ohio Christian. But she said the overall atmosphere won out.

“I wanted a smaller school. I really liked the coach (Kevin Lewis) there. We kind of clicked instantly. I’ve heard a lot of good things about the team so far. I’m really excited about it. It was a really pretty place met. I met a lot of great people there. I just really like it,” said Morrison.

Morrison is known for her power and ability to drive in runs. She said that won’t change with the Hawks.

“They are definitely looking at me for my hitting. I’m not sure where they’re going to play me. I’m a little short for first base so I think they may play me at third,” said Morrison.

“I haven’t played there very  much, but I’m going to butt off to be as good as I can be when I get there.”

Morrison started playing tee ball when she was 5 and two years later began to play softball.

“I played volleyball my first year of high school but I quit because it wasn’t for me,” said Morrison.

The biggest aspect of softball that draws Morrison to the sport is the close-knit ties with her teammates.

“Every single one I’ve had has been amazing. They’re more like my sisters than my teammates,” said Morrison.

Although Morrison is headed to the college level to play, she knows there is a great challenge lying ahead besides just being part of an upstart program.

“I know I’m going to be facing a lot harder pitching. I’m looking for home runs and I want to get on the field. If they need me at third, I’m going to work and try to get better,” said Morrison.

While there have been many people who have passed through Morrison’s life and been a part of her career, she said one person stands out above the rest.

“Oh, my dad (Josh). Oh goodness. He’s coached me since tee-ball. He’s been a big part of it on and off the field. He really helps me a lot. He’s the one who gets on me, but it means a lot to me because I wouldn’t be where I am at without him.”

With the signing, Morrison has answered the question of what comes next after she graduates from high school. She said it is a bittersweet moment.

“I’m really sad that this is my senior year, but I’m really excited that I know where I’m going and I’m going to get to play at the next level,” she said.