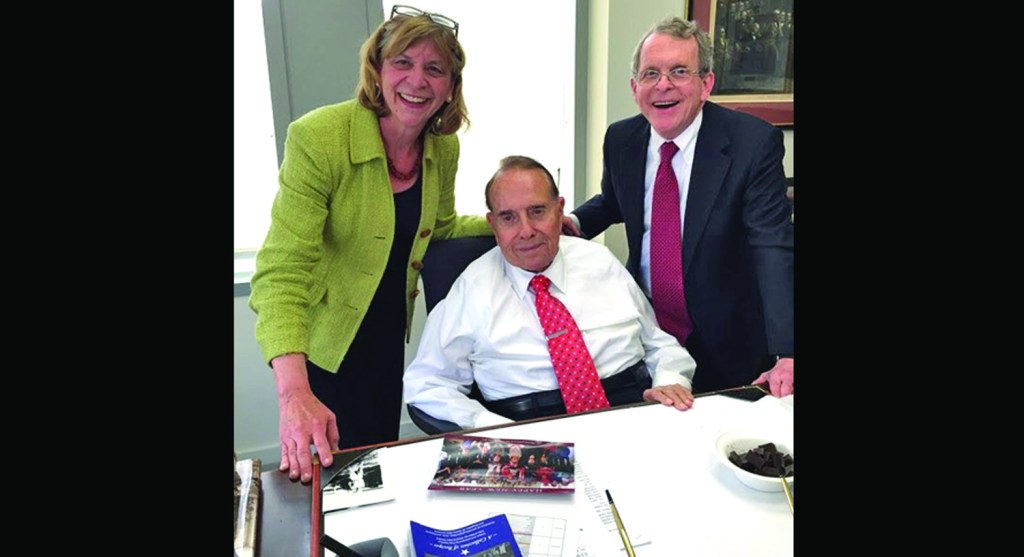 “We just heard that our friend, former U.S. Senator Bob Dole, has died,” DeWine said in a statement. “A few weeks ago, Fran and I received a surprise call from Elizabeth and him. When I entered the Senate, he was the Senate Leader. He was a courageous, tough, strong and compassionate man who loved his country deeply.”

Dole, who was the Republican Party’s presidential candidate in 1996, also ran for the office in 1980 and 1988. He was also nominated by the party for the vice-presidential position in President Gerald Ford’s unsuccessful bid for a second term in 1976. Dole was chosen by Ford to replace Vice President Nelson Rockefeller in that race.

Dole resigned from the Senate in 1996, in order to focus on his presidential campaign. He was unsuccessful in that race, with President Bill Clinton being re-elected by a sizeable majority.

DeWine spoke of Dole’s service in World War II, where he was wounded after being struck by a German shell.

“He was grievously wounded in Italy during World War II and was lucky to have survived those devastating injuries at all,” DeWine said. “He was bedridden — his body wracked by pain. He could hardly even move. But, he knew that we have to work if we’re going to succeed. And, he worked. He worked through the pain and the rebuilding — and he became one of America’s most important leaders in of the last half-century.”

DeWine also cited Dole’s service to the nation after resigning from the Senate.

“Even after he left the Senate, he never stopped working,” DeWine said. “He led the efforts to see to it that the brave men and women who fought so valiantly for our nation during WWII are honored with a national memorial. He turned the plans for that memorial into a reality. I have talked to WWII veterans who made the ‘honor flight’ to Washington to visit the memorial, who were both surprised and delighted to be greeted there by Bob Dole, himself!”

“When he was running for president, Fran and I have a very fond memory campaigning with Senator Dole and Elizabeth on the campaign bus with our young daughter Anna and the Oak Ridge Boys,” he said. “It was an amazing experience that we will never forget.”

DeWine said Dole “was all about making a difference and changing things for the better.”

“He had a ‘let’s get it done’ attitude,” DeWine said. “When we talked to him the last time, he still had that same zest for life and strong spirit that I always saw when I served with him. Today, America has lost a hero and a statesman, and Fran and I will dearly miss our friend. Bob Dole was a man of indisputable integrity, honor, and leadership, and I am proud and honored to have had the opportunity to work with and learn from this extraordinary man.”