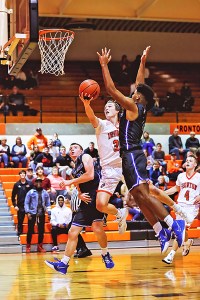 If anyone was waiting to see when Ironton coach Chris Barnes was going to call a time out and set up the final shot, they might have been disappointed.

Barnes said the final play was planned long before Tuesday’s game was ever played.

Senior Aaron Masters buried a 3-pointer with four seconds to play that gave the Fighting Tigers a 54-51 upset of the Gallipolis Blue Devils in their season opener and the first Ohio Valley Conference game for both teams.

“I wasn’t going to call a timeout there. We practice last-second shots. Aaron shot really well this summer so I had confidence in him. He had a really good game and he hit a really big shot,” said Barnes.

Masters finished with 21 points to lead Ironton. Matt Sheridan had 10 points and 5 assists while Landen Wilson also had 10 points.

Ty Perkins finished with 6 points but Barnes was more impressed with his defensive effort against 6-foot-8 Isaac Clary and Lincoln Barnes’ work against 6-6 Zane Loveday.

Barnes had Perkins fronting Clary, but the big center still scored 14 points in the first half while Loveday had 12 points including a pair of 3-pointers.

Perkins asked if he could play behind Clary in the second half and Barnes figured they had nothing to lose.

“At halftime, I told Ty to do what you got to do. He got a ton of deflections and a ton of steals,” said Barnes. “I learned to be flexible, but I’m still going to front the post most of the time.”

“Clary is a tough, hard play to stop and both he and Loveday hurt us in the first half. We changed some things at halftime and played a great third quarter defensively which go us running.”

Clary scored 8 points, Loveday 6 more and Kenyon Franklin hit a 3-pointers and scored 7 points as Gallipolis closed the first half with a 10-2 run to take a 35-26 lead.

Brayden Schreck hit a key 3-pointer and had 4 of his 5 points in the quarter.

“I told our defense we weren’t playing good enough and that’s how we were going to win the game,” Barnes said of his halftime talk.

“Lincoln played great defense on Clary and Loveday even though the boxscore for it may not show. Perkins had a better second half after we made a few changes defensively. Schreck had a good first game for a freshman and Landen hit some big shots,” said coach Barnes.

Clary had two layups and Franklin scored to tie the game at 43, but Sheridan’s layup made it 45-43 just before the end of the quarter.

Prophetically, Masters hit a 3-pointer to begin the fourth quarter and it was 48-43.

Carson Call and Loveday each made two foul shots to tie the game at 51 with 50 seconds to play and Ironton then elected to play for the final shot and Masters ended the quarter the way he began it.

Barnes said the players’ defense impressed him, especially against a team like Gallipolis.

“Gallipolis has a really good team. To hold them to 16 points in the second half was a fantastic team effort,” he said.

Clary finished with a game-high 24 points while Loveday had 14 and Franklin 9.