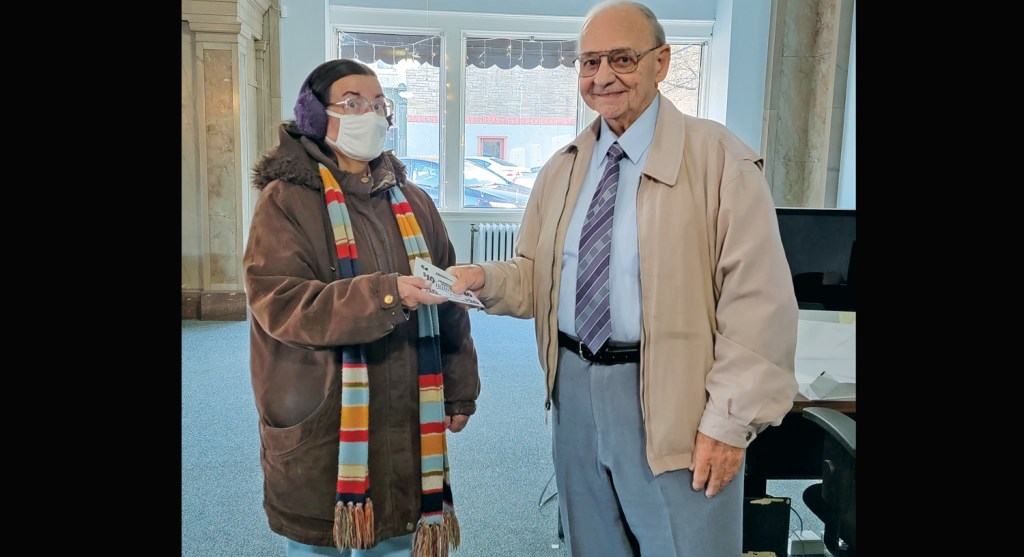 Sam Heighton, executive director of Ironton aLive, right, presents $200 in Ironton Bucks to Sharon Mays, of Ironton, on Monday afternoon. She was the second-place winner of a contest that was held as part of downtown Ironton’s Small Business Saturday on Nov. 27. (The Ironton Tribune | Mark Shaffer)

The winners of the Small Business Saturday’s Ironton Bucks contest were announced on Monday and three people won four prizes.

Sam Heighton, executive director of Ironton aLive, explained that they have had the chance to win Ironton Bucks on Small Business Saturday for the past six or seven years as a way to encourage people to shop at locally-owned businesses.

“Everybody that shops on Small Business Saturday receives what we call a passport which has the names of all the businesses that are having specials. As people go to all those places, the business people sign that they’ve been there,”

Heighton explained. “So, once the people get 10 places on the passport, they turn it back in to us and then we had a drawing a couple of days ago and Lois Terkhorn, Sharon Mays and Felicity Jenkins won the money.”

The elf scavenger hunt was a little tougher.

“Ginger Gillenwater and her three little elves went around to participating businesses and hid the elf,” Heighton said. “When a person spotted the elf, they filled out a slip and we had a drawing on that and Felicity Jenkins won that.”

Ironton bucks can only be spent at the 38 Ironton businesses that participated in the event.

“So, it all has to be spent here in Ironton,” Heighton said. “It works very well.”

He said one year, Ironton aLive was at a trade show and gave away gift baskets which contained Ironton Bucks. Heighton marked those bucks and found that several people traveled to Ironton just to spend those bucks.

“So, we knew the program was working,” he said.

He added that people can buy Ironton Bucks from Ironton aLive if they want to give them out as Christmas gifts and help support the local economy.

“It’s a good way for people to be introduced to local businesses that they might not ordinarily go to,” Heighton said. “It gets them in the door.”