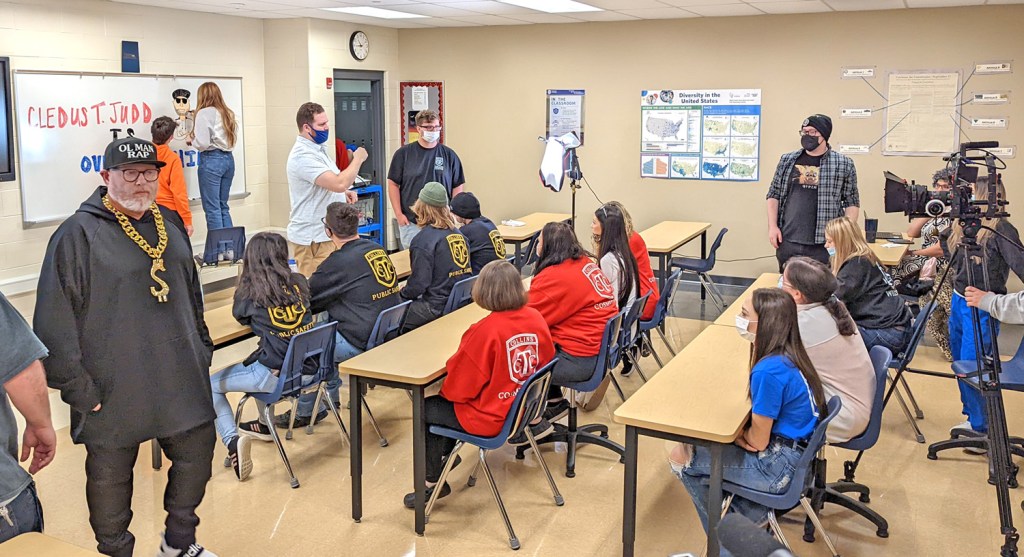 GETAWAY — Nearly 100 students at Collins Career Technical Center got a chance this month to see and take part in all of the aspects of creating a music video.

Cledus T. Judd enlisted the school for the filming of “Old Man Rap,” a shoot that took place over three days and included multiple programs at the school.

Judd decided to involve the school, following a visit to the campus.

“He came out to do an assembly on drug-free living,” James Woda, technical academy supervisor for CCTC, said.
Woda said the premise for the video is that Judd is a substitute teacher at the vocational school and that he raps about ailments and other issues of growing older.

Judd, the stage name of James Barry Poole, 56, is a country parody artist and Georgia native, best known for his 1996 album, “I Stoled This Record,” which was certified gold.

Since 2012, he has been a radio personality on WTCR-FM in Huntington, having moved to the city to be closer to his daughter.

Directed by Caleb Jones, of mass media engineering, the video was primarily a project of that program, with students taking part in pre-production, principal photography and post-production.

And we had a few labs involved, too,” Woda said. “Machining and robotics built a putting green and a windmill.”

He said cosmetology students handled makeup, culinary arts was in charge of craft services, auto collision worked on props and set design, public safety handled security on the set and many students also served as extras in the video.

After three days of shoots, Woda said all photography is done.

“Now, everybody, including staff, are taking a crack at the editing and we have until before Christmas to send it off,” he said.