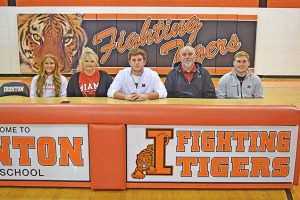 If anything, Ashton Duncan is a man of his word.

The Ironton Fighting Tigers’ senior All-Ohio defensive end, fullback and tight end made it official on Wednesday as he signed a national letter-of-intent with the Miami Redhawks after giving them a verbal commitment this past summer.

Having played three different position and capable of playing linebacker as well made Duncan a very enticing commodity to the Redhawks coaching staff.

“They are looking at me for tight end and fullback, too, so basically blocking,” said Duncan. “But you never know, they might switch me to defensive end. You never know. But tight end is what I’m planning to play and practice. It doesn’t matter to me.”

And if given the choice, Duncan said he does have a preference.

“It really doesn’t matter. I just want to help the team. But if I can, then tight end. I love to block and catch passes. That’s what I like to do,” said Duncan.

Duncan lettered all four seasons for Ironton and was a three-year starter. He was first team All-Southeast District and third team All-Ohio this year.

The 6-foot-3, 245-pounder said he gives a lot of credit to his head coach Trevon Pendleton.

“When I came in as a freshman, I didn’t know what to expect. He’s kind of the person who changed me, to become the person I am and to love football. He’s definitely changed my last four years in high school,” said Duncan.

Duncan had other offers including Marshall and Ohio University, but he said he realized Miami was the best choice after his visit.

“They were nothing like Miami,” said Duncan. “As soon as I got there, I knew it was the place to be so that’s why I chose it.”

Although it has been four very successful seasons with three Ohio Valley Conference titles and two Division 5 state runners-up, Duncan’s senior season was plagued by back trouble that forced him to miss several games.

He admits that sitting and watching were very difficult for him.

“It’s been tough. It’s been a long journey, but to get through what I went through, and just persevere, made be stronger. It was hard,” said Duncan.

“But it’s been great to have been part of two championship teams here.”

Being a freshman next fall, Duncan knows he has a lot to learn and will find himself at the bottom of the depth chart and trying to work his way into some playing time. He said he has several goals that include becoming a starter.

“I just want to graduate and if it’s possible, I do want to go to the league (NFL). But if that doesn’t happen, just graduate. I just want to know that I did my best and worked hard,” he said.

Duncan plans a major in Business at Miami which is known as an excellent academic school.