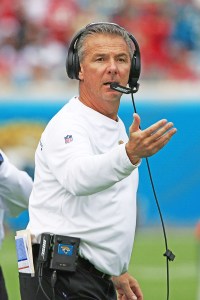 JACKSONVILLE, Fla. (AP) — Urban Meyer’s tumultuous NFL tenure ended after just 13 games — and two victories — when the Jacksonville Jaguars fired him early Thursday because of an accumulation of missteps.

Owner Shad Khan made the move hours after former Jaguars player Josh Lambo told a Florida newspaper Meyer kicked him during practice in August. It was the latest black eye — adding to an already lengthy list of embarrassments — for the three-time national championship-winning college coach who failed miserably to make the transition to the NFL.

Meyer joins former Atlanta Falcons coach Bobby Petrino as college coaches whose NFL careers flamed out in stunningly swift fashion. Petrino resigned in December 2007 to take over at Arkansas. He was 3-10 at the time.

Meyer went 2-11 in his partial season, and the Jaguars really started to unravel on the offensive side of the ball following the team’s bye week. They averaged a measly 9.1 points in Meyer’s final seven games, which ended with a five-game skid.

“After deliberation over many weeks and a thorough analysis of the entirety of Urban’s tenure with our team, I am bitterly disappointed to arrive at the conclusion that an immediate change is imperative for everyone,” Khan said in a statement. “I informed Urban of the change this evening. As I stated in October, regaining our trust and respect was essential. Regrettably, it did not happen.”

Meyer’s biggest issues came off the field, where he tried to handle a professional team like he was on a college campus. He splashed slogans and catchphrases around the facility, instilled gimmicks in practice and repeated his misguided belief that coaches coach for players and players play for coaches. He brought in motivational speakers and kept blaming assistants for the team’s mounting losses instead of the grown men actually on the field.

One of Meyer’s most damning decisions came following a Thursday night game at Cincinnati in late September. He chose to stay behind with family instead of flying home with his team and then got caught on video the following night behaving inappropriately with a woman at a bar in Columbus, Ohio. Khan publicly reprimanded Meyer then, saying he needed to regain the owner’s trust and respect.

Meyer simply never made the proper adjustments to the pro level.

Lambo’s claim seemingly proved too much for Khan, who two days earlier said he didn’t want to make an impulsive decision on the coach’s future.

“What’s different about this thing is you have losses and you have drama,” Khan said then.

The Jags had way more drama than victories.

Lambo provided the latest when he told the Tampa Bay Times that Meyer kicked him while he was stretching at the start of a practice. Lambo, the team’s place-kicker to open the season, said he told Meyer “don’t you ever (expletive) kick me again” and said the coach responded, “I’m the head ball coach, I’ll kick you whenever the (expletive) I want.”

Meyer released a statement through the team denying the incident happened the way Lambo described it.

“Josh’s characterization of me and this incident is completely inaccurate, and there are eyewitnesses to refute his account,” Meyer said.

Lambo said he reported the kick to his agent, who contacted the Jaguars’ legal counsel the following day.

“Jaguars legal counsel indeed acknowledged and responded immediately to the query made by Josh Lambo’s agent Friday, August 27, 2021,” the Jaguars said in a statement. “Counsel offered to speak with Josh, or to assist Josh in speaking with coaching or any other football personnel, if he was comfortable with her sharing the information. Any suggestion otherwise is blatantly false.”

Lambo was released after he missed his first three field-goal attempts to start the season.

Lambo’s allegation came on the heels of an NFL Network report which said Meyer created tension with multiple run-ins with players as well as assistants he allegedly called “losers.” Citing unidentified sources, the report detailed a heated exchange between Meyer and veteran receiver Marvin Jones that stemmed from Meyer criticizing receivers by saying they weren’t winning enough one-on-one matchups or getting enough separation.

“I would just say this: There was something that was brought to my attention that I didn’t like too well,” Jones said Wednesday, his first public comments since the report was published Saturday. “I approached him about it and we talked and we handled it like grown men. And that’s all I have to say about that.”

Jones denied threatening to leave practice over the argument.

“I mean, shoot, when you lose, you’re always going to be the center of attention in a negative way,” Jones said. “That just is what it is. That’s all I have to say.”

Other issues for Meyer:

— He hired strength coach Chris Doyle in February despite accusations of racist behavior and then had to let him go a day later because of a pending lawsuit.

— Jacksonville was fined $200,000 and Meyer docked $100,000 on July 1, a punishment that stemmed from an early June practice in which the league deemed receivers and defensive backs had too much contact during 11-on-11 drills.

— He repeatedly mishandled running back James Robinson, allowing the team’s most consistent offensive player to get benched twice following fumbles and botched trying to explain why Robinson got pulled and how long he remained on the sideline.

All the drama became too much for Lawrence.

“I do think that has to change and that’s something that we need to work on for sure,” Lawrence said Wednesday. “You can’t always be in the headlines. You just got to go play football, and that’s where we’re trying to get, and I have no doubt we’ll get there.”