Washington gets huge opportunity with Kentucky 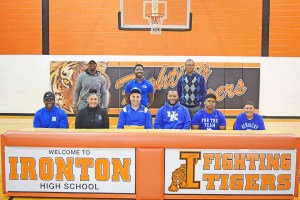 He rips it off the hinges.

The Ironton Fighting Tigers’ senior linebacker keeps having different opportunities come up in his life and he responds each time. And he is rewarded for answering those calls by signing a national letter-of-intent with the Kentucky Wildcats on Wednesday during the start of the early signing day.

“When I took that visit to UK, I was like, ‘yeah, this is home right here,’” said Washington with a grin.

Nothing is guaranteed when becoming part of a college program whether the player is on an athletic scholarship or not. Washington knows the risks but is up to the challenge.

“It’s an opportunity for a scholarship, so I’m determined to get that scholarship,” said Washington.

The 6-foot-1, 225-pounder was a first team All-Southeast District selection and shared the Defensive Player of the Year with teammate Nate Cochran.

He then capped his stellar season by earning first team All-Ohio honors on the Ohio Prep Sports Writers team.

Washington is excited to become part of the Wildcats’ program that posted a 9-3 record this past season including wins over Florida and LSU.

“It’s on the up and up. They took a big step this year and I’m about to be part of the process,” said Washington.

There are plenty of linebackers returning this season for Kentucky but Washington is undeterred.

“I’ll be more of a linebacker. They have a good bit (of linebackers), but I’m going to stand out,” Washington said. “I just need to continue to work hard and I’ll get it.”

“I want to go there and compete for a spot. Now, whether it’s on defense or special teams, that’s my goal.”

Washington’s uncle Curtis Keyes was an All-Conference USA safety. His family’s connection with his uncle was part of moving from Mississippi to Ironton where he began playing as a sophomore.

“It’s one of the best things in my life coming up here. It’s given me this great opportunity,” he said. “It was God’s plan. I got here and just did what I needed to do. I had a great supporting cast and with my family, my friends and my coaches it worked out.”

Ironically, Washington said he met Ironton’s Ashton Duncan who signed with the Miami Redhawks on Wednesday.

“I didn’t know too many people. I hadn’t been to Ironton, but I had been around the area. I talked to Ashton (Duncan). He was actually the first person I talked to. It was kind of cool. It was different, but it was nice. It was good,” he said.

Washington plans to major in Kinesiology.