The gift of giving (WITH GALLERY)

She was one of those from four student groups at the high school taking part in the annual Christmas Project for students in the district in need. 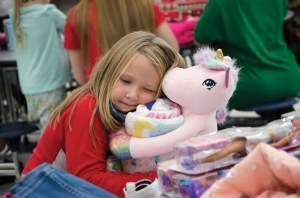 Tori Slaughter hugs a plush unicorn she received as part of the annual South Point High School Christmas Project on Wednesday. Students from the high school purchased gifts for 14 students at Burlington and 14 from South Point Elementary School. (The Ironton Tribune | Heath Harrison)

It was Scott’s second year with the effort, and she was paired with a student from South Point Elementary School.

“This is a way to give back to the community,” she said of watching the children open the purchased gifts.

Using funds the student groups raised, they purchased items for the children, 14 from Burlington Elementary and 14 from South Point Elementary, wrapped them and presented them at an event in the schools.

The South Point event took place in the morning, and, that afternoon at Burlington, students were taken to the cafeteria for the surprise. 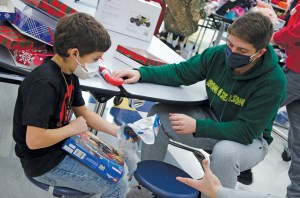 They came from all ages, with the youngest, from the kindergarten, dressed in pajamas as part of a classroom theme day, fitting for an early version of Christmas morning.

When introduced to Santa Claus, Mrs. Claus and elves, they were told they would be getting presents, prompting cheers.

Each child’s name was read out and the high school student they were assigned to came forward and brought them a bag filled with gifts.

Typically, the Christmas Project involves also taking the children out to eat, as a well as a party, but, for the past two years, it has been held in a socially distanced manner at the schools, due to the COVID-19 pandemic.

It is the 18th year for the project, history teacher Kent Stewart, who has helmed it for the past 15 years, said.

Students are recommended by teachers, who feel they could use some extra help for the holidays.

Support for the program came from Cindy Chinn of Big Sandy Superstore, Rack Room Shoes, of Ashland, Kentucky, and United Way of the River Cities, from which the project received a $2,000 Big Cover Up grant this year.

The project also received the match-based grant from United Way in 2020.

Stewart said the funds raised were used to purchase new clothes, new coats, new shoes and toys for the children.

Senior Andrea Lycans was taking part in the project for the first time.

She said she was recommended through the GSA.

“It was great, and I was excited but nervous,” she said of getting the items for the students she was assigned to. “I got a wish list and a wish list of absolute needs,” she said.

“It was amazing to see the smiles on the kids,” Pegram, a member of Ro Kappa and Mu Theta, said.

“Just to see him so happy and get gifts and clothes, I couldn’t ask for better,” he said of Fletcher. “It was better than having Christmas on my own.”

Scott, a member of Ro Kappa and student council, was partnered with a boy at South Point’s earlier party.

She said it “breaks my heart” to see the children excited for all of the gifts, even smaller items like socks.

“There are so many ungrateful people,” she said, choking up. “And this makes a big difference for little kids.”

Brown calls for voter reform during remarks at MLK celebrations

Semi gets stuck on railroad crossing in Ironton