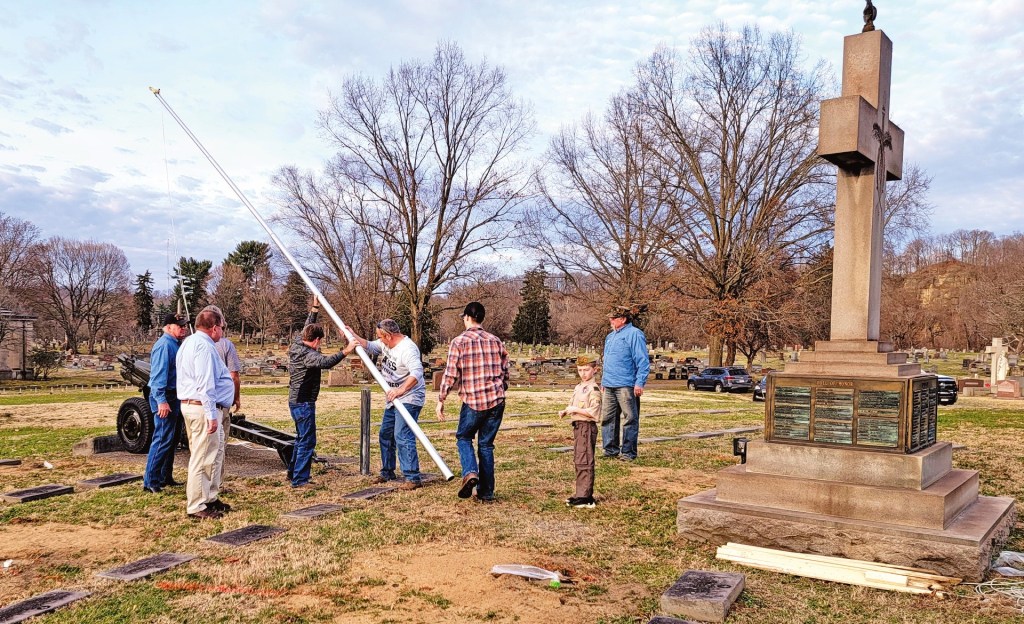 Aaron Heighton and Tim Carpenter raise one of seven flag poles at Woodlawn Cemetery in Ironton that are a part of a project by Matthew Heighton to obtain the rank of Eagle Scout. (The Ironton Tribune | Mark Shaffer)

On Wednesday afternoon, Matthew Heighton and his father, Aaron, were in the Woodlawn Cemetery Soldiers Circle to honor, not just one veteran buried there, but all of them by putting up seven flag poles. One will fly the American flag and the other six will the flags of the six branches of the military.

Matthew Heighton, 16, is a junior at St. Joseph High School and is a Life Scout with Troop 106 in Ironton. As part of his path to become an Eagle Scout, he had to come up with a service project and then see it through to completion. He knew he wanted to do something to honor the military or veterans.

“It is something that has always hit deep in my heart,” Matthew Heighton said.

In August, he saw an article in The Ironton Tribune about improvements being made at the veterans plot and read that Lawrence County Veterans Services officer Tim Carpenter mentioned among the future improvements that he would like to see at the cemetery was more flag poles, so all branches of the military represented.

“So, I contacted Tim and got together with him and had multiple meetings planning this out. And that led us to where we are today,” Matthew Heighton said.

Among the things he had to do was raise money to buy the flags and the poles.

“This was done with support from the community,” Matthew Heighton said. “Mainly from politicians, the commissioners, family members.”

Aaron Heighton was helping his son put together the flag poles, which came from a veteran-owned company called Service First.

He too was a Life Scout.

“Matthew and I talked a long time about he wanted to do,” he said. “While this isn’t difficult to do, it is a lot to do, but talking with Tim and what he wanted to do for the veterans, living and deceased, this is just an awesome project for him to be able to do for everybody. The fact that it benefits our veterans, it benefits our community— that is what this is all about.”

Scott Evans, a retired U.S. Army lieutenant colonel and one of the members of the Lawrence County Veterans Commission, said the commission was thrilled by the project.

“The entire commission was very excited that Matthew chose a patriotic project of this sort as his Eagle Scout project,” he said. “This will be a lasting monument at Woodland Cemetery for many years to come.”

Matthew Heighton said he has considered joining the military and has thought about joining ROTC or the reserves.

He added that the plan was to get everything installed and ready for the Wreaths Across America ceremony which will be held today at noon in the veterans plot.