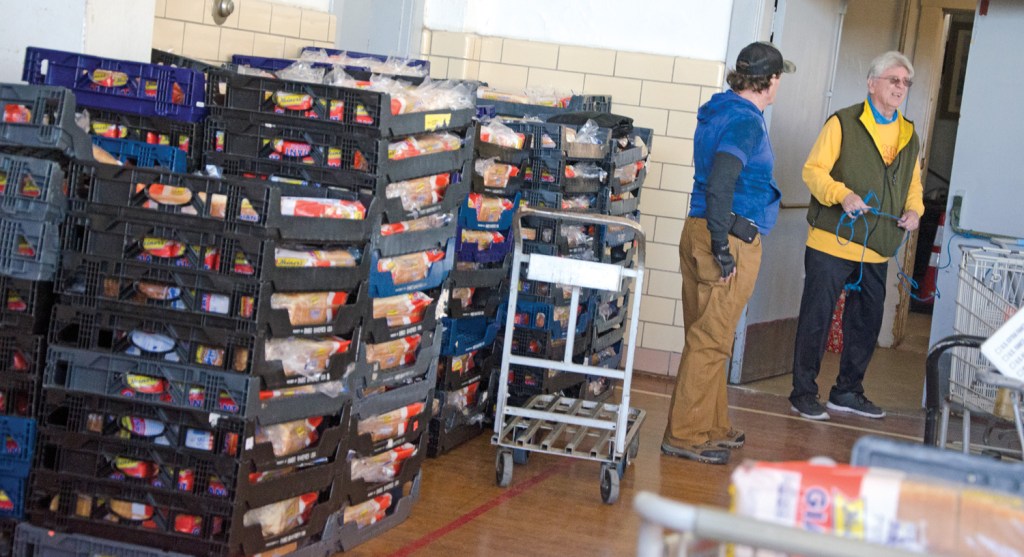 Danny Newman, financial secretary for Chesapeake Community Mission Outreach, locks up the doors to the gymnasium at the village’s community center on Monday, after the room was fully stocked in preparation for the next day’s annual food giveaway. (The Ironton Tribune | Heath Harrison) 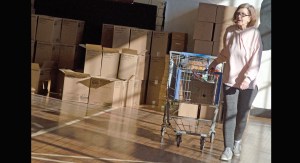 Volunteers load carts with items on Monday in preparation for the annual food giveaway by Chesapeake Community Mission Outreach at the village’s community center on Tuesday. (The Ironton Tribune | Heath Harrison)

CHESAPEAKE — After a long day of preparation, members of Chesapeake Community Mission Outreach locked up the gym at the village’s community center on Monday, with the room filled from one end to the other with boxes and bags of food items.

It was all in preparation for the next day’s annual Christmas food giveaway, in which cars would drive around to the building and volunteers would fill carts with the items, enough to prepare a proper Christmas meal, to those in need.

“We’ll have 400 at least tomorrow,” Bill Booth, the chair of the CMO’s board said of those who had pre-registered.

Those who signed up met low income requirements, with many also taking part in CMO’s regular monthly food distribution events.

Booth said there would also be a smaller giveaway on Wedneday for those who signed up at the last minute.

The event has been ongoing for more than three decades and Booth says he has worked it for at least 20 years.

Looking over the carts, a few of which were already full with items for the first cars to roll in on Tuesday, he named off the items that will be given to each family.

And those were just the items he remembered off the top of his head.

“We have a big day tomorrow,” Danny Newman, financial secretary for CMO, told the room.

Newman said, altogether, there would be about 50 volunteers assisting in the effort, including regular CMO participants, students from Chesapeake High School and Chesapeake Middle School, and individuals from local recovery groups.

“It’s about the same as last year,” Newman said of the demand and registrations they had seen for 2021.

In addition to the food distribution, the CMO also hosts a toy room, where families can obtain new items for children.

The CMO, founded in 1985, gets grant funding for the giveaway, as well as funding from local churches.