The Bella of the (Basket) Ball: Whaley adds 1,000 career points to her Lady Flyers milestones 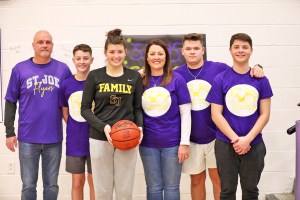 St. Joseph Lady Flyers’ senior basketball standout Bella Whaley reached a milestone on Saturday with 1,000 career points. Whaley was presented with the game ball and was joined in the postgame celebration with her family, from left to right, father Andy, brother Eli, Bella, mother M’lissa and brothers Isaac and Ian. (Photo By Tim Gearhart)

With 1:36 left in Saturday’s game against Lucasville Valley in the consolation game of the Flyers Holiday Tournament, Bella Whaley was fouled shooting a 3-point goal and went to the foul line with free throw three attempts.

Whaley needed to make just two free throws to give her 1,000 career points. But in typical Bella Whaley style, she easily made all three.

It was another milestone in the career of the St. Joseph Lady Flyers senior standout.

“Going into this game I was fine, but the more I was out there I felt more pressure,” said Whaley. “But I’m really glad it’s over.”

The 1,000 career points is impressive but she also has more than 700 rebounds and should surpass 800 and make a run at 900 before the end of her senior season.

Those numbers are impressive as they stand alone, but Whaley has accomplished the feat playing in a high school that has just 17 girls.

“Bella scores the points, she’s the best rebounder, she handles the ball, she plays defense, she’s a leader, she just does it all,” said Burcham.

“I’ve coached through Brigham Waginger, Dennis Gagai, Josh Sands, Zac Carter, Trey Fletcher and others, and she works as hard if not harder than any of them. She’s the only one I’ve had consistently stay and shoot 20, 25 minutes after every practice. And she’s probably the one who doesn’t need it the most but she does it.”

Whaley – who is also an outstanding soccer player – said scoring 1,000 points was an early goal she set for herself.

“I just always wanted to score a thousand points since I was a freshman and I just strived to do that. Rebounding just kind of happened. I didn’t plan for that, but I’m glad I did that, too,” said.

Whaley said she gets her motivation from her teammates and the people around her.

“I like having my teammates supporting me and cheering me on as well as and the fans and the coaches and just the environment all together,” said Whaley.

Burcham said that the environment Whaley likes to live in isn’t a one-way street. He said Whaley does more than her fair share to create a similar environment for her teammates.

“I tell the girls all the time that I want them to be supportive of each other and she is the first one whether is practice or a game or whatever to pat them on the back when they do something good,” said Burcham.

St. Joseph has a very young team this season which has not only put a lot of the burden on her, but it has made her the target of opposing team defenses. It’s not unusual for her to face double teams each time she steps on the court.

And yet she takes it all in stride.

“I thought about that. I thought they’d probably put more pressure on me, but at the same time I knew I was kind of close (to 1,000 points) so I didn’t put too much pressure on myself,” said Whaley.

Burcham said he’ll be lost next year after having the pleasure of coaching Whaley the past four seasons.

“She is the best role model anyone could have as a kid or as a person. I keep saying kid because we’re old and she’s young. But she’s a young lady now. I said this about Faith (Mahlmeister) a couple of years ago, if I had a kid, I’d want her to be like Bella. That’s just the biggest compliment I can give her,” said Burcham.

“There’s nothing I wouldn’t do for her. If she was to ask me tomorrow or 20 years from now for something, I’d do it for her in a second.”

And as for Whaley, she merely just looks forward to the next game and the next challenge.

“Rebounds are the only other goal I have. That and winning our tournament game,” said Whaley.

Just another milestone to go with the rest.