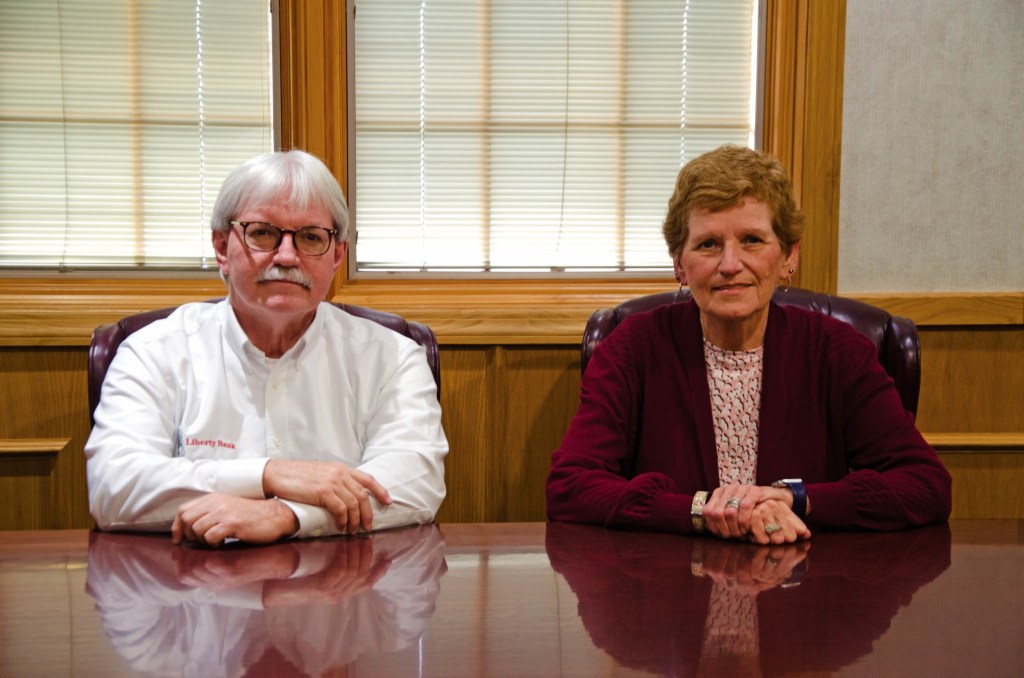 Liberty Bank president Randy Mays and vice president Mary Roush will retire at the end of next week. Mays has worked at the bank, located in Ironton, for 21 years and Roush has been there for 51 and a half years. (The Ironton Tribune | Heath Harrison)

For customers at Liberty Bank in Ironton, Randy Mays and Mary Roush have been familiar faces to them for many years, but, when the bank closes at noon next week on New Year’s Eve, the two will be saying good bye and starting their retirement.

Mays has worked at the bank for 21 years, first hired in as a service lending officer, then becoming president in 2016.

Roush, the bank’s vice president, has worked there for 51 ½ years, nearly half of its 125-year history.

“They hired me originally in 1970 to type 1099 forms,” she said of her start, from which she worked her way up. “I’ve been a bank teller and a loan officer. I do retirement accounts now.”

The only locally-owned bank in Lawrence County, Liberty Bank has a main location at 214 Park Ave. and a branch in Proctorville.

The bank was originally located across the street, but moved to its current location in the 1970s.

Roush said she remembers four modular units being brought in to form the building.

“They stored them on Fourth Street,” she said, noting that that they had to wait until Zimmerman’s, a gas station that stood at the current site, was demolished.

Once those units were assembled, the steel inside was later removed, opening up the building to its current form, she said.

Roush said, when she began in 1970, she was amazed at the number of people from that time who were unable to sign forms.

“You had to have a witness,” she said.

May said what he will miss most is “helping the people and the community.”

“I like to go out and see things we participated in,” he said. “Houses that were built and things from construction loans.”

Roush agrees with him on this.

They said they are proud that Liberty Bank is still locally owned and point out that loans stay in the community and are not sold out.

“Everything is kept here,” Mays said.

Roush said that, over the years, she has seen multiple generations come through as customers.

“We had the grand parents come in and we’re now making loans to their grandchildren,” she said.

And Mays said co-workers have seen generations of each other’s families over the years.

“They’ve seen my kids grow and we’ve seen each other’s grandkids and families grow,” he said. “It’s been a good place to work.”

“And, if you enjoy your co-workers, the job is easy,” Roush said. “It’s like a family.”

Of Roush, Mays said her knowledge of the “trivia” of the business has been indispensible.

“If we need something, she always knows where it’s at,” he said.

Roush returned the compliment to him.

“Randy is such an easy person to work with,” she said. “He’s such a good boss and easy to work for.”

For Roush, who has worked since she was 13, the week after next “is going to be a big adjustment,” she said.

“I have a grandson in Cleveland and hope to see him more often,” she said of her retirement plans.

“And do some home remodeling,” he said.

As he prepares to wind down his banking career, Mays said he was appreciative of the support they have received over the years.

Mays will be succeeded by Rhonda Harrison as president in 2022, while Jennifer Creger will become vice president.

Grant award to be used for nursing scholarships