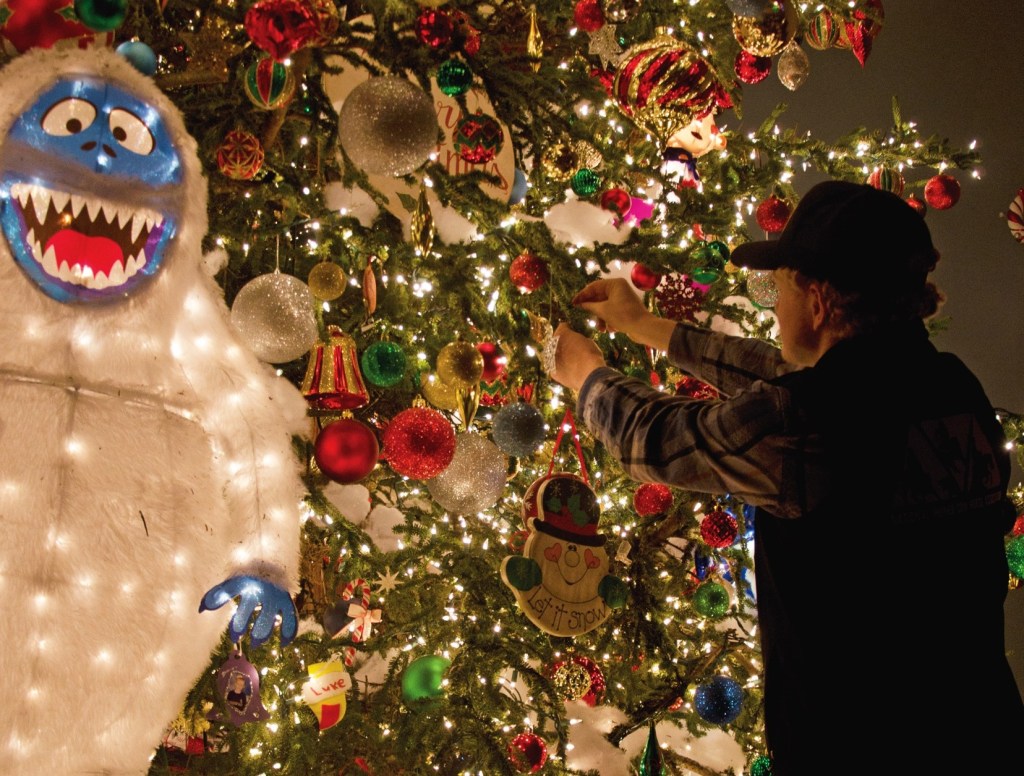 COAL GROVE — “The biggest job is finding one,” Denise Paulus says of her family’s Christmas tree, which measures 30 feet tall. “Every year, in November, the hunt is on.”

The tree, which takes up two stories inside of their Coal Grove home, is part of a 25-year tradition for the family. 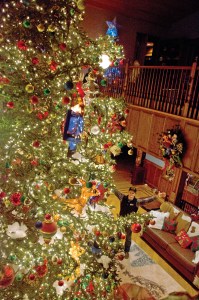 Luke Paulus stands on Friday to show the scale of his family’s 30-foot tall Christmas tree. His mother, Denise Paulus, has been putting up trees of that size in their Coal Grove home for 25 years. (The Ironton Tribune | Heath Harrison)

“Not a lot of tree farms want to grow them this big,” Denise, who serves on Coal Grove Village Council and is the director of the Lawrence County Animal Shelter, said.

For this year’s tree, a Douglas fir, they found a tree farm in Dennis, West Virginia, located in Greenbrier County in the eastern part of the state, and had it shipped to them.

Once the tree is brought into the home through a set of double doors, decorating it is a challenge.

“We use two ladders, mounted to the ceiling, with a board in between them,” her son, Luke, said.

He said they have tried other methods, such as a scissor lift.

“And we used scaffolding one year,” Denise said.

Situated by a large set of windows, the tree is visible from the U.S. 52 exit, about a mile away, Denise said.

And, if you look closely, it can be spotted from across the Ohio River, in Kentucky.

“You can see it from the Ashland Walmart,” Luke said.

The tree uses so many lights, Denise said they had to rewire their electrical outlets to handle the burden.

Among the decorations are many large characters, such as Yukon Cornelius, Herbie the elf, King Moonracer and residents of the Island of Misfit Toys from the 1964 Rankin Bass “Rudolph the Red-Nosed Reindeer” television special.

“I like collecting Misfits,” Denise said. “And they’re big.” 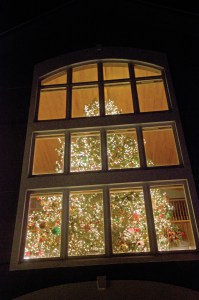 The Paulus family’s 30-foot tall Christmas tree is large and bright enough to see from U.S. 52, as well as across the Ohio River from the Ashland Walmart lot. (The Ironton Tribune | Heath Harrison)

They have several themes they use, alternating them from year to year, and Luke points out that, among the large decorations, his mother also hangs those her children made in elementary school. 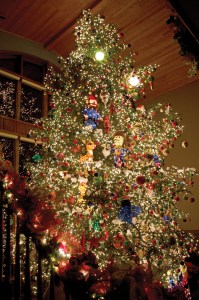 The Paulus family’s 30-foot tall Christmas tree extends to the second floor of the home and requires multiple ladders to decorate. (The Ironton Tribune | Heath Harrison)

As for how long the family keeps the tree up, Luke says, “until the needles fall off.”

He said, once that begins, it makes a distinctive sound.

“It gets to the point where it sounds like it’s raining in here,” he said.

He said maintenance of the tree and making it last is a lot of work, with it needing water every day.

As of Christmas Eve, he said the tree was “consistently drinking water,” a good sign that it will last a while.

Once it finally comes down, he said they make full use of it, using it for firewood and letting their mule and donkey enjoy the rest.

After two and a half decades of hosting the large trees, Denise said she is retiring from it, stating she’s spent too much time on a ladder.

But Luke appeared skeptical, and time will tell if this is so.

“Every year, she always says it’s going to be the last one,” he said with a laugh.