HISTORY LESSON: December 1773 – Boston Tea Party is a prelude to the revolution 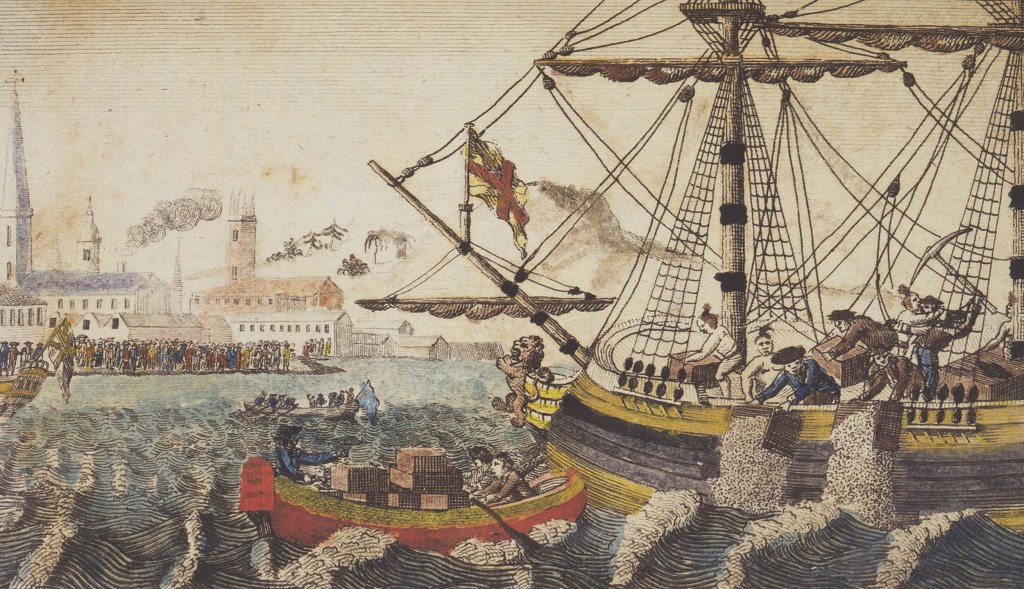 “Americans Throwing the Cargoes of the Tea Ships into the River, 1773,” an engraving from 1789 by W.D. Cooper. (Library of Congress photo)

With the founding of English Jamestown (1607), French Quebec (1608) and Spanish Santa Fe (1609), it appeared that North America was large enough to house many European settlements.

However, the three aforementioned nations had visions and designs of empire building. Four wars would be fought between 1689 and 1763 to determine who would control North America.

The last of these “Colonial Wars” was called the French and Indian War. It began near Uniontown, Pennsylvania and officially ended with the Treaty of Paris in 1763. This war was a world war and fighting was seen in Europe, Asia, Africa and the Americas. This war ended in triumph for Great Britain, but, within a few years, it was apparent that the real losers in North America were the Native American allies of the French and English.

It was quite apparent that the English colonies, from Maine to Georgia, could not adequately defend themselves from the French, Spanish and Indian raids. The British army and navy turned the tide in North America.

However, the years 1754-1763 proved to be quite costly for England. Since the British army and navy defeated the Spanish and French, British politicians and certain members of Parliament felt the 13 English colonies should contribute funds toward the national debt.

The British Empire also wanted to end smuggling in North America. English colonists would protest Parliament’s taxation with the cry, “No taxation without representation!” Colonial discontent would eventually lead to the Revolutionary War, 1775-1783.

Although Great Britain was now the world’s foremost colonial and maritime power, the national treasury was exhausted and a huge public debt of 136,000,000 pounds had to be paid off.

Surely, the colonists who had witnessed the four Colonial Wars would be willing to help with the debt.

A new Minister of Finance, “Champagne Charlie” Townshend authored the Townshend Duty Acts in 1767. The colonists had strongly objected to “internal” taxation, so have colonists participate in his philosophy of “external” taxation or not pay taxes on products directly at time of purchase.

Townshend placed duties on glass, lead, paint, paper and tea at the point of importation. Colonial opposition saw a nonimportation agreement, people dressed in homespun, tea was planted in New England and the southern colonies tried to cultivate silkworms.

Townshend, no friend of America, died in office. His successor, Frederick, Lord North, secured the repeal of all the Townshend duties except the tax on tea, 3 pence per pound. The residents of the 13 colonies did not want to be taxed by a legislature 3,000 miles away where they were not represented.

The loudest voices of colonial dissent belonged to James Otis and Samuel Adams. Otis outshone Adams until 1769, when he was injured in a tavern brawl.

Adams had originally sought to become a minister, but changed to law. He was afflicted with palsy and suffered from asthma. He had failed in business and led the Boston mob. He had nothing to do, except inspire resistance to British measures. He would frequent Boston’s taverns and let others buy him flip — hot ale with milk and eggs mixed in.

Samuel Adams will become known as the “Father of the American Revolution.” He would be the first important British colonist to advocate independence from England. It was Adams who would call the accidental firing on March 5, 1770, the “Boston Massacre.”

The Tea Act of 1773 brought protest, more because of principle than the tea’s price. The British East India Company had a monopoly on all tea imported into England. The company had to pay one shilling import duty per pound of tea.

In 1773, the company faced possible bankruptcy because it had 17 million pounds of tea in its warehouses along the Thames River. This was Bohea tea from the hills of Fukien, China. England could not use so much tea and the English colonies smuggled their tea from the Netherlands. Tea will mildew and rot after a long period of time.

King George and Lord North decided to assist the British East India Company by letting it sell its tea to the colonies directly for 10 shillings a pound plus 3 pence duty per pound. This price was far below the cost of smuggling it and this tea was probably the best in the world.

It was thought that such a reasonable price for this Bohea tea would convince the colonists to respect British taxing policies. The British East India Company sent 1,253 chests of tea to the colonies because it could not pay import tax into England.

With the repeal of the Townshend Duties, there came a lull in revolutionary activity and merchants in the colonies lost their desire to oppose the Empire and Parliament. In April 1773, Parliament passed the Tea Act. The British East India Company’s tea now became cheaper than tea sold in England and cheaper than tea bought from the Dutch.

Parliament knew Americans consumed a lot of tea and felt they would not pass up such a bargain. The company sent tea ships to Charleston, Philadelphia, New York and Boston. The tea was consigned by the company to “safe” merchants who had no quarrel with the company or Parliament.

A half-million pounds of company tea came across the Atlantic, but never reached the tea agents, some of whom resigned. If a colonial governor signed a release document, the tea was not landed and the ships took their cargo of tea back to England.

Sam Adams, master propagandist, stated that after Americans bought the cheaper tea, it was only a matter of time until the company increased their prices since they had a monopoly. Colonists must reject the tea.

At Charleston, the tea was landed and put in moldy quarters and later auctioned off to raise money for the Revolutionary War. Tea ships coming to New York and Philadelphia were sent back to England. Forty-five tons of tea came on three ships to Griffin’s Wharf in Boston.

At a town meeting, residents of this town of 20,000 vowed never to pay the tea tax. An “indignation” meeting (anger caused by an unjust act) was called for on Dec. 16, 1773, at Old South Meeting House. Seven thousand people attended and were told the governor of Massachusetts, Thomas Hutchinson, would not release the three tea ships in the harbor. Two of his sons and his nephew were tea agents to whom the company had sent the tea. Samuel Adams mounted the pulpit and yelled, “This meeting can do nothing more to save the county.” This statement expressed Adams’ ultimate goal – independence.

At the conclusion of the meeting, between 100 and 200 men dressed themselves as Mohawk Indians and marched to Griffin’s Wharf. They had blackened their faces and hands with soot, lampblack and burned cork. They were there to throw the tea into Boston Harbor. Each carried a hatchet or ax.

John Hancock, “King of the Smugglers,” Sam Adams and a large crowd cheered them on during their three hours of destruction. One of the “Mohawks” later stated that he had exchanged the countersign with John Hancock, “An Indian grunt followed by ‘me know you.’”

At the Boston Tea Party, 342 big chests of tea were poured into the harbor. The destruction of the tea at Boston was estimated to be between $75,000 and $90,000. The British squadron, less than a quarter mile away, made no effort to intervene.

The British Empire had a choice – crack down on the colonies or let them have their way. King George III was furious and wrote in anger, “The die is now cast. The colonies must either submit or triumph.” The British crackdown resulted in the American War for Independence (1775-1783).

– While at the University of Rio Grande, I took 35 students to tour New England. Our school bus broke down in the mountains of Pennsylvania. It was a rural area and parts had to be brought from a distant source. Many hours passed as we sat in Pennsylvania.

I had a prearranged schedule to walk the “Boston Freedom Trail.” We arrived at Griffin’s Wharf in late afternoon and were told by the officials on the reconstructed tea ship that our tardiness had caused us to forfeit our “Tea Party Appointment.”

My students wanted to throw tea into the harbor, so I verbally pressed for the official’s sympathy. I was told that a party of European diplomats would be there at any moment. I told them we had worked hard to raise money for this trip and that, although we were from Appalachia, we loved history and had come a long way. The ship’s officials would either “submit or triumph.”

We held a contest to see which student could throw a wooden box attached to a rope farthest out into Boston Harbor. The students enjoyed the Boston Tea Party experience and we prepared to tour Plymouth Plantation and Salem, home of the witchcraft trials, the next day.

Doug Johnson: The power of prayer helped build a church for thousands