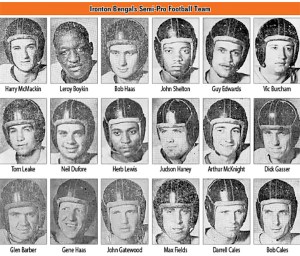 Ironton and the sports world knows about the famous Ironton Tanks.

But the Tanks were the only semi-professional team to have played in town.

During the 1948 and 1949 years, fall football on Sundays consisted of the Ironton Bengals.

One of the remaining players from those teams is Herb Lewis who said players received between $20 and $50 per game, the equivalent of $240 to $549 in today’s world.

When Herb was playing with the Bengals, he was in the middle of a professional boxing career and played under the name of Harold Lewis.

Lewis was a running back on the Ironton Bengals, a tradition that continue for the Ironton Fighting Tigers.

Of the group, Gabriel, Steven, James, Ray, Tony, Darius and Terrence were all running backs. Gabriel and John were on the 1979 Class AA state championship team and Gabriel signed with Eastern Kentucky. Darius signed with Marshall.

According to a program from that era, here are the players and the descriptions about each one:

Harold was a speed merchang in the Ironton High School backfield during the 1947 season. He is 5-foot-9 and weighs 165 pounds. He is used primarily as a “scatback.”

Nicknamed “The Bear” by his teammates following an exhibition game at Logan, Boykin played as a lineman for Ironton High School in 1947. He was 5-8 and weighed 230 pounds.

Answering to the nickname “Longface,” Vic played with Ironton High School in 1943 and spent service time with the Navy. He was 5-6, 162 pounds.

Neil was chosen All-County while playing his high school ball in Columbus. He played two years with the Georgia Bulldogs. He was 6-foot and 205 pounds.

The “Lonesome Pole” played with Ironton in 1934 as a fullback. The 5-11, 190-pound Gasser moved to tackle to bolster the Bengals’ line. He was in the Navy during World War II.

“Sonny” Haney played with St. Joe during the 1942 season and was with the U.S. Navy for several years during World War II. He played some service ball and was 5-10, 177 pounds.

Tom played for the Ashland Tomcats in high school. He was 5-7, 173 pounds.

Better known as “Junior,” Arthur played for the Coal Grove Hornets. He served with the Navy during World War II. He was 5-9 and 165 pounds.

Called “Fuzzy” because of his closely cropped hair, he played for St. Joe during the 1944 season and was with the U.S. Navy during World War II.

John played football for Ironton High School and with the U.S. Navy base at Philadelphia, Pa. He was 5-10, 171 pounds.

Playing his high school ball at Marion, Ohio, Wilson was with the U.S. Navy during World War II. He was 5-10, 168 pounds.