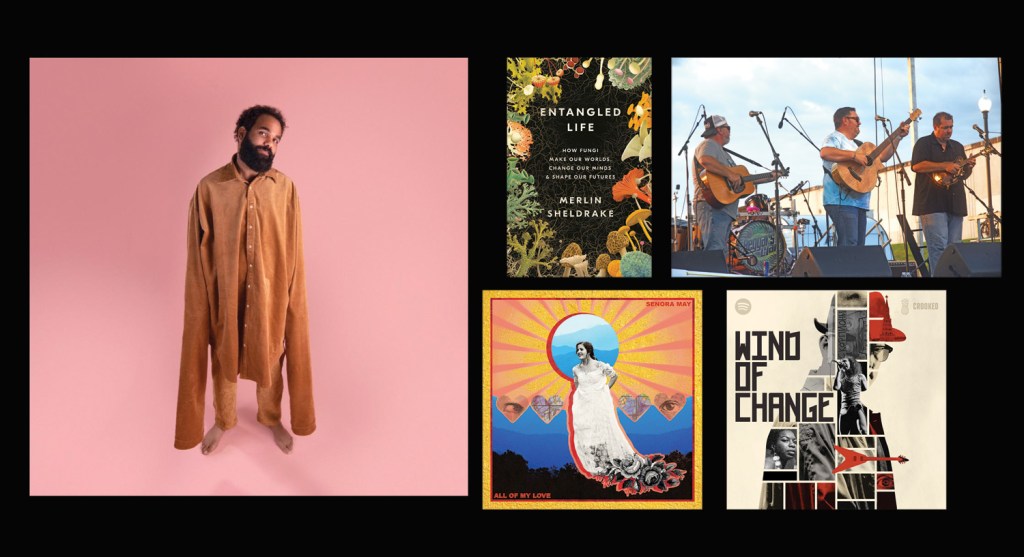 1. Corduroy Brown – in his Lazarus year. Nobody had a year like Alan Brown, the OUS graduate known as singer/songwriter Corduroy Brown. In February 2021, Brown coded in the ICU while battling COVID-19 on a ventilator. Literally crawling back from the dead, Brown gathered all-star friends creating a powerful, poignant and rocking 10-song album, “Let Me Know,” that chronicles his miraculous journey. After the August release, Brown’s live-wire shows have been some of the most emotional performances I’ve ever witnessed with Brown smiling, laughing, sometimes still gasping for breath, hard-rocking, dancing, singing songs like “Die Happy,” and “To My Younger Self” and celebrating life and love out-loud, Listen to the album at https://corduroybrownwv.bandcamp.com

2. The Return of Live Music and Festivals – Live music roared back to life in the Tri-State with the Ohio River Revival in Ironton, the new Foxfire Music and Arts Festival in Ashland, the Fly-In Festival in Huntington, Portsmouth’s Final Fridays, the Mountain Stage April football stadium show at Marshall, and the Labor Day weekend, the Huntington Music and Arts Festival. Celebrating its 11th year, HMAF put together a week of diverse DIY events and for its main event two dozen regional acts including a string of ringers like Holly Forbes, who would become a Top 10 finalist on NBC’s The Voice; John R. Miller, a West Virginian nationally touring thanks to a new Rounder Records deal, and dressed up as superhero running through the crowd, up-and-coming WV hip hop act Shelem, one of the Tri-State’s break-out acts of 2021.

3. “Entangled Life: How Fungi Make Our Worlds, Change Our Minds & Shape Our Futures,” by Merlin Sheldrake. I didn’t read books as voraciously as I did during the 2020 lockdowns, but my hands-down favorite book in 2021 was this mind-blowing mycology book by an English biologist. There’s hardly a page turned that wasn’t a jaw-dropping revelation about this diverse kingdom of organisms that support nearly all living systems. It was both exhilarating and humbling to learn that fungi are the largest and strongest organisms on the planet, can heal bodies and minds, are being used to remediate environmental disasters and can solve mazes. Mind blown. Go online at https://www.merlinsheldrake.com/entangled-life

4. Wind of Change – So Dec. 26, 2021 is the 30th anniversary of the dissolution of the Soviet Union. For kids of the 80s and 90s heavy metal scene, a really timely and entertaining podcast series is Wind of Change. Go down this series’ rabbit-hole to hear New York writer Patrick Radden Keefe chase down a rumor from a friend of his (who was in the CIA) that the CIA actually wrote the Scorpions power ballad smash, “Wind of Change,” that’s been called the song that ended the Cold War. Episodes investigate this and shine a light on the Russian underground rock scene, interviews with wild and crazy rock manager and promoter, Doc McGhee, who organized the first rock fest in Russia, and with Scorpions lead singer Klaus Meine. You can find out more at https://crooked.com/podcast-series/wind-of-change/

5. That’s What She Sang – This past year has been a banner one for many of our regionally-based female artists. Valentine’s Day saw the release of a beautiful new album, “All My Love,” from Senora May, and produced by Jessica Lea Mayfield. Summertime brought my favorite record of the year – the August-released “Long Time Coming” (Rounder Records) by Charleston, West Virginia native Sierra Ferrell, who is selling out venues all over the U.S. Also in summer, Huntington’s new Foundry Theater and The Good Times Show with Michael Valentine started a new series of female-sang shows called The Mountain Mamas. And, veteran Charleston-based band The Carpenter Ants backed singer/songwriter Mary Hott, on an excellent album, “Devil in The Hills: Coal Country Reckoning,” touring with her to eastern Europe, as well as performing with them on Mountain Stage.

This fall ushered in the long-awaited Sasha Colette and the Magnolias incredible new album, “Here to Stay,” that includes a stringer of keepers, such as “Youngbloods,” “Getaway” and “Marilyn.” Oh yeah, and the Oct. 8 release party at The Loud, came complete with an on-stage wedding of The Magnolias’ drummer Steve Barker. The year closed out with the Tri-State rallying around Holly Forbes, one of the sweetest people, during her chair-turning, jaw-dropping run on NBC’s The Voice into the coveted Top 10. Forbes closes out the year with a NYE show at The Paramount Arts Center in Ashland with fellow Eastern Kentuckian, Jeremy Short and Short and Company.

Dave Lavender, a Franklin Furnace native who lives in Huntington, has worked in local journalism for more than two decades and is the Apprenticeship in Motion AIM WV coordinator at West Virginia Development Office.

Doug Johnson: The power of prayer helped build a church for thousands