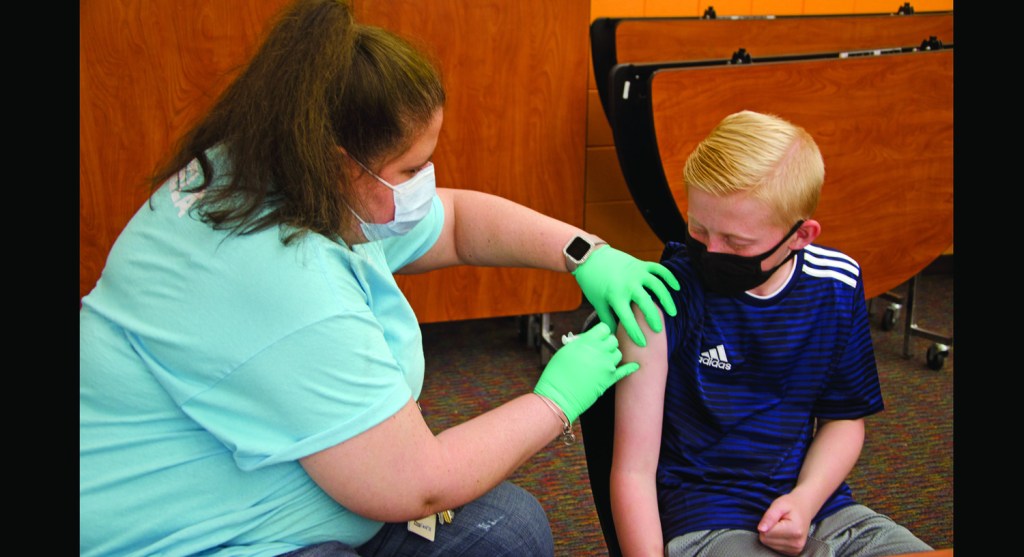 1. COVID-19
Everyone wishes it wasn’t so, but, unfortunately, the COVID-19 pandemic still dominated headlines this year.

The Lawrence County Health Department worked diligently all year to administer vaccines to the population, hosting clinics at a main location at the South Point Board of Education office, as well as at the health department, in schools and at events throughout the region.

The vaccine was first given to older and at-risk groups, then, by spring, was available to all adults. In the fall, booster shots were available, as well as vaccines for children.

While things seemed to be clearing up in the spring, and the Ironton-Lawrence County Memorial Day Parade and the Lawrence County Fair returned as cases numbers dropped, as the year progressed, both the Delta and Omicron variants of the virus kept the county in the red for high transmission.

Schools struggled with the situation, with the pandemic continuing to impact both the classroom and sports.

All but one school district in the county, Ironton, began the academic year with no mask requirements but, within weeks and cases on the rise, districts changed course and all in the county adopted a policy mandating facial coverings for students and staff.

As the Christmas holiday began, the health department reported that Lawrence County has seen 11,269 cases of COVID-19 since the pandemic began, 721 hospitalizations and 182 deaths. 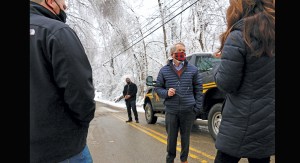 2. Winter storms
The Tri-State area was brought to a standstill in February, with three winter storms hitting the region hard.

The first brought ice, the second, the most severe, had ice and snow, and a third consisted of only snow.

Residents throughout the area listened as the sounds of buckling trees and branches filled the night during the first two storms. Thousands were left without power and many roads were blocked and impassible.

Restoration of power was a long wait for many in rural parts of the county, with remote lines and poles presenting a challenge for crews from AEP and Buckeye Rural.

In the immediate aftermath of the storms, Gov. Mike DeWine visited Lawrence County, hosting a press conference at South Point High School before touring the hardest hit parts of the county. DeWine activated the National Guard to assist the county in its cleanup.

The impact of the storm lingered into late spring, with volunteer groups, such as teens from Maumee United Methodist Church, located in northern Ohio, continuing to help with cleanup on private properties.

3. New Lawrence County Jail
Built in 1974, the Lawrence County Jail was state of the art at the time but as the years passed, the demand for more cells increased and there wasn’t a workable solution until October, when Gov. Mike DeWine announced the county will be getting $16.8 million to fund a new jail facility. Details about total costs, location and when construction could possibly start are still being worked out. DeWine was supposed to make an appearance in Lawrence County but canceled after being exposed to someone with COVID-19. 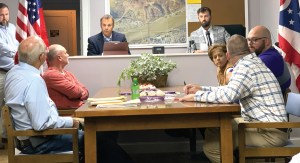 2021 was a chaotic year for Chesapeake. It began with the village council removing Randy Thompson as police chief in February, replacing him with Steven Woodyard.

Then, in the summer, a recall petition against Mayor Kim Oldaker was filed, but ruled invalid by the county board of elections.

In October, the village was left with little of a government when Oldaker and four council members abruptly resigned, citing disagreements with council member Paul Hart, as well as those who were running unopposed for three seats in the November election.

At November’s council meeting, Ittig, now mayor, moved to fill the vacancies, naming the three candidates, Lisa Blake, Jacob Wells and Drew Griffin who were set to start their terms in January, to immediately fill those seats. They were joined by Katie Bentley and Marvin Henson, who Ittig chose for the other two vacancies, one of which was his former seat.

Following the appointments, at the same meeting, the council then voted not to retain Woodyard as police chief. This was met with the resignation of two officers.

Sgt. Josh Sammons, the highest ranking of the remaining officers, was named as interim chief.

The year also saw the resignation of street commissioner Danny Burd and fiscal officers Theresa Lawless and Lennie Abrams. Abrams returned when he was named as interim fiscal officer in December, in order to continue to help the village prepare for an audit from the state.

5. Grocery store changes
In April came surprising news that the Bartram and Son grocery store was being closed and the staff was being merged with those at a new Food Fair grocery store in the Ironton Hills Plaza, the site of the former Pick ‘n Save, which closed in the spring.

Bartram and Son was bought by Forth Foods Inc., which owns 16 stores in the area. Tim Forth, the owner and president of Forth Foods Inc. and owner of Ironton Food Fair, said the two companies had worked together for many years and they ran with the Food Fair program, although they chose to run it under the Bartram and Son name. 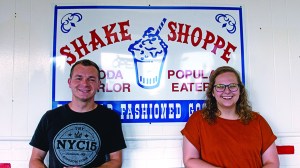 6. Shake Shoppe lawsuit
One of Ironton’s most popular businesses found itself sued in federal court. Maddie Cogan and Robbie Brown, owners of the Shake Shoppe in Ironton since 2019, were sued by Shake Shoppe LLC, the company of the Gallipolis Shake Shoppe, which has been owned by three generations of the Snedaker family since the 1950s.

In the 1950s, six Dairy Queens in southern Ohio, located in Ironton, Gallipolis, New Boston, Jackson, Logan and Portsmouth, saw the patent on their soft serve machine with the company expire. As a result, the six businesses decided to rebrand as the Shake Shoppe, forming a business agreement. They used the same signage, but were individually owned. Of the remaining three locations, only the Gallipolis is run by the same family who originally owned it.

In the suit, Shake Shoppe LLC cited slogans and imagery, which they said were drawn by hand by original owner Marge Snedaker and used as early as 1956. Shake Shoppe LLC had those items trademarked with the state and federal government.

The logos and designs were made into digital renderings and have been used by Shake Shoppe LLC since at least 2015 on social media sites and to make clothing items. The use of the logos on social media, on the Ironton shop and on T-shirts is the issue in the suit. The name and imagery have been used by the Ironton location since the 1950s, under its original owners, the Salisbury family, then two successors, before Cogan and Brown bought the location in 2019.

News of the lawsuit saw a surge of support for the Ironton location, with posts on social media, supportive T-shirt sales and an increase in traffic by those who wanted to back the location. 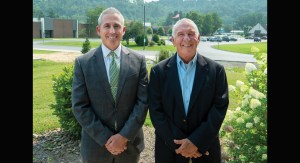 One of the most significant figures in education in Lawrence County wound down his career in 2021, when Steve Dodgion, the superintendent of Collins Career Technical Center for 19 years, retired in July.

Dodgion worked in Lawrence County schools for 47 years, with all but five of those being at CCTC, where he also served as assistant superintendent before taking the top job.

He was hailed by faculty for his work expanding CCTC’s offerings and overseeing a growth in its student body, with the school serving more students than any other vocational institution in Ohio.

In addition to being hailed for developing CCTC’s health programs, Dodgion said he was most proud of launching the Project Lead the Way STEM program 14 years ago, one of the first in the state to do so.

As Dodgion departs, the PLTW program is set to expand with the addition of an aviation program.

He was succeeded by Adam Pittis as superintendent.

8. Live events return
In 2020, most local live events were downsized or canceled altogether because of state orders about large groups gathering in an effort to curtail the spread of COVID-19.

After the COVID-19 vaccine roll out in the spring, many events returned in full force like the annual Ironton-Lawrence County Memorial Day Parade and its associated events, the Lawrence County Fair, Ironton Wizardfest and the Ohio River Revival.

Brad Bear, one of the organizers of the Wizardfest, said crowds were happy to be back in Ironton and take it to the “next level.”

The new Russell, Kentucky viaduct bridge was completed in November and Kentucky Gov. Andy Beshear made a surprise appearance to open it up.
In South Point, the Solida Road roundabout is being expanded by the Ohio Department of Transportation.

And ODOT announced a proposed roundabout for the intersection of U.S. 52 and State Route 93 in Ironton in an effort to reduce the number of crashes in the area. The plan calls for the construction of two single-lane roundabouts on State Route 93, one on the north and south sides of the U.S. 52 interchange, replacing signalized intersections. These would be designed in 2022, with construction expected to start in May 2023 and wrap up that October. 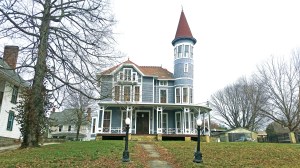 The Tower House in Ironton. (Mark Shaffer | The Ironton Tribune)

10. Tower House on TV
Thanks to an Instagram post, one local house gathered a lot of attention on social media and even ended up featured on national television.

The whole media sensation began with Heather Williams, a realtor with the Proctorville-based Bunch Real Estate Associates. She was in the process of selling The Tower House and had posted it online and then the Finkelsteins saw it.

“I guess they saw the Tower House after I posted it on Historical Houses of America,” Williams said. “They contacted me and they had chosen, I think five houses in Ohio, and this was one of them.”

In our upcoming Wednesday edition of The Ironton Tribune, we will look at notable residents of the Tri-State who passed in 2021.