Who-Dey Moms remember their work behind the scenes 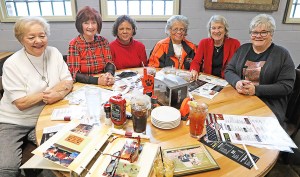 Some members of the Who-Dey Moms held a reunion on Saturday, Dec. 18, at the Armory Smokehouse in Ironton. The Who-Dey moms were mothers and some other volunteers who raised money and contributed various needed items and food for the 1988 and 1989 Ironton Fighting Tigers’ football teams. Those attending were: from left to right, Sharon Price, Susan Sheridan, Jenny Pleasant, Dorsey Conwell, Connie Lowe and Evie Brown. (Photo By Tim Gearhart) 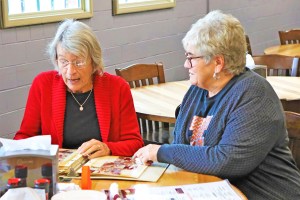 Who-Dey Moms Connie Lowe (left) and Evie Brown (right) look through the scrapbooks of not only the 1988 and 1989 Ironton Fighting Tigers football teams, but the activities the Who-Dey Moms conducted as a booster group. (Photo By Tim Gearhart)

And when it comes to a great team and a great coach, behind them is the Who-Dey Moms.

During the 1988 and 1989 football seasons, the Ironton Fighting Tigers put together the two best runs in the program’s history.

The 1988 team finished runners-up in Division 3 during the era of only five divisions of football as they lost 14-12 to Akron St.Vincent-St. Mary’s in a game that had two controversial calls at critical times and both went against Ironton.

The 1989 team returned to the state finals at Ohio Stadium and beat Campbell Memorial 12-7 to the state championship.

With the state title came a celebration that was funded in a large part by the Who-Dey Moms, a name adopted from the chant by the Cincinnati Bengals’ fans “Who-Dey, Who-Dey, Who-Dey think gonna beat them Bengals,” in which Ironton fans changed the word Bengals to Tigers.

“We didn’t organize. We just sort of grabbed the kids’ parents and went to work,” said Dorsey Conwell.

The original group of moms who got together and then drafted the other moms included Conwell, Connie Lowe, Sharon Price and Jenny Pleasant. Others joined the group in rapid fashion including Susan Sheridan and Evie Brown.

That group of women met for a reunion organized by Conwell’s son Delandual on Saturday, Dec. 18, at the Armory Smokehouse restaurant.

“They were our boys and we decided to do stuff.

“We were planning on a state championship from the beginning of the season,” said Lowe.

There was an awards presentation ceremony in the high school auditorium but there was also a celebration dinner at the Ironton Elks Lodge.

“A core group of mothers said we’re going to do this and Sharon promised them a steak dinner if they won. We didn’t do it in the cafeteria. We wanted it someplace else and someplace special,” said Lowe.

There wasn’t anything the moms wouldn’t do in order to raise money. Any idea was given serious consideration.

“We did car washes and everything to make money,” said Conwell.

Besides car washes, the Who-Dey moms did bake sales, sold souvenir gifts like tiger tails to hang out of the back of car or on the antenna, tiger towels, T-shirts and other items.

“We did so much. We just had to make that money to celebrate,” said Conwell.

And there was one other major item the Who-Dey moms saved money to reward their sons and other players on the team.

“And we did the (championship) rings,” said Conwell.

The idea to raise money for rings hit hard after the tough loss in the 1988 title game.

“After their junior year, which they should have won, that made us more determined than ever, Anyway, it was good and we enjoyed it all. We knew our boys were the best,” said Conwell.

“They were undefeated in middle school and they stayed together,” said Conwell.

Many of the players from the 1988 team return to help lead Ironton to the state title a year later including Aaron Brown, Chris Wright, Scott Johnson, the team’s most versatile athletic in tight end Terry Lowe, Aaron Brown, Louie Sheridan, Danny Cox, Andy Neal and the five players who signed Division I scholarships: Delandual Conwell to Kentucky, Craig Pleasant to Morehead State, Heath Brownstead to Furman and both J.D. Cyrus and J.D. Coffman to Marshall.

“That was just a great group of kids and coaches,” said Lowe.

Bengals must prepare for Titans with thinned out D-Line