Tim Throckmorton: The happiest of New Year blessings to you 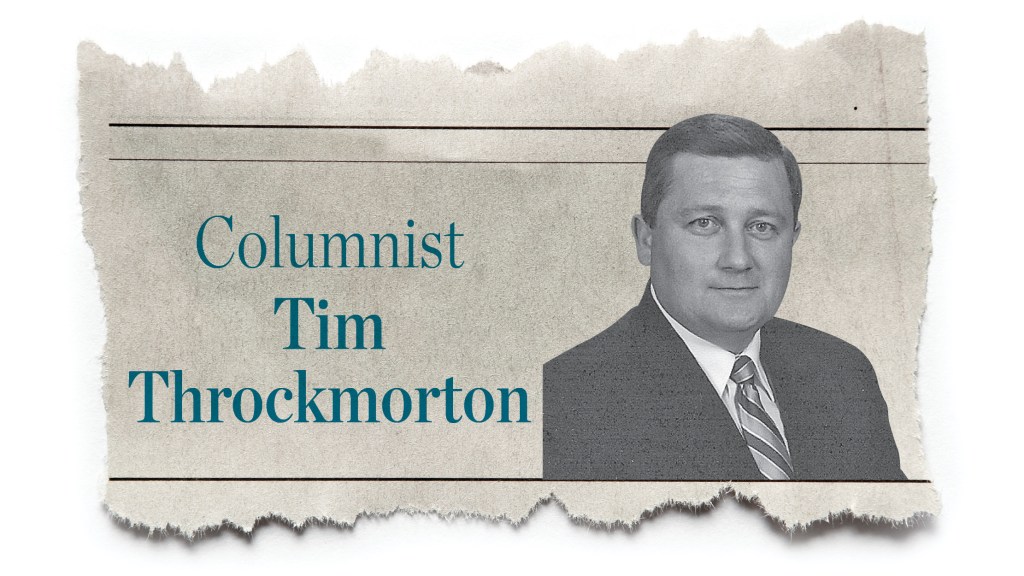 Be careful what you drop. It seems that this season of the year is synonymous with dropping things — dropping prices, dropping temperatures and of course those New-Year resolutions of dropping a pound or two!

What I am referring to here is the time-honored tradition of literally dropping objects as the New Year begins.

According to that bastion of information, Wikipedia, there are hundreds of just such occurrences scheduled to take place around this great nation this very week! For example, In St. Georges, Bermuda: A Bermuda onion made of papier-mâché covered in Christmas lights is dropped. In Tallapoosa Georgia: A stuffed opossum named Spencer is lowered. Prince Ann Maryland drops a stuffed muskrat in a top hat and bow tie named Marshall.

In Tucson, Arizona: a large replica of a Taco is dropped from the roof of the Hotel Congress. It is a 30-pound wooden flea that is dropped in Eastover North Carolina, and a carp (real but dead) caught by local fishermen weighing 25-30 pounds is lowered as the clock counts down in Prairie du Chine Wisconsin. In Ohio, we have the sausage drop in Elmore, the ball of popcorn in Marion and in Port Clinton a walleye fish named “Captain Wylie Walleye” is dropped!

My favorite, though, has got to be Mobile, Alabama, which hosts a 600-pound Moon Pie that is lowered from the RSA Tower in the “Moon Pie Over Mobile” festivities. That would be an ideal location for an RC Cola stand now don’t you think?

The scriptures give us some choice advice regarding what we need to guard against dropping in our lives. For example, we are encouraged not to drop our guard! Peter the Apostle would write, “Be sober, be vigilant; because your adversary the devil, as a roaring lion, walketh about, seeking whom he may devour: Whom resist steadfast in the faith, knowing that the same afflictions are accomplished in your brethren that are in the world.” The writer in Proverbs encourages us to

“Keep thy heart with all diligence; for out of it are the issues of life.”

Many of us remember watching Steve Irwin, the Crocodile Hunter. So many times we thought for sure he would be fatally bitten by a snake, crushed and killed by a crocodile or mauled to death by some wild beast.

It was a shock and surprise to learn how he died. Steve Irwin, though facing dangers daily, made it a point to be extremely alert and guard his body from any surprise attacks by the animals and things he encountered. The one area that he thought would not be vulnerable turned out to be the most vulnerable. It was not his limbs or head but his heart that was unprotected. The serrated, poisonous spine of a stingray pierced the 44-year-old Irwin’s heart. When God reminds us to guard your heart above all else for it impacts everything you do, He’s not talking about the physical organ of the heart but is referring to the core of an individual, his intellect, emotions and will.

We are also admonished to not drop our aim! Paul’s words to the church at Philippi give great advice here. “Brethren, I count not myself to have apprehended: but this one thing I do, forgetting those things which are behind, and reaching forth unto those things which are before, I press toward the mark for the prize of the high calling of God in Christ Jesus.”

Richard Newton writes, “There are a great many aims that people set before them in this world. Some aim to get great riches, others to get a great name, and others to enjoy great pleasure. But St. Paul tells us of an aim that is much better than all these. He says, “whether ye eat or drink, or whatsoever ye do, do all to the glory of God.”

Lastly we are reminded not to drop our words carelessly! Jesus makes a peculiar statement at one point during his sermon on the mount when he says, “Give not that which is holy unto the dogs, neither cast ye your pearls before swine, lest they trample them under their feet, and turn again and rend you.”

The dogs and swine here are representative of those who would ridicule, reject and blaspheme the gospel once it has been given to them. We are not to put forth the gospel of Jesus Christ in the direction of someone who has no other purpose than to trample it and return to his own evil ways. Discernment must temper our declaration!

Items will drop during a host of celebrations in the next few days. More importantly there will be the temptation for millions to drop their guard, their aim and even carelessly placed words.

I am however convinced that there is a God who not only loves us enough to remind us of danger but is well able to give each of us the strength and power to live a God honoring life in the year to come! May the coming year bring to you and yours the greatest of blessings! Happy New Year!