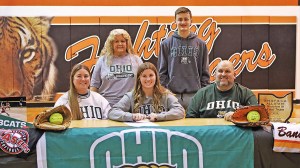 But with then unusual wealth of talent of Keegan Moore, this time the coaches made an exception. 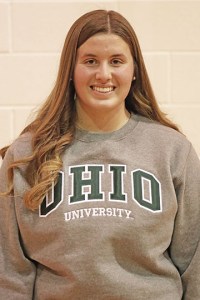 The powerful pitching of the Ironton Fighting Lady Tigers senior softball standout will be in the starting rotation next fall for the Ohio Bobcats after signing a national letter-of-intent on Thursday.

“They told me with the amount of money they are giving me I’m coming in as a starter,” said Moore with a grin.

There were plenty of suiters for Moore’s talents including several division one schools besides Ohio University.

“I was really looking at Kentucky, Miami of Ohio, Kent State. I had a few but OU just felt like home,” said Moore who joins position players Belle Hummel, Austy Miller and Shelby Westler in the early signing class.

“Where COVID hit, a lot of the big schools are losing money and the mid-majors who usually don’t get a lot are getting people who were D1. We’re getting girls who are coming from high travel ball teams. I think the little D1 schools are going to start to come up out of nowhere so I think we’ll be pretty good when I get there,” said Moore.

Moore was dominating last season as she earned not only the coaches’ District Player of the Year but first team All-Ohio honors.

Ironton lost virtually its entire team to graduation and entered last season with Kiandra Martin as the lone senior starter on a team comprised of mostly freshmen and sophomores.

Despite the youth and lack of experience, Moore said she didn’t feel any extra pressure to carry the team.

“Actually, I had a lot of confidence in that team coming up,” said Moore in a matter-of-fact manner.

“I took it as a challenge. I took them under my wing, we bonded as a team and we came together and I think we’re going to do bigger things this year than we did last year. That’s the plan.”

Moore is looking forward to another possible deep run in the tournament this season with her teammates.

“It was very exciting. No one knows the experience until you get there. It’s super fun. Definitely it’s something I’ll miss when I go to college,” said Moore. “The atmosphere is so awesome to be in. I love it. I’m praying we make it to state.”

Unlike baseball, softball pitchers throw with an underhand motion that allows them to pitch almost every day. Moore said she rarely gets tired but did admit to a few times that caused her to take a time out.

“I’ve had some scares with my arm, but for the most part I’ve grown and my muscles are pretty much solid now. If I take a long period off when I come back I’m sore, but during the season I’m pretty good. I’m not like ‘oh gosh, I’m not going to pitch this game,’” she said.

As a hitter, Moore batted a lofty .468 with 10 home runs, 44 runs batted in and 14 doubles — all team highs. Despite her hitting prowess, Moore doesn’t expect to imitate Anaheim Angels two-way player Shohei Ohtani.

“I would say no. Most colleges don’t just for the sake of getting hurt in the batter’s box or running. They’re looking at me probably just pitching. That’s it,” Moore said.

“I enjoy hitting in high school, but where you get to college the degree of pitching is a little different. They’re throwing rise balls, drop balls. Right now, (the pitching is) not super crazy.”

Because of COVID, Moore hasn’t been able to work much with her pitching coach at Ohio except once.

“She helped me a little bit with my drop ball, but we didn’t really learn a lot,” said Moore who works locally with Tina King.

Ironton has posted records of 26-2 in Moore’s freshman season when she helped lead them to the program’s first-ever regional tournament appearance.

Last season, Ironton was 27-5 last season when the Lady Fighting Tigers went one step further with a berth in the Division 3 regional finals.

All that leads to is the one big goal Moore has looming in the future.

“State champions,” said Moore who doesn’t really think that much about personal goals. “I want to do whatever it takes for my team to win.

“When I was a freshman, my goal was 1,000 strikeouts but losing a year has definitely effected that. I got my 500 strikeouts last year. I don’t think I’ll be able to get 1,000 in just a year. But I think team goals are the way to go and then your personal goals will just fall in line behind that.”

Moore understands that her journey from little league to college has not been something she has done totally on her own and she appreciates all the help she has received along the way.

“I just want to thank my family and friends for everything they’ve done, the coaches and all the support I’ve had at Ironton,” said Moore. “I moved here when I was a freshman and they welcomed me with open arms. It’s been fun.”